Problem/Issue: Recently apple has started rejecting application that has inApp purchase option but does not have Restore Button with below rejection reason

We have implmented similar solution in our App: Save The Monkey

In Save The Monkey all the assets /content related to inApp purchase was embedded inside the application, we did another interesting project called Magic Tricks Pro – Magic Trick Video Lessons which pulls the content from a server and the Transaction details of inApp purchase are also managed from server.  So if a user clicks Restore Purchases using a API we send request to our server to get all the previous receipts validated and accordingly all the video’s that the user had purchased earlier downloads on his device.

Below is Screen Shot of “Restore Purchases” implemented through server side code. 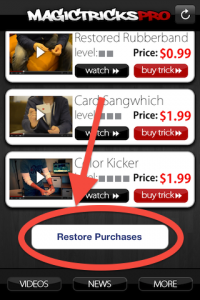 This case study was documented and contributed by: Jignesh Thakkar, iPhone App Developer at Space-O Technologies.

What to look for in an iPhone App developer for hire