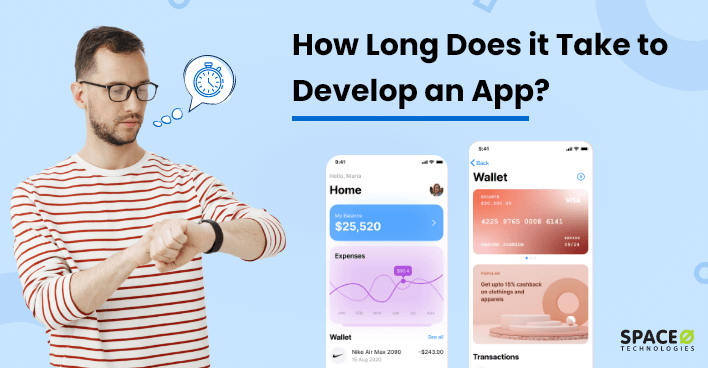 A great app idea is NOT enough to make an application successful.

You have to be faster on the market to disrupt it with your offered services or products, as millions of apps are already published on the app stores.

Therefore, it is essential that you know how soon you will be able to build an app and launch it into the market.

But how long does it take to develop an application?

If you are thinking the same, then here is a quick answer to it.

As one of the pioneers in offering the best mobile app development services in the USA, we have curated this guide based on our experience building over 4400 mobile apps.

So let’s get started.

How Long Does It Take To Develop an App Based on Types?

The mobile app development timeline ranges from 3 to 8 months. 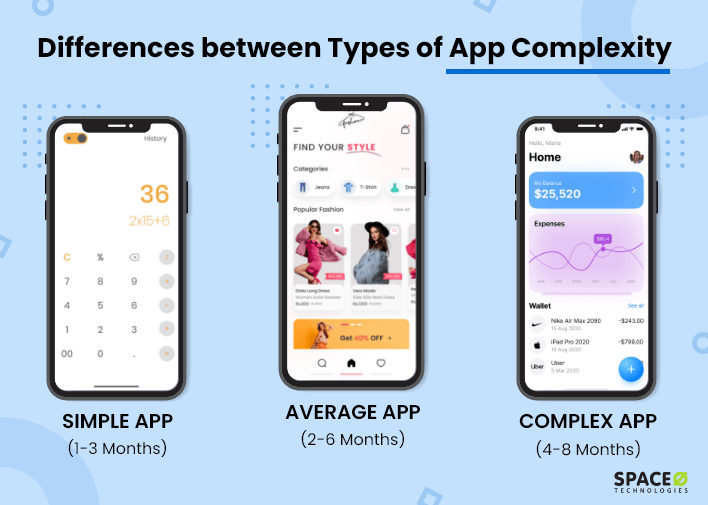 The following table shows the app development timeline based on its app complexity.

Want to Develop an App Within an Estimated Timeline?

Space-O is a leading mobile app development company to work with more than 1200 clients of different industries worldwide.

Now, let’s check how long does it take to make an app based on the app development stages. In the section, you will find the bifurcation of stages along with the estimated timeline. 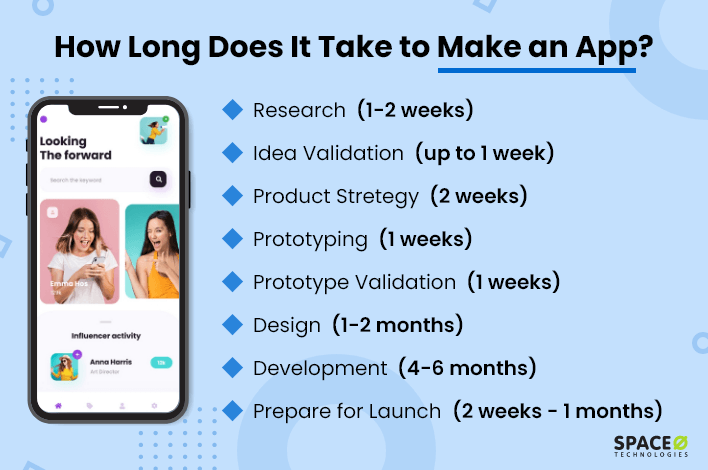 The mobile app development process is divided into 6 stages. We will discuss all the design and development stages and check how much time you would need to invest in each stage.

The first stage of developing an app is to conduct market research to ensure that you have a unique strategy and are able to reach the right audience in the shortest time.

The market research also involves some sub-categories that you can check in the following table, along with the estimated timeline.

Once the strategy and requirements are finalized, the BA team prepares a wireframe to help you understand the processing of the app. You will get to know how your app users will perceive all the features. Then, the team will provide a prototype to test the concept.

Generally, it would take 2 – 3 months to design an app.

However, having the answer to this question, which is a good app design practice will also make your design process faster. You should know that the designing stage is the most unpredictable part of the app development process as there are multiple times when a designer has to go back and forth to match your design expectations.

It also might be because of the fast-changing requirements or new technologies recently rolled out in the market. So to reduce the designing time, you can follow good design practices.

This is the longest stage where you would need to invest your maximum time. So as soon as the designs are finalized, the mobile apps developers begin to code the application. Here are the 3 different sub-categories in which the coding process is divided by the estimated timeline.

Once the app solution is built, the QA team checks the application’s features to ensure the app runs seamlessly and is 100% bug-free. The team will also perform manual and automated testing for the code, usability, security, and functionality to make it launch-ready.

Note: The mobile app testing timeline depends upon the complexity and size of the application.

The release of an app goes through different stages; alpha and beta. The alpha release is an early pre-release version that is generally performed by the quality testers within the organization. On the other hand, the beta release is the final launch on the app stores. Therefore, having a clear understanding of how to launch an app will make the process easier.

How Long Does It Take to Build an Android App?

An Android app development timeline ranges between 2 to 9 months.

As every app is unique in itself, it is difficult to predict a fixed range to estimate the app development timeline. This estimation for timeline depends on various factors, such as the complexity of the app, features that you are implementing, UX/UI design, and the usage of third-party services.

Please know that in some situations, the timeframe also could reach more than 9 months for complex Android apps or when you are looking to build 2 separate native apps, an Android app, and an iOS app, instead of cross-platform app development.

Now, after discussing the development timeline for an Android app, let’s find out how much time you need to invest in building an iOS app.

How Long Does It Take to Build an iOS App?

An iPhone app development timeline ranges between 2 to 8 months.

However, developing iOS apps are much easier compared to Android apps in terms of timeline, costs, and efforts.

It is believed that Swift is Apple’s native programming language. Therefore, it is more convenient and requires less time to code iOS applications.

On the other hand, Android developers use Java or Kotlin to develop Android apps, which is a little more complex process.

So, with Swift, you have to spend less time coding, which means you are able to develop and launch your iOS quickly compared to Android apps.

If you are looking to build an app quickly, you must know that there are some factors that actually impact the app development timeline. Having an understanding of these factors will help you save time and, ultimately, the cost of app development. So, let’s discuss such factors. 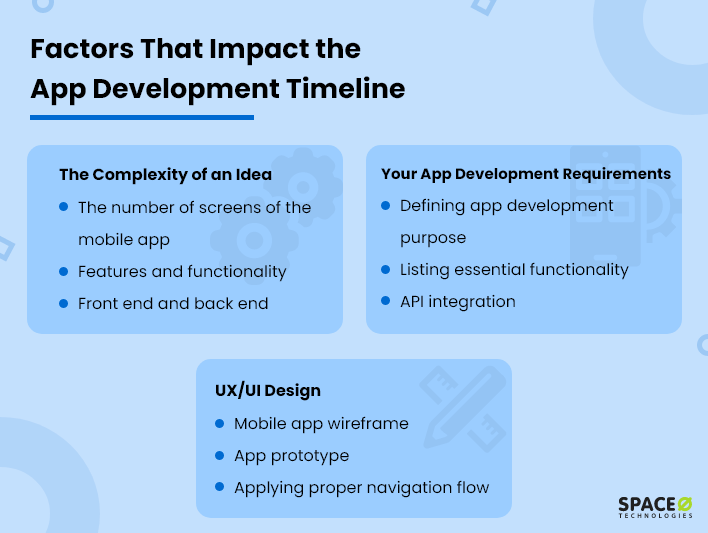 It is one of the major factors which not only impact the app development cost but the timeline as well. Certain things involved in the mobile app development process influence the complexity of the app and impacts the timeline, such as the number of features, functionalities, and app screens.

So when you develop a simple app with fewer complexities, you quickly build it within a few weeks. But when you are up to creating a complex app, which might take months to complete. For example, as simple as a PDF Scanner app will take 4 – 6 weeks to get completed, but a SaaS-based app like Uber may take more than 4 months to 6 months.

Your requirements also decide the estimation of the app development timeline. The features and functionalities that you want to incorporate will result in increasing or decreasing the time to build an app. Functionalities could include backend infrastructure, selecting CMS, or maybe opting for third-party API integration.

Here are the features that entrepreneurs generally opt to incorporate into their apps.

To ensure you save app development time, you must focus on applying a simple UI design. Otherwise, complicated designs will take longer because of the attractive design elements.

As UX/UI designing involves a lot of planning, strategies, and testing, having a complicated design will increase your development time. Also, it makes it difficult for the users to navigate the app efficiently.

Now, let’s discuss how you can develop an app within the pre-defined timeline. We are going to discuss the tips in the following section.

6 Tips to Develop an App in Decided Timeline

Want to Discuss Your App Idea to Get a Timeline Estimation?

Talk to us. Our technical consultants will review your requirements and help you with a roadmap, along with cost and average time to develop an app.

If you are still looking for more answers on the app development timeline, check the next FAQ section.

How many mobile app developers are needed to make an app?

Generally, a team of 5-6 mobile apps developers is enough to build a feature-rich application within an estimated timeline.

How much time does it take to get your app approved on the Google Play Store?

Usually, it takes 3 to 6 days to review your app for the authorities of the Google Play Store. This is because your app, by default, uses standard publishing, which is why your app will be published as soon as possible. But certain apps are subjected to extended review, resulting in reviewing and publishing your app for up to 7 days or more in some cases.

How much time does it take to get your app approved on the Apple App Store?

How much time does it usually take to get your first 1,000 app users?

Getting your first 1000 app users could take as less as 1 to 6 months or more. It entirely depends on your marketing strategies and efforts and the quality of the offered services.

Ready to Develop a Mobile App for Your Business?

Now, it would be easy for you to develop an app and quickly launch it within your estimated timeline. Get in touch with us if you are facing challenges in developing your app or want to discuss your app requirements. We will evaluate your requirements, devise a custom strategy, and suggest the best possible situation within your timeline.