How to Come Up With New App Ideas to Make Money? (And How to Validate Them!) 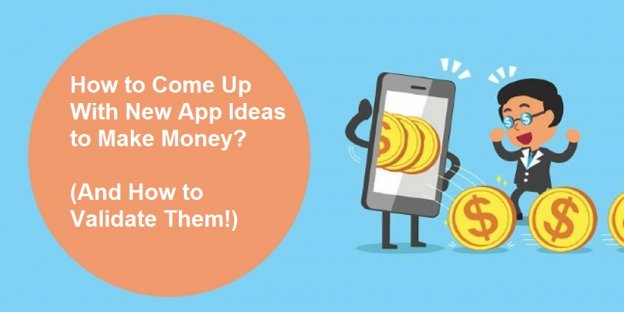 If you want to learn how to come up with new, good app ideas to make money and join the ranks of top app entrepreneurs, you’ve arrived at the right place. By reading this article, you’ll get a better idea of:

We’re into mobile app development services for almost 9 years, which is why we know for a fact that one of the best businesses to be in these days is the mobile app business.

We’ve witnessed many entrepreneurs establishing successful startups and businesses based on their new mobile app ideas and getting millions of dollars in fundings.

In fact, we’ve worked with dozens of them. Recently we developed MRSOOL, an on-demand app, which is ranked at number 1 position in Business apps category in Saudi Arabia. Furthermore, within just 6 months of launch, MRSOOL has already completed 600k+ deliveries and has been reached 300k+ downloads.

Another example is Glovo, an on-demand courier delivery app, that received €5M in Funding.

For further details regarding our previous works, please visit our portfolio.

Besides our clients, there are also many mobile app startups which are widely popular for their services. Uber is valued at over $60 billion. Snap just went public and has a market capitalization of $33 billion. Pokemon Go generated $1 billion in revenues in 2016.

Headlines like these always tempt us to go out, hire mobile app developers to build an app, and become famous. The only problem here is, It’s not that simple.

Moreover, many people still have the wrong idea about mobile apps.

1. Coming Up With New App Ideas to Make Money

To begin, the first thing you’ll need to do is come up with a good idea for creating a mobile app.

Ok, that was obvious. But the best way to come up with new app ideas is to find a specific problem and build a mobile app solution for that particular solution.

While you’re brainstorming or trying to find problems to solve, keep in mind to identify a problem that you have experience with.

For example, the founders of Uber, Travis Kalanick and Garrett Camp, had trouble hailing a cab in Paris where they were attending a meetup. So they came up with a simple app idea – Tap a button, get a cab. That’s how Uber was born.

Identifying similar problems like this will give a head start in knowing how to come up with a solution. Additionally, remember that there can be multiple solutions to any one problem. Take taxis, for example, there are multiple solutions available in the market for the same problem. Lyft, Ola, BlaBlaCar, Gett, and many existing taxi companies have also developed a mobile app solution for this problem.

Point is, don’t get discouraged if you see two or three apps solving a problem one way. Instead, think of a different approach that solves the same problem but in a more effective and cheaper manner.

Now, if you’re not being able to find a problem, then try tactics to get new app ideas.

2. Browse Through The App Store

Check apps in the top categories that interest you and find what problems other entrepreneurs’ apps are solving.

Secret Tip: Check top grossing apps in the chart to find what type of apps are best money-makers. 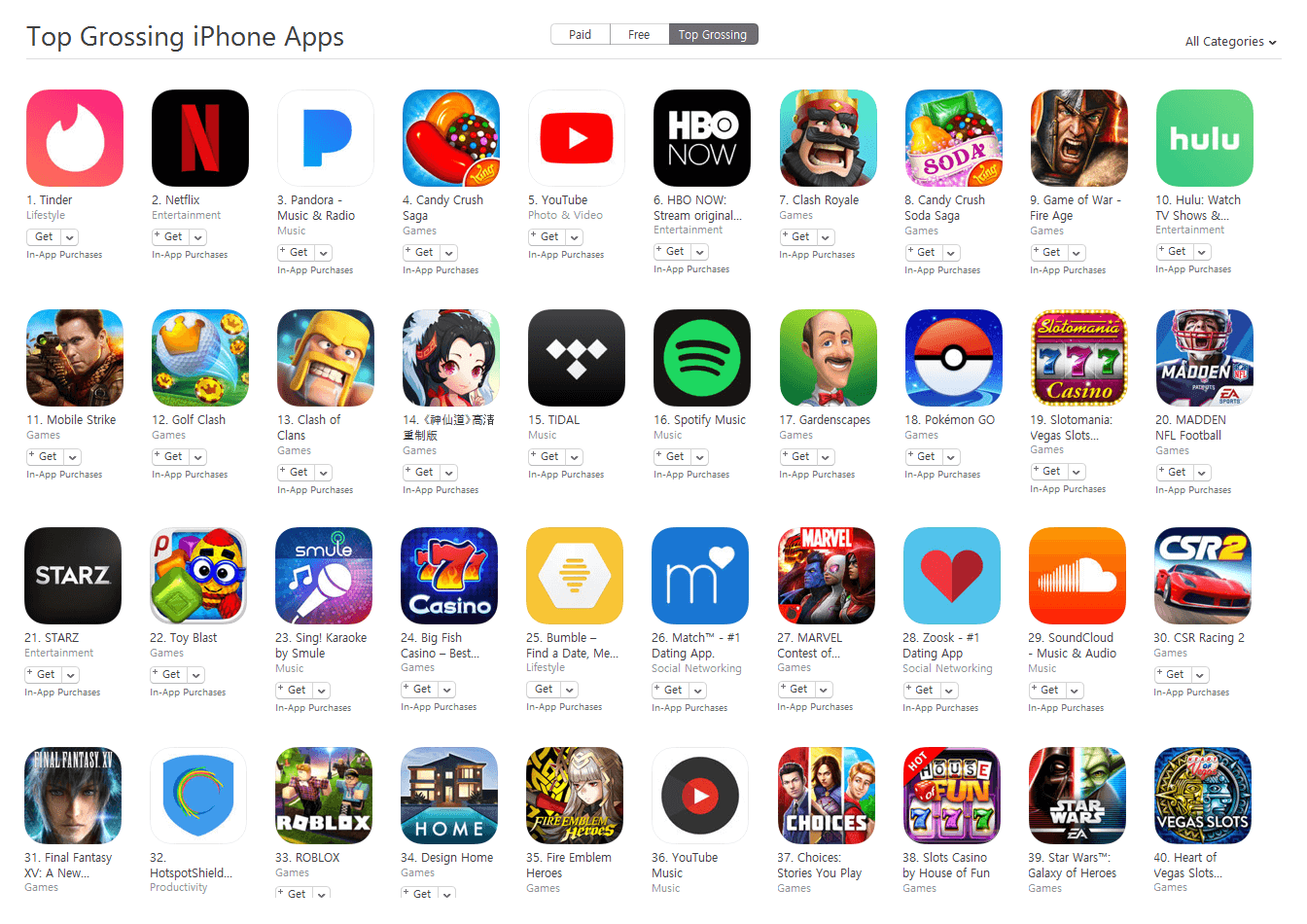 Next, think of keywords that are related to the categories which interest you. For example, you can search fitness, diet, marketing, productivity, traveling, etc. Search those keywords in the App Store to check what apps return and what kind of solutions they present.

Besides this, you can also go to the featured apps section in the App Store and see different categories of mobile apps featured in Google and Apple App Store.

Many times, apps are featured in a particular category/theme, such as Enhanced for 3D Touch, apps for medical patients, apps to track your time, and so on.

3. Study Outside The App Store

To find easy app ideas outside the app store, you can check projects on Kickstarter, browse through startups on Angel List, or also check the daily Product Hunt’s postings.

Find and go to startup pitch meetups and you’ll find yourself among like-minded people. To find local startup events, you can visit Meetup.com

By attending such meetups, you’ll get to hear some other people’s best app ideas. And even if you still don’t come up with an idea of your own after attending meetups, you will at least become more energized and motivated to come up with one.

Again, you can go to Kickstarter to find out which startups are getting funded currently. However, besides this, you can also regularly check VCs, accelerators, and other startup investors’ websites and blogs to find out what type of startup ideas they’d like to fund. For instance, you can go to YCombinator’s Request for Startups page.

The market that you are targeting will play an important role and it can have a huge impact on the success of your new mobile app idea. You can identify a lot of new and unique mobile app ideas by just analyzing the need of the market.

For instance, Brian Wong also came up with Kiip by just doing the same market research. When he was traveling abroad, he noticed that a lot of passengers were making their devices in order to play games. He noticed the on-screen ads that were little value to users. Then, he came up with the idea to allow game players to earn some real-life rewards for engagement. And Kiip was born.

Once you’ve come up with new app ideas, it’s time to do some digging before actually getting started with building an app.

Remember, this is the most critical and vital step which should not be skipped, as it makes sure that your money and time invested in converting your idea or website idea into a mobile app, will be well-invested.

Following are the various tactics that can help to validate your application ideas.

Find out apps that currently solve the problem for which you want to build an app, and insert those existing apps into the following tools.

Once you have an app idea, think of 5 different keywords that may describe your app and search for their volumes in any of the following keyword tools.

3 – Reach Out to Potential Users/Customers

Once you know there are enough people who might be interested in your product, it’s time that you reach out and ask your potential users what they think of your new app idea. Here’s how you can get started.

If your mobile app idea has made it this far, then congratulations, your idea is now among many great app ideas.

Now it’s a time that you get started with mobile app development.

The first step in creating a mobile app is a basic understanding of your options. Mobile apps can be developed in two formats.

Both looks and feels similar, but they’re quite different from one another.

While mobile web apps might seem like a better option, but the truth is that native applications have better advantages over mobile web apps. For example, it’s easy to retain your users with the help of push notifications and sending out new deals and discount offers. Another advantage is that you can always track app usage easily by users and take feedback from them to improve your mobile app to their likings.

Most importantly, app monetization with native apps is quite simple. You can monetize your app easily by way of advertisements, charging membership fees, in-app purchases, and some other proven ways. Now, there is no need to think about how to make money from apps, just work on differently proven ways.

Now, to keep the learning going along the side, you may also consider the following steps.

Building an app is one of the best ways to get into the startup world and make money with mobile apps. Consider all the above aspects to come up with new app ideas, and feel free to contact us if you’d like to know about the mobile app development process and our services. However, if you have any simple app ideas based on these concepts or have any query like how to create an app for free and make money, you can discuss it with us and we will suggest the best possible solution for you.

Have a Great Mobile App Idea? Get Its Accurate Cost and Free Consultation Now!

One thought on “How to Come Up With New App Ideas to Make Money? (And How to Validate Them!)”

How to Migrate Your Parse Data to Your Own Server?

What, When, Where and Why Node.JS?