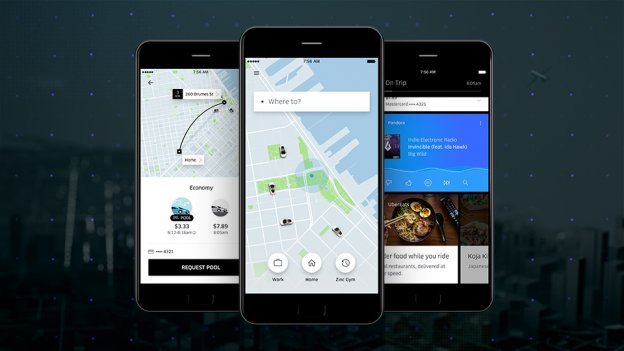 Recently, Uber did a design makeover. And this major redesign of Uber app has made its way to boost engagement ratio among its users around the world. The new design is significantly smarter, faster, and much simpler than before. All good things indeed!

All these things may seem like the most intriguing part of Uber’s upgrade, but the fact is – it isn’t. The best part of this upgrade is not how faster it loads or how it learns from your routines, but it is the Uber’s new reimagined feature – Uber Feed.

This particular feature – Uber Feed – is the reason behind the increase in the Uber’s engagement.

What is Uber Feed?

Feeling hungry on the way back home?

Swipe left to find UberEats card to discover which restaurant can deliver dinner to your house in sync with your arrival time.

Want to try a new dish?

A yelp card in Uber Feed will allow you to browse photos and reviews of popular dishes of nearby restaurants.

The idea is to have a set of information and experiences that are given to user while you’re in the car can make your ride better and more informed about your destination, Says Travis Kalanick Uber CEO.

Nevertheless, the point is, it’s not that only Uber can implement such features to increase its engagement ratio. The purpose of this article is to make you aware that if you too own on-demand service app, there are lots of possibilities that could expand your app as well.

What Uber discovered is that Nobody joyrides in an Uber, which is actually a true story. So Uber came up with a way to change it by helping its users beyond the transportation. This indeed makes lot of sense as it learn users’ routines and offers set of services based on it.

Of course, anybody can accomplish these tasks out of Uber app, but this was the main purpose of Uber – to keep its users engaged within their app. “Increasing the time that Uber’s users spend within the Uber app would make the Uber more relevant,” Says Hulick, UX Designer of Uber.

Although, things can get tricky a bit and it’s hard to do it well, but third-party integration is currently in trend.

Take WeChat for example. The messaging application from a chinese company has seen the success. Millions of China people use WeChat to do almost everything. Chatting with friends, playing games, even book a flight – all these without leaving the WeChat app.

Uber has the similar plans. The list in the Uber Feed will start small. The company will only offer UberEats at beginning. But soon, Snapchat, Pandora, and Foursquare are also joining the ‘Uber Feed’ party. Knowing all these, you can imagine that how broad the Uber app can expand with such features, which ultimately will boost their mobile app engagement ratio.

For instance, you could also expand your app by integrating news and/or weather features to keep your users within your app for longer. And even if you’re not an app owner, you can still hire developers to build a brand new Uber app clone to enter on-demand market.

By the way, have you read our article on How Uber-like Ondemand Services are Disrupting Traditional Businesses?

All in all, if you don’t cope up with the latest trends and features, it is more likely that you might fall behind your competitors. And everybody knows, when someone ‘steals the show’ and establishes their name in a particular niche market, it becomes more harder to compete them. Therefore, without wasting time, go on, try and integrate such features in your mobile app to witness your app success.

Create Uber For Tutors App To Disrupt The Education Marketplace