Before the arrival of local marketplace apps like OfferUp, LetGo, and Carousell, it was difficult for sellers to find and establish a connection with an ideal local buyer. But now, everything has been changed since the arrival of smartphone technologies. And if you’re one among aspiring brains who want grab the opportunity as soon as it arrives, just like Uber’s competitors did right after Uber became viral, then you’re at the right place.

Just like Uber and many other rapidly growing startups, OfferUp has caught the attention of investors and are already looking for entrepreneurs to establish a mobile app startup based on the lines of OfferUp. Although, building local marketplace apps like Offer Up would not result in the disruption of the local-buy-sell-used-products market, but it’s still possible to acquire a chunk of local market share, just like Uber’s competitors did.

As you might already know that while Uber is still one of the pioneers of the on-demand economy, but its competitors did receive a huge chunk of its market share. And if you’d like to know the details of Uber’s competitors and how well they’re doing in the same market as Uber, you can read our blog – List of 5 Car Pooling and Ride Sharing Apps That Are Doing Surprisingly Well, Despite Heavy Competition From Uber & Lyft.

Besides, even the OfferUp developers say that their users are now spending 25 minutes a day in OfferUp app, same as Instagram and Snapchat. That means it’s a great opportunity for entrepreneurs to build their own local marketplace app. 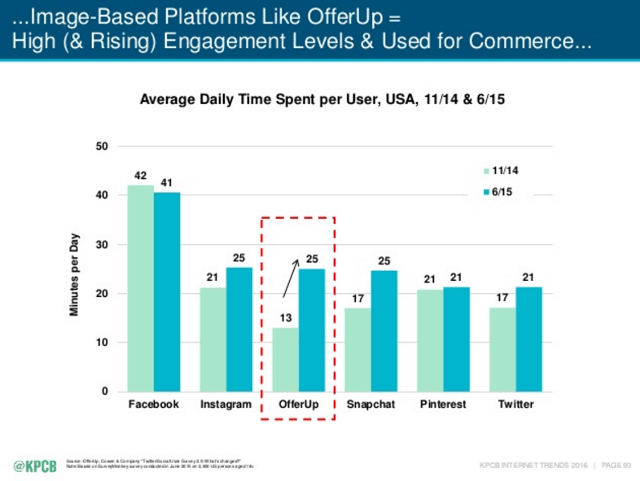 And you know what? The secret to success is not that complicated. In this blog, we’re going to explain how OfferUp and similar local online marketplace apps work and talk about their business model in detail so that you can too build local marketplace app like OfferUp.

How Does OfferUp Work?

The common functionality of apps like OfferUp is that they let sellers advertise goods/products free of charge. This way, people can easily sell items, for which they cannot find local buyers on eBay.

In simple words, OfferUp app allows users to sell their used stuff online in a particular area easily and quickly. The app is so easy that users can signup using their Facebook account. Once the signup is done, sellers can create an ad for the stuff/product they want to sell and connect with its potential buyers. And if a potential customer is found, seller and customer can communicate privately using inbuilt chat feature. In fact, sellers can also upload the pictures of the products they want to sell using inbuilt camera functionality.

Apart from the basic functionality, the OfferUp app also provides security because the app also allows its each user to build a reputation on their profile page. Similar to eBay, users can rate a person after a deal.

OfferUp and other similar marketplace apps like LetGo and Carousell have lots of things in common, just like Uber and its competitors, and one of the major similarities is their business model. Though, they claim that they don’t.

Nevertheless, all these local online marketplace apps are free for all users to signup and post any number of ads. As a matter of fact, they don’t even charge any kind of commission for a done deal between two parties. OfferUp founders intended to keep the service free of cost for everyone and available to everyone.

How Does OfferUp Make Money Then?

Internal Advertising: Internal advertising is quite a useful feature for sellers to publish action offers, special offers, or to include their ads in ‘system-recommendations’ section to land potential customers faster.

Online Transactions: You can allow customers to make payment directly through your local marketplace app. You can make money either by charging a fixed amount or a percent of every successful deal. For that, you can have your mobile app developers to integrate third-party payment gateways like Stripe or BrainTree.

Delivery Charges: You can also be a mediator between sellers and customers. You can hire full-time or contract with freelance delivery boys and offer delivery services to your users. This could be quite convenient for both parties and you will also have an extra stream of revenue.

Building MVP version of your mobile app idea is the best approach to test your concept in the market with real customers. That’s why we’ve described the must-have MVP features of a local marketplace app below.

Search Engine to find desired products: Remember that the ‘Search Engine’ feature is the heart of your local marketplace app. The reason is that once you have a wide user-base and number of ad listings, it will be difficult for customers to find their desired products from thousands of published ads. And that’s where search engine feature will come to rescue.

Filters and Sorting Feature: Filters and the Sorting feature is highly recommended to make the search process fast and easy. With this feature, you can minimize the search time for your customers, which can contribute towards making the user experience of your local marketplace app better.

Ability to click Pictures to Include in Ads: Bear in mind that the ability to click pictures of products features for the seller is necessary. And, it would be a great advantage for them if you can also include the capability to edit clicked pictures, crop them, and adjust its brightness and contrast.

In-App Payment Solution: With an In-App Payment feature, you can allow your customers to directly pay online. Customers, for instance, will have to enter their credit/debit card information for the only first time they use, and can instantly pay to confirm the purchase of a product they don’t want to miss out.

Delivery Feature: As discussed in the monetization strategy, the Delivery feature could be beneficial to both parties – You and your end-users. You, for instance, can make an agreement with freelance couriers and charge your end-users who want their purchased products to be delivered at their address.

Now, if you’ve limited budget and getting the cost estimate of building these features out of your budget, then we’ve already created a comprehensive guide for low-budget entrepreneurs on how to outsource MVP mobile app under $20K. You can refer this guide to learn how to build iOS app within your predefined budget while cutting down on costs.

Lastly, to create your own community of local sellers and buyers you’ll have to attract as much attention as you can. And if you want to build local marketplace app like OfferUp, you can hire mobile app developers from Space-O by filling out the below form and share your idea. We would be happy to help you develop the next best local marketplace app.

On Demand Apps Like Taskrabbit Are Shaping The World Around Us. Want To Be Part of It?