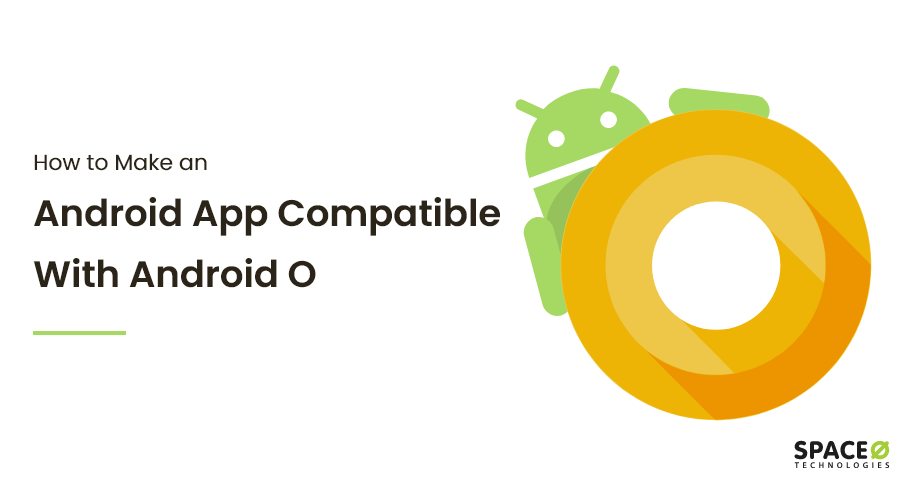 The final Android O developer preview is out. This means, the official consumer release of Android O isn’t far away. However, there’s still time left to make an Android app compatible with Android O. This android application development tutorial will help to prepare your Android app for Android O compatibility without any hindrance.

The Android Beta Program provides an opportunity to try out pre-release versions of Android. Basically, it helps Android mobile app developers to test their apps in upcoming Android versions to make sure that their Android App is compatible with the new version and runs smoothly.

The Android O consumer launch is quite near, which is why it has now become quite crucial for Android App developers & owners to make their Android app compatible with Android O.

By doing so, it will give your Android users a seamless transition to the new platform as it arrives. And if you haven’t tested your Android app for Android O compatibility yet, do it now. The process is pretty straightforward.

Just enroll your supported Android device in Android Beta Program as we mentioned earlier and get the latest update over-the-air on you device. After that, install your Android app from Google Play Store and test!

Your Android app should look good and it should handle the latest Android O behavior changes properly. Although, the Android O has introduced various features, APIs, and also includes changes which might affect the behavior of your Android app. But, to help you prepare, we’ll explain how to perform compatibility testing of your Android App.

How to Ensure Compatibility with Android O

The main purpose here is to make sure that your existing Android app works as-is in the latest Android O. Now there might be some platform changes which may affect the way your app behaves, but it can be fixed with some necessary adjustments. And you don’t yet need to use new APIs or change your TargetSDKVersion at this level.

Want To Develop An Android Application?

If you’ve a compatible device (Pixel, Pixel XL, Pixel C, Nexus 5X, Nexus 6P, or Nexus Player), then obtain the Android O system image from the download page and follow the instructions to flash your device.

You can also download the Android O system image for the emulator from the SDK manager under Android O preview.

After updating to latest Android version, review the system behavior changes and try to identify some areas where your Android app might get affected.

Install your Android app on the device and run various features as well as functionality tests. Go through all of your app flows to find bugs or behavior changes in Android O.

Note down the behavior changes and make the required code changes wherever needed to support Android O. Then, recompile your Android app with the same API level.

Once you’ve identified and fixed all behavior changes issues, upload and publish your updated APK.

Now, whether you’re developing a brand new app from scratch or want to create an Android app compatible with Android O, we recommend updating your Android Studio to the latest version, which is now available in the canary channel.

Furthermore, if you have no plans for using Android O features, you can also develop for Android O using Android Studio 2.3.3 from the stable channel. However, keep in mind that the tools for working with adaptive icons and downloadable fonts as well as XML fonts aren’t available in 2.3.3 version.