The Rise of iOS and Swift – Will It Rule the Enterprise App Development?

Have you heard the news that Apple is taking 94% of the profits of the entire smartphone industry?
According to IDC research, Android dominated 82.8% market share worldwide in the smartphone market. Possibly, the answer lies in enterprise adoption.

For example:
At Salesforce, a Mobile SDK is provided for both iOS and Android. However, the usage of custom application also tracked that make API calls through mobile SDKs. Considering Mobile SDK stats, we see 87.63% of all transactions are through iOS, with 12.11% through Android and remaining 0.26% through other platforms like Windows, OSX, and other platforms.

With this, we come to know that mobile application developers are looking to be successful in the enterprise and have to focus on app development for iOS. Additionally, Swift, Apple’s new programming language is rapidly gaining praises for app dev. Lyft mobile application is rewritten in Swift with more than 2/3 less code.

Lyft’s old code was fine. But its new version is tighter, easier to maintain and ready for the future. – Chris Lambert, CTO, Lyft

Are you interested in developing apps for iOS platform? Still using Objective-C for that, then you should switch to Swift, as soon as possible.

If you are not developing for Apple’s platforms that has OS X, iOS, tvOS, watchOS, then at present, the practical Swift applications are limited to few things like proof-of-concept implementations in non-Apple platforms. But now, this thing is changing and no doubt, we will see the expansion of the Swift-affected world.

What makes Swift interesting is it’s an extremely modern language that has well-considered features and design elements. Swift has an elegant strong safety, and is extremely fast, owing to its heritage derived from the LLVM compiler project. Moreover, it has many interesting features for developers, i.e. error-handling system, optional, and Swift’s adherence to protocol-oriented architecture.

Every single factor of the Swift language comes from this philosophy of protocols that defines the behavior of objects, instead of their inheritance trees. These features and more, are answerable for Swift to achieve its designers’ goals of being “fast, modern, safe, and interactive”.

Swift works excellent at desktop and mobile application development – developers can build software quickly by using an interactive REPL and also get excellent performance from the resulting code.

Objective-C is having been around for around 30 years, however, Apple didn’t eloquent a precise reason for introducing the new language. The most likely reason is Apple can add or change any functions that it wants, and whenever it wants.

Swift is future and delivers direct ways to the development community to influence a language that will be used for developing enterprise applications and apps that support Apple Watch. Additionally, the main advantage of Swift is it will make porting iOS apps to Android easier. You will not able to utilize existing and relatively mature tools that port Objective-C to Java.

App Store has paid out over $30 billion to app developers
Apple’s authority in mobile app development is an irony. iTunes hold a record for app downloads, more than 100 million and right now, averaging 850 downloads per second, according to the TechCrunch.

Moreover, 83% of iOS users have the latest version contrasted with only 12% of Android users. Such thing describes the most homogenous market for app developers, who want to display satisfying user experience. Fortune 500 companies haven’t unnoticed this. Around 98% of them have developed one or more iOS application since iOS8 was released. However, it is compulsory for enterprise developers to concentrate on the latest SWIFT version.

Tim Cook described the new SWIFT as being, “the next big programming language… [for] the next 20 years.”
Additionally, Swift is an open source, don’t forget.

Tim Cook stated that “Swift became available in September as part of the Xcode tools and in the first month those tools were downloaded over 11 million times.”

According to the report by RedMonk, Swift has had unprecedented growth and is quickly climbing in the list of the most adaptable and popular programming languages.
“We’ve seen many of our developers choosing Swift as they build significant new projects and we are seeing fantastic work with Swift going on in education. Very recently, Stanford University released their Developing iOS 8 Apps with Swift course, which was posted to iTunes University, making this amazing resource available to everyone in the world”, stated Cook. 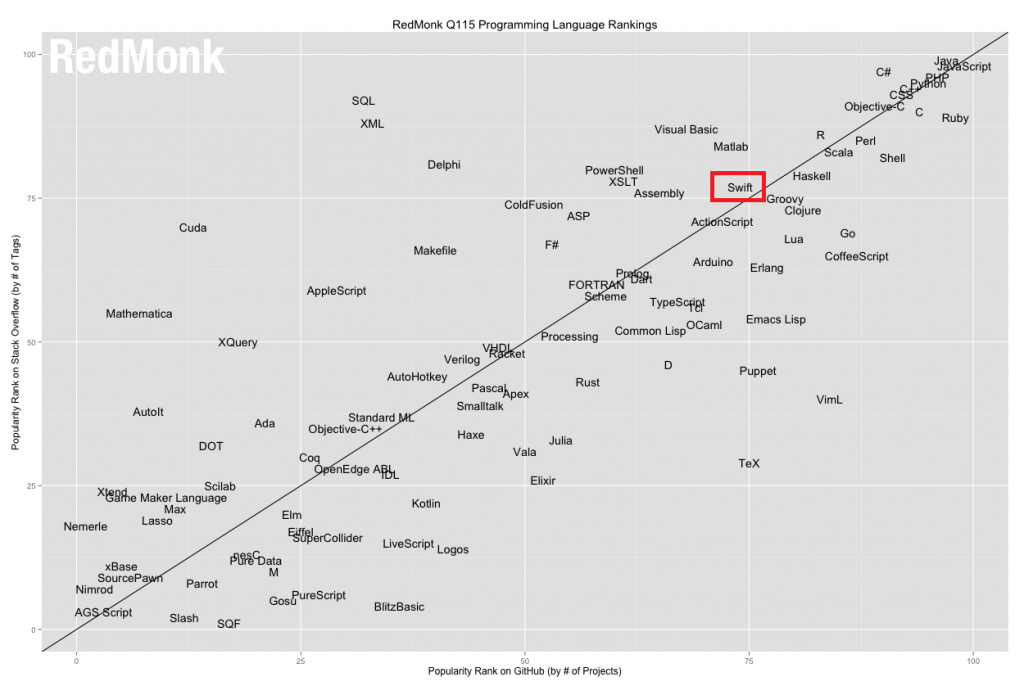 Apple’s Swift has been “essentially unprecedented,” according to the report by RedMonk. Within five months, Swift has entered to the top 25 popular programming languages, comparing Google’s Go language took five years to attain this position.

Swift had been into developer’s mind and now they can’t code without using it. Want to get started with Swift?

It’s time to realize the advantage of Swift programming language and hire swift developers to develop apps for Apple Watch, Mac, iPad, iPhone, etc. If you are looking for more information about how swift will help you in your iOS app development project, then let our expert contact you.