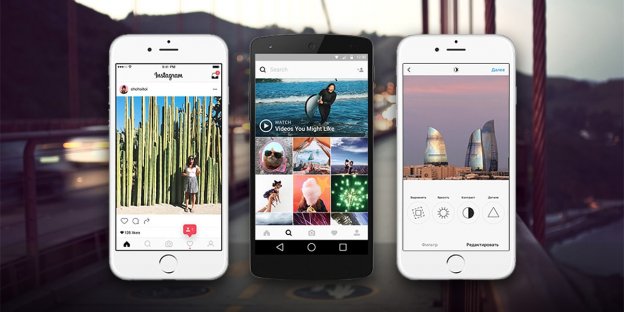 If we are talking about the Instagram statistics, then it says that 700 Million people use Instagram. In addition, according to the Crunchbase, “The total funding amount of Instagram is US $57.5M.” Furthermore, according to the latest report from TechCrunch, “Instagram has introduced a video tagging feature, which allows its users to tag their friends on the video posts.” This feature will work similarly to tagging photos on Instagram.

Furthermore, there is the latest report from The Verge, “Instagram has rolled out a new feature, named as Nametag feature, which makes easier for Instagram users to follow people they meet in real life.” This feature can be customized with additional designs, colors, and stickers.

When you see this huge number, you probably think “No thanks, I’m not going to even try to create a photo sharing app like Instagram, because everybody already loves and uses Instagram”.

While it’s true that people love Instagram, but at the same time people always like new things. So, don’t be afraid of developing an Instagram Clone, because just like Instagram, the best photo app for Android will also find their users eventually.

Both are instant messaging apps with similar features and functionalities, but the main point is: both are popular.

While Viber and WhatsApp is developed for the same purpose – to provide an instant messaging solution, but Viber has some features that WhatsApp doesn’t and vice-versa.

For example, with Viber you can share your screen with another user during a chat. And in WhatsApp, you can send documents upto 100 MB.

Now we all know that Viber was developed as a competitive alternative to other services available such as WhatsApp, WeChat, and Skype. In fact, when it was started, there was a serious competition going on.

But according to Talmon Marco, Founder of Viber, the competition only helped them. He said that “I think competition drives innovation. We wouldn’t be able to innovate if it weren’t for competition.”

Similarly, all you need to do is to innovate.

And while you’re doing that, there are certainly important considerations that you need to keep in mind before you start developing your photo sharing app.

Important Considerations Before Getting Started!

When we talk about mobile app development, the first thought that comes in our minds is – the cost.

When it’s the matter about cost, most people think of it as an expense which is wrong. The cost is not an expense, but an investment to earn more money out of it. And don’t worry, we’ll give you some tips on how to start getting a ROI as you read on.

For now, let’s talk about the cost first. The cost to build a photo sharing app like Instagram isn’t cheap, but it doesn’t have to be overly expensive either. Here are some things to know:

Now if you’re trying to cut down your initial cost by developing for only one platform (Android or iOS), then it’s a big mistake.

How would you know that your target audience is only on iOS? Or Android for that matter?

To increase your chances of success, you’ll have to invest for both platforms. It’s a risk you have to take.

Because after all, Entrepreneurship is all about taking risks, right?

Therefore, it is wise to create photo sharing app like Instagram for both Android and iOS platform.

And once you get your budget squared away, you need to consider the must-have features of your photo sharing app.

2 – Features Every Photo Sharing App Must Have

A photo sharing app needs a certain number of features to hold itself up in the competition. Some might say that it’s not necessary to include filters or social pushes, but the fact is, your photo sharing app wouldn’t be successful without such features.

So, here are the must-have features for every photo sharing app:

However, this shouldn’t concern you or stop you from developing a photo sharing app. After all, there are 2.08 billion smartphone users out there who are always trying out new things. So, there is a plenty of room left for your photo sharing app to gain a following.

Although, if they don’t get a good user experience out of your app, then you need to start worrying.

Instagram might have plenty of features and functionalities covered, but there is always white space for new photo sharing app ideas on the market. These spaces could easily be filled with some new functions or features that your application will provide.

For example, for family and memorable events to be captured, or for people who have same professions or hobbies.

Point is, you need to dig deeper into the waters of market analysis and go an extra mile to make your photo sharing app successful.

You want to make a photo sharing app like Instagram, but you shouldn’t make just another Instagram clone. Reason is, 700 million people already have Instagram and your app idea should have something new to bring in the market.

So, once you’ve got the basic features built, it’s time to think of your spin.

For example, ask yourself these questions:

Will this be a private photo sharing app like Snapchat?

Or do you want to create photo sharing app for sharing across multiple available platforms?

Will my app support GIF images?

Once you find and develop your own unique spin, you’re ready to enter the market.

Remember that the most important thing in order to succeed is Originality.

So once you’ve developed your unique spin or unique features, you need to market those features to increase your user base, engagement, and retention. And if you keep those things on track, you might also gain an insane amount of following as Viber did.

Monetization isn’t hard if you play your cards right. Take Viber for example. When it was launched, Viber was totally free (and still is), nobody pays anything to use it. And the founders didn’t wanted to change this. So, they came up with different ways of monetizing it. They developed some paid services such as Viber Out and Sticker Store, and Viber started generating profits.

Same way, you could also opt for this option if you do not want to show advertisements or offer in-app purchases. So with your amazing idea and quality developers, it’s possible that your app also achieves success as Viber did.

In case, if you still have any query or confusion on developing mobile apps like Instagram, then you can get in touch with us through the below-given form and one of our sales representatives will revert to you within 48 hours. The consultation is absolutely free of cost.