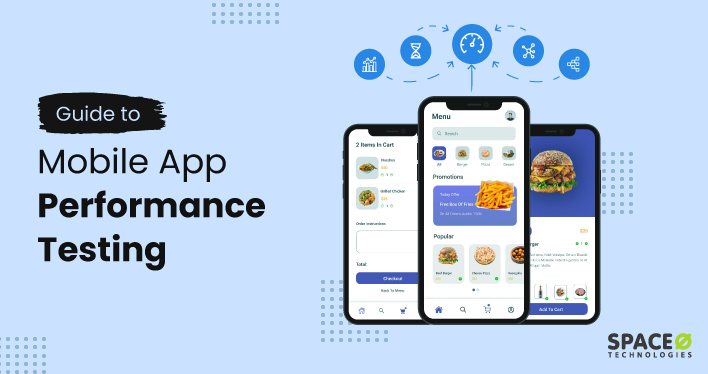 If you are a QA (Quality Analyst), you would surely want to know how an app performs before it goes live. But you may be worried that the app would not be able to

Surely you don’t want users to encounter poor usability. In fact, Statista reported mobile users in the USA spent 4 hours and 9 minutes using mobile apps daily. Users are not ready to compromise on the performance of mobile apps.

So, to ensure that the app is performing seamlessly and meeting your set KPIs, you need to conduct mobile app performance testing. Since 2010, we have been a leading mobile app development services provider. We have come up with this guide that will help you strategize the testing process for your app.

From this blog, you will learn:

What is Mobile App Performance Testing?

To put it simply, mobile app performance testing means testing the mobile app’s performance in order to identify issues and challenges after comparing it to the standard KPIs.

Mobile app testing is also executed in a simulated environment to predict the experience of an app user just after the launch of the application. Also, this will help you to ensure that the app normally performs on a range of devices even if there is a peak in traffic loads and internet connectivity is poor.

Also, know that the mobile app’s performance is measured in three different categories.

Take a look at the below table to have a better understanding.

There is a range of app performance testing types that, generally, the QA team performs to ensure the app is running seamlessly on multiple platforms as well as devices.

But why are performing these tests essential? If you are still looking for an answer, then check the next section.

Suppose you miss testing your application before launching it on the app stores. In that case, you are probably ignoring various bugs and defects and increasing the chances of your app getting rejected by the Apple App Store or Google Play Store. Apart from this, there are many reasons you need to conduct mobile performance testing.

Let’s check what these testing types are in the next section.

Which are the Different Types of Performance Testing?

Want to Develop an App That Performs Seamlessly on Various Devices?

Contact us with your mobile app development requirements. We will help you build and perform app testing to identify and mitigate all bugs at the seedling stage, making your app flawless.

Moving ahead, we are going to discuss the mobile app development tools which are required to perform app testing. Have a look at the list of server-side and client-side each.

Which Tools are Used for Mobile App Performance Testing

In this section, we are going to discuss the tools separately for the server side and client side. Also, we will talk about these tools along with the platform information and pricing details. Let’s get started.

After discussing all the mobile app performance testing tools, let’s discover how you can use a strategy to make the most of the testing process.

If you are unaware of how to proceed with the testing process, then look at this section, where we have come up with a strategy. This step-by-step testing strategy is specially designed for newly funded startups to help them successfully execute performance testing.

Step 1. Set your objectives for each case that aligns with the business requirements. This is the stage where you will know the mobile app architecture of the project, including functionalities, data, and UX.

Step 2. Ensure you have set your priorities for each scenario and test each mobile app feature one by one.

Step 3. At this step, you need to set the key performance testing metrics & mobile app KPIs in order to check whether the execution was successful or not. Here are the KPIs to consider.

Step 4. To check the look and feel of the interface and understand the user experience of the app, simulate a real-life testing environment.

Step 5. Depending on the mobile app development methodology you are using, align your testing approach to embrace regular bug reports and regression tests, also to improve communication, and speed up the testing process.

Step 6. While testing the app, you need to focus on the latency and the bandwidth of a carrier network in order to optimize the app and improve the overall user experience.

Step 7. At the end of the testing process, focus on resolving issues and retesting the app to ensure a bug-free app.

We have discussed the strategy. Now, if you want to test the app and see what you can check in the app to measure the performance, below is a quick checklist for you.

Talk to us. We have an experienced team of quality analysts who are well-versed in optimizing Android, iOS, and hybrid mobile apps.

Performance testing is mainly associated with measuring the performance of an application under certain conditions and loads.

How much time does it take to do mobile app performance testing?

Testing has always been a crucial stage of the mobile app development process. It takes 4 – 6 weeks to test a mobile application. While testing, it is essential that you consider several factors like:

Is it possible to automate performance testing?

Start Testing Your App to Get Performance