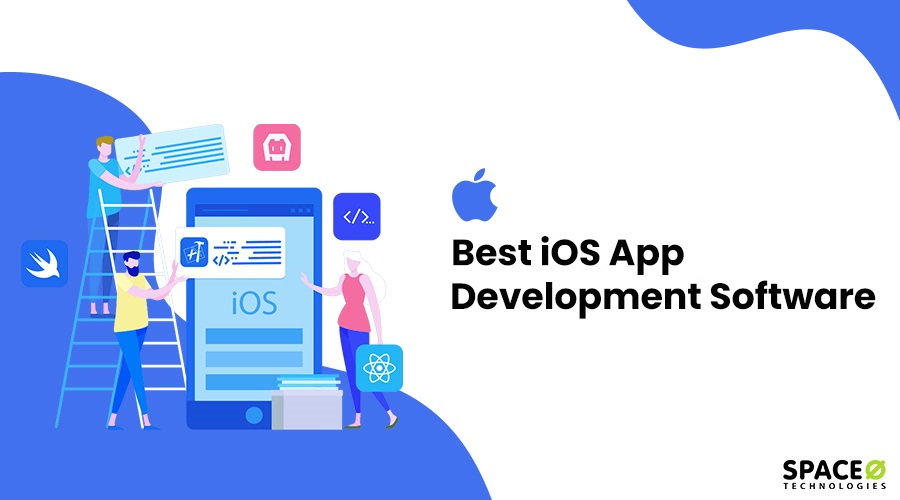 Based on this fact, we can determine that developing an iOS app has the potential to target the right audience and generate better ROI for your business.

But, do you know by using which tools you can accomplish that?

Year by year, the app development industry sets new revenue generation records, be it Apple, Google, or mobile app developers. Hence, the revenue is growing steadily each year. In fact, the App Store spending reached $72.3 billion, according to Sensortower. 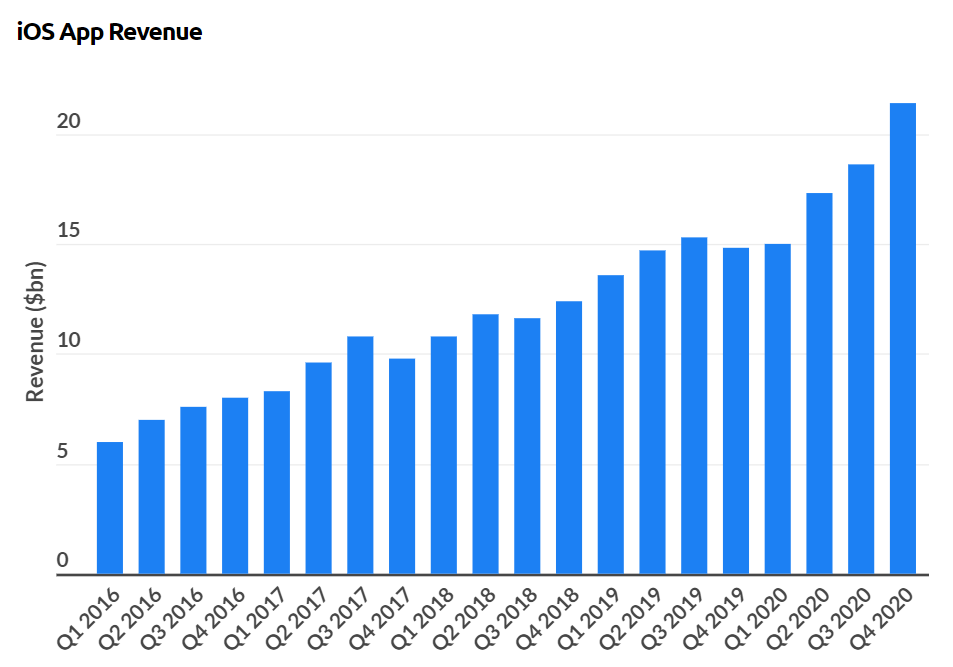 The iOS app store has surpassed Google Play Store in revenue. That is the core reason behind the iPhone’s popularity. Businesses have started to develop iOS apps to use as advertising tools. Whether you are an entrepreneur or student choosing the right app development tool determines your app success.

With the help of our experienced iOS developers, we have listed down the 6 best iOS development tools for you to check. We have divided the information based on ratings, price, and features.

Xcode is a reliable and fast iOS app development software to start with. It is Apple’s integrated development environment for iOS apps and Mac. You can use Xcode as a graphical tool to develop iOS apps. 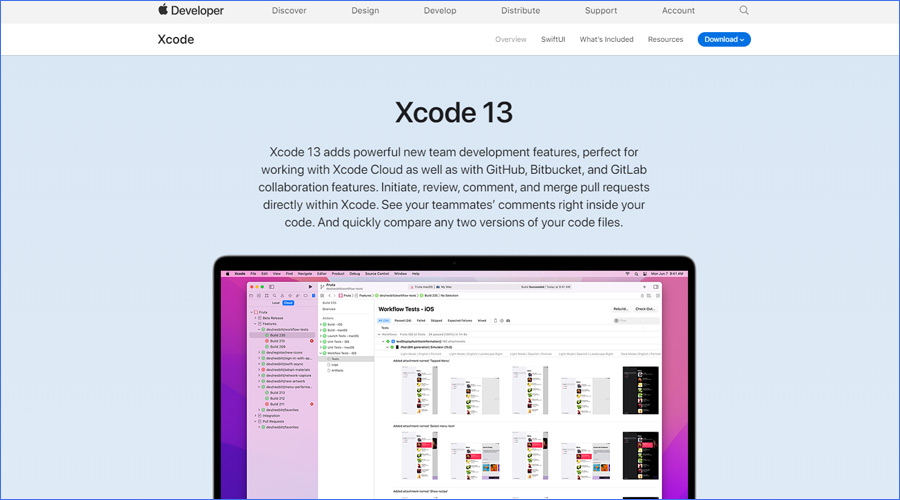 Xcode will help you to build great apps for iPhone, iPad, Apple Watch, and Mac. This tool combines frameworks, compilers, tools, and iOS SDK to design, develop and write code and debug the iOS apps.

Using Xcode, you can manage development workflow, including creating applications, testing, optimizing, deploying, and publishing to the App Store.

If you are developing a native mobile app for iOS, Apple suggests using the Swift programming language.

The Xcode is packed with multiple interface integration from editing code, user interface, design, management of assets, testing, and debugging in a one workspace window.

The interface is customizable, so you can manage the windows by accessing multiple windows and tabs at the same time.

Be it C, C++, or Swift, if the Xcode checks through the code and whenever it notices a mistake, the source code error will be highlighted. The Xcode will help you to fix the errors.

The intelligent code completion helps to speed up your typing. Now, it is easier than ever to write code efficiently with Xcode.

UI builder will help you create OS X, watchOS, and iOS apps by assembling menus, controls, videos, and other elements from configurable objects and those which are created by you.

By using StoryBoard, you will be able to specify your app flow and scene transitions. Then, connect objects and changes to the implementation code graphically.

After launching your app in debug mode, the debugging session will start in Xcode. If you are working with iOS or watchOS apps, either Xcode launches in Simulator or on Mac. In the case of an OS X app, it will be launched on your Mac.

AppCode is a powerful app builder packed with multiple useful shortcuts and actions to make your mobile app development process easier. It is an IDE for Swift, Objective C, C, and C++. AppCode’s development is built on JetBrains’ IntelliJ IDEA platform. 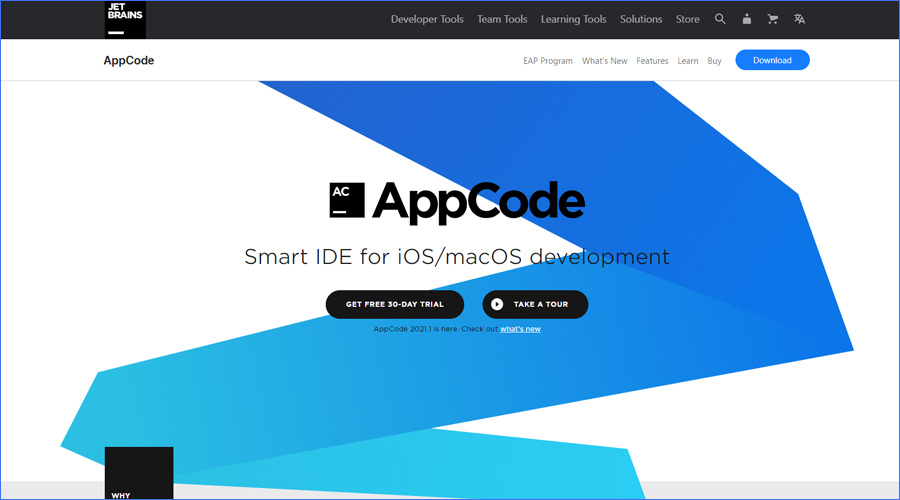 It supports technologies like CSS, HTML, and XML. In addition to that, AppCode provides essential integrations, including built-in reveal reports and CocoaPods manager.

AppCode has the ability to handle enterprise apps development easily. To gain additional knowledge, refer to the AppCode Blogs, this will help you to know more about AppCode.

It will let you code fast with an IDE that analyzes your context and understands the project you are working on. Code completion and formatting are some of the main benefits.

B) Navigation and Search

You are free to navigate to any symbol, function, or class in your code and find the applicable usages while searching. You will get a search bar on the header to search about IDE settings using navigation and search options.

It is amazing how you can easily select predefined user interface themes and customize them according to your requirements. You can create one of the keymaps or use the default one as well.

Using CodeRunner, you are free to code in any language. Its lightweight IDE type will make the web app development process easier by allowing 25+ languages. The pricing plans of CodeRunner start from $14.99. 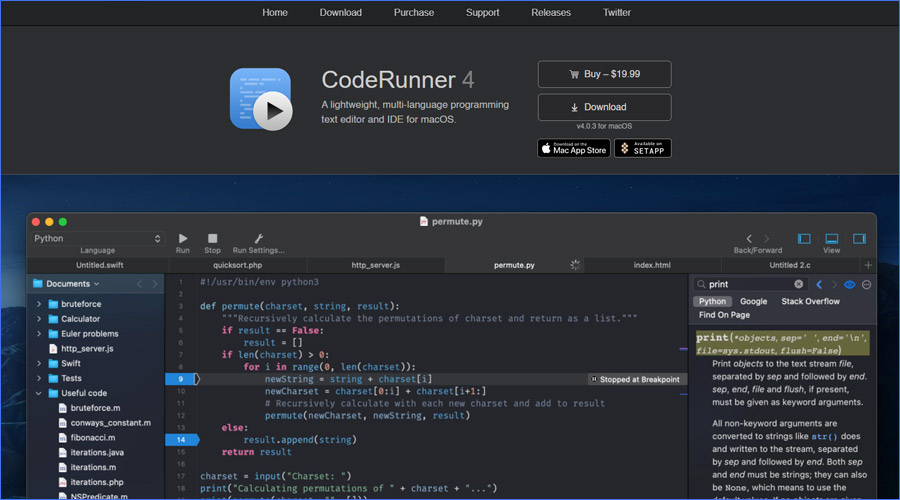 CodeRunner comes with debugger support and syntax highlighting for Swift. In comparison to Xcode, it will be easier for you to operate CodeRunner 4.

CodeRunner supports over 25 languages; if you plan to run additional languages that don’t align with CodeRunner, you can simply enter it in their terminal command.

CodeRunner will intelligently help you to complete your code among hundreds of fuzzy search algorithms. The documentation snippets and ranking results will allow you to code effectively.

There was a time when you had to write the code first then compile it to check the errors. As you will write the code in the text editor, CodeRunner will check common issues, syntax errors and display the error within your text editor.

Flutter is Google’s UI toolkit for developing natively compiled applications for desktop, mobile, and web just from the single codebase. Flutter is undoubtedly great for iOS. Additionally, using Flutter, you can develop web apps in Windows, macOS, Linux, and ChromeOS. 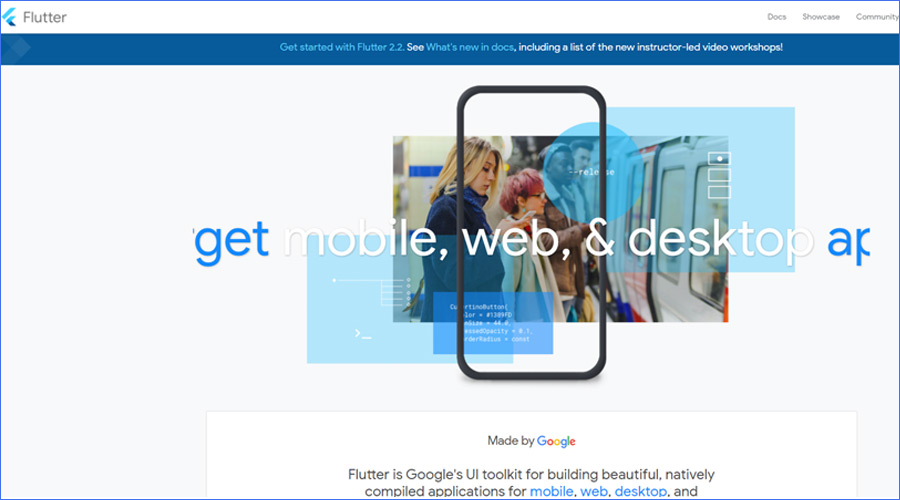 Similar to SwiftUI, using Flutter, you can easily make UI-related changes. If you have an iPhone application and are now planning to develop an Android version of the app. Then there is no better alternative than Flutter.

A) Single UI and Business Logic in All Platforms

Many cross-platform frameworks provide a way to share codebases between the target platforms. But the application framework like Flutter allows you to share UI code and UI itself. Most of the UI rendering happens like this: 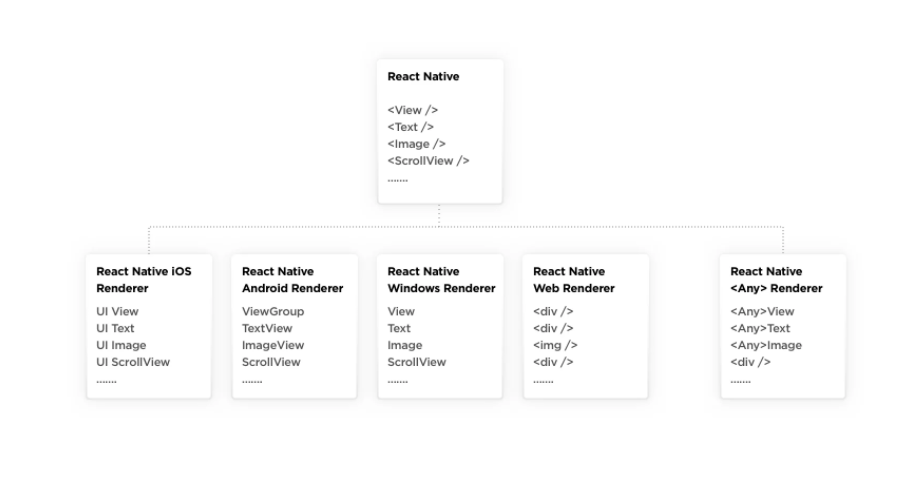 Now, if you rely on platform-specific components for rendering, it increases a requirement for every single layer for the framework widget data and platform widget sync. It gets much more complicated, doesn’t it?

Flutter directly shows application UI to the canvas it will draw into; hence its rendering will stand out, eliminating the tension of UI consistency in different platforms.

Hence, its “Hot Reload” feature helps to save tons of app development time and cost altogether.

Buildfire is the most powerful iPhone app developer software. This app development platform allows you to build iOS and Android apps with its drag and drop feature. 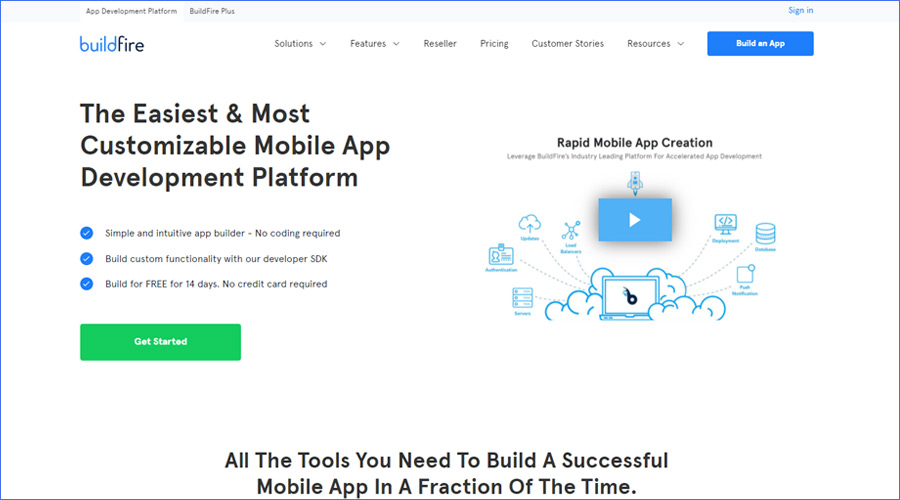 To test out the service, you can sign up for the 14 days trial and then upgrade to a paid subscription.

You can edit the app in real-time using an interactive emulator and feel like a pro. The plugin will help you to add powerful functionality to your app right away.

With BuildFire SDK, it will be easy for you to add custom features, allowing you to develop robust functionality in a serverless structure.

If you are planning to build an application for multiple purposes like payment or video apps then AppyPie is for you. This site offers multiple features for businesses to develop great apps without having the need for a software engineer and a large team. 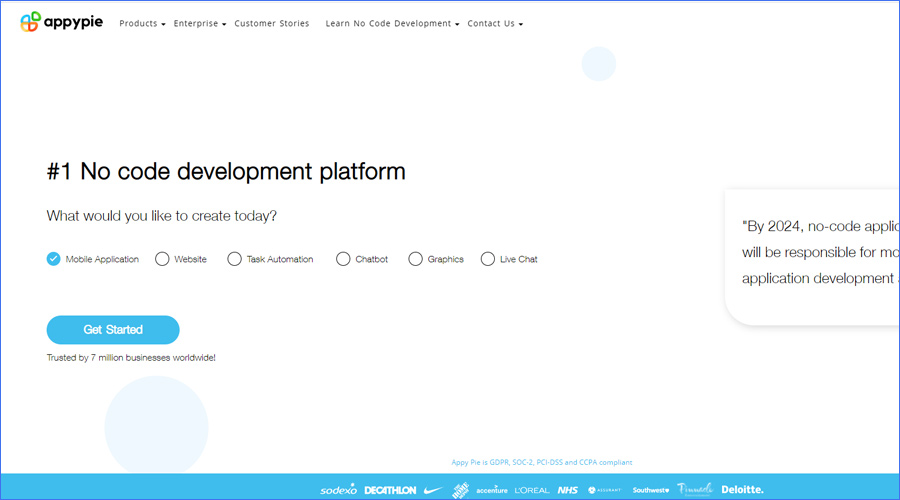 Experience seamless app development with AppyPie’s faster app builder. The interesting thing about the app builder is they offer content to users in offline mode as well. Using this app builder, you can customize your app and improve user engagement swiftly.

B) Team to Help You Publish Your App

If you are planning to submit your app to Google Play Store or App Store? Appy Pie’s app builder helps you to make that process easier. AppyPie’s team of skilled individuals will ensure that the entire process goes seamlessly.

Still, have some questions related to this iOS software? Let us answer some of the frequently answered questions.

FAQs About Software for App Development

Which is the best iPhone app development software that is free?

Note: Some of these tools offer a free trial initially, then allow you to convert to a paid subscription.

Which is the best free iPhone app development software for Windows?

In this guide, you have learned about the best software for iOS app development. The Xcode will be an ideal choice to start native iOS app development. Flutter tool is an excellent option if you plan to develop apps in a single codebase for multiple platforms. If you don’t want to get into coding much, BuildFire software will help you to develop customizable mobile apps in less time and cost.

Now, if you face any difficulty in developing your first iOS app, get in touch with us, and our technical team will guide you further. Since our iOS app developers have created 2500+ iOS apps successfully, our team is capable of turning any app idea into a smoothly running application. Some of our top applications have been mentioned below.