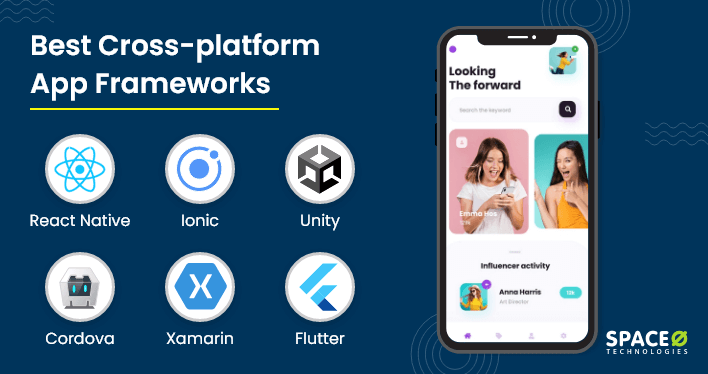 Do you want to reach a wider audience to enhance your business?

Cross-platform app development is the best solution that allows businesses to develop apps faster instead of developing apps for only one platform.

What is a Cross-platform App Framework?

Cross-platform mobile apps have the ability to run on various mobile platforms, such as iOS, Android, and Windows. Therefore, using a cross platform app development framework you do not require separate coding to build an app for each different platform. Also, you should know the complete difference between Native vs Cross Platform app development as well. Choosing the right app development type directly affects your cost as well.

Also, as the cross-platform is compatible with multiple platforms, it is easy to reach a broader audience.

With all the benefits, it is one of the most popular app development methods for startups and enterprises who are looking to resolve mobile application development challenges efficiently.

Let’s dive in to discover the best cross-platform app frameworks that are used extensively by app developers.

A report by Statista suggests that these are the top cross-platform frameworks that are used by developers worldwide.

So before we move ahead to discuss these frameworks, let’s have a quick comparison of all these cross-platform app development frameworks.

Want to Build a Cross-platform App?

Space-O is a leading cross-platform mobile app development company that has experience designing and developing more than 4400 mobile apps for leading startups and enterprises.

Now, let’s discuss all these frameworks in detail.

Talk to our app development consultants, who will discuss your app idea and help you optimize it according to your requirements.

What are the Advantages of Cross-platform App Development Frameworks?

In this section, we are going to discuss the pros of cross-platform apps in detail, so you know how cross-platform mobile apps help your enterprise business grow.

After learning almost everything about cross-platform mobile app development, if you want to know where to find developers or what to look for before hiring a company, check the below FAQs.

Which factors to check before hiring a cross-platform app development company?

Here are a few factors to check if you are hiring a reliable app development agency to build a cross-platform app. Apart from the above factors, you can also look for the following points.

What are examples of cross-platform apps?

Build Your Own Cross-platform App

Through this guide, you learned about cross-platform app frameworks and libraries. If you want to build and launch your app quickly in the market, leverage the benefits of hybrid mobile app development. In case you face any challenges while validating your app idea or building a cross-platform app, get in touch with our experienced mobile app developers. We have experience working with more than 4400 clients across the globe to deliver top apps like Glovo, which has received a total funding amount of $1.2B within a few years.

Get in touch with us through the Contact Us page, and we will get back to you within 24 hours.