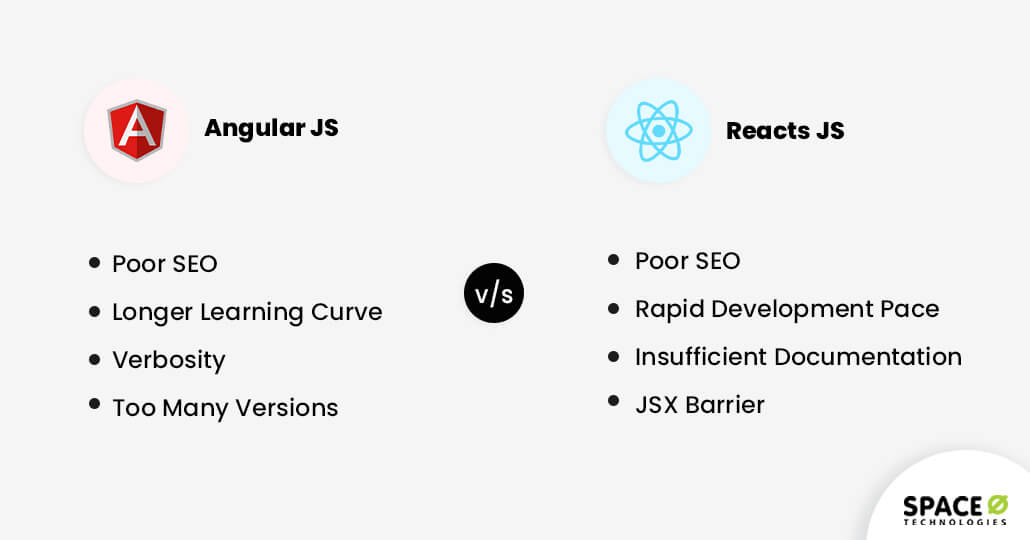 Which came first, the chicken or the egg? To be or not to be? Are zebras black or white? Angular or ReactJS? True. Choosing an ideal Javascript framework is nothing less than an uphill battle. However, with this comprehensive post on Angular vs React, we will help you choose a framework that’s right for your needs. Let’s dive deeper.

If you know the complete web application architecture, you will find ReactJS and AngularJS don’t share much in common, they both can help you build robust and reliable web applications. Choosing one from the two is certainly a tough choice. However, with this post, we aim to clear all your doubts regarding both frameworks. By the end of this post, you will know the answer to this question: Angular vs React, what’s the difference?

Before we dive deeper into the nitty-gritty details and compare Angular and React, let’s first understand a few basics about both frameworks. 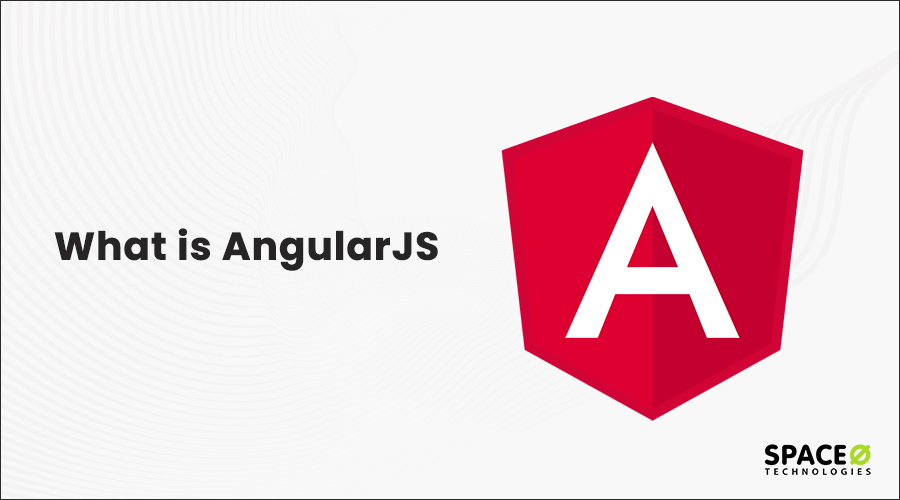 Developed by Google, AngularJS is an open-source, client-side JavaScript Model-View-Controller framework that can help you build dynamic web applications. It is entirely based on HTML and JavaScript. The Angular framework was first introduced in 2010 and was later rewritten as Angular (version 2 and above) in October 2016. The latest major release is Angular 10 (released on June 24, 2020).

AngularJS is used extensively in web and mobile for front-end development. Here are a few of the most popular AngularJS use cases:

1.) Progressive Web Apps (PWAs)
Google itself introduced PWAs in 2015. Progressive Web Applications are websites that look and feel like an app. It’s a perfect blend of native and web apps. Today, PWAs are majorly built using the Angular framework. In fact, Angular 5 introduced inbuilt support for PWAs to ease out the mobile development.

3.) Enterprise Web Apps
Because Angular JavaScript contains typescript, you will be able to benefit from all the features needed to develop enterprise web apps. A few such features are advanced refactoring, navigation, and autocompletion. They will make mobile development effortless.

So, these are some of the use cases of AngularJS. Also, if you want to read the complete comparison of a website and web apps, we have also written a blog on it.

Now, we will move ahead and have a look at what is React JS and its use cases. 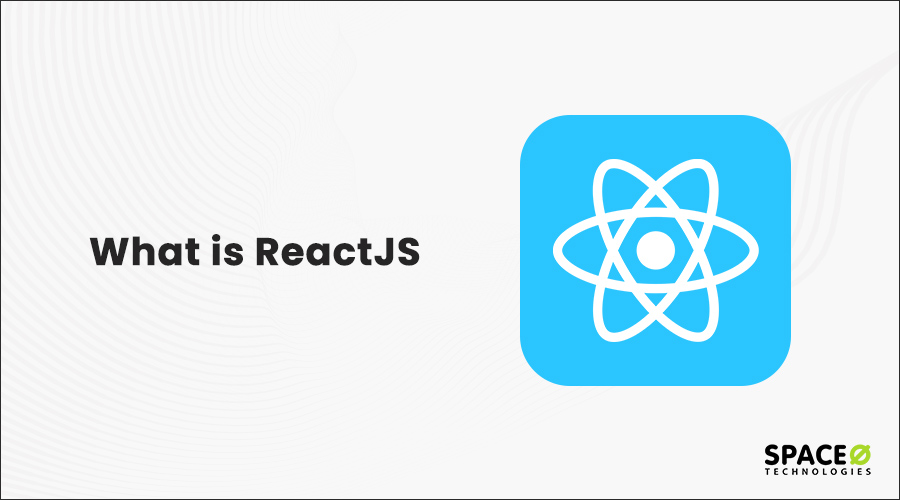 Developed by Facebook, ReactJS is a front-end JavaScript library majorly used for building interactive user interfaces. It was first released in May 2013 and has been around ever since. The framework makes the code easier to understand and launch. Today, it is used for various front-end development purposes. Let’s look at a few popular ones.

ReactJS has many use-cases. It’s flexibility and ease of use are two main reasons that are responsible for its rapid adoption. Here are a few popular ReactJS use-cases:

1.) Social Networks
One of the most common use cases of ReactJS would be in creating social networking sites and apps. It has all the essential features required for building dynamic web and mobile applications. No wonder why Facebook is relying so heavily on this framework.

2.) Ecommerce or Retail
You can add ReactJS as a UI library in any eCommerce web app. That’s because the framework allows you to build reusable components. Furthermore, every individual component of your web app will be independent of each other. And hence, any individual part of your app fails, you can still make it work as other features may still be operating.

Want to Create a Web Application?

While both frameworks can be used in developing an application, they have their own distinctions. Let’s compare them to understand what sets them apart.

Comparison of Angular vs React

ReactJS and Angular are different in many ways. For instance, Angular is a front-end JavaScript framework, whereas ReactJS is a JavaScript library. Both of these frameworks are great choices for front-end development. Here we’ve highlighted a few important differences between them. 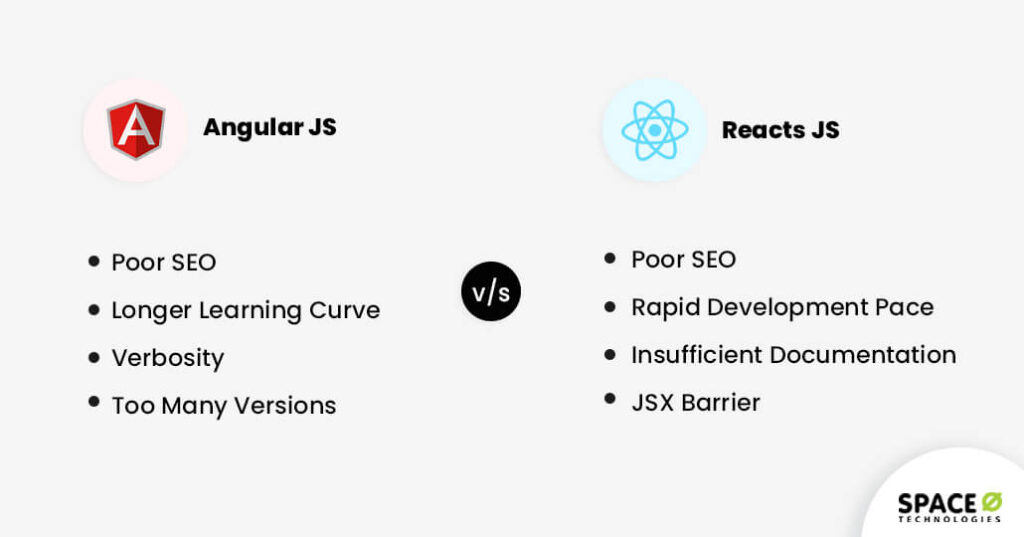 However, in such cases, you can rely on the community to get your query resolved.

React vs Angular Pros and Cons

Like all the top front end frameworks, React and Angular both come with their own advantages and disadvantages when it comes to choosing the right front end development framework. Let’s quickly look over a few pros and cons of both frameworks. 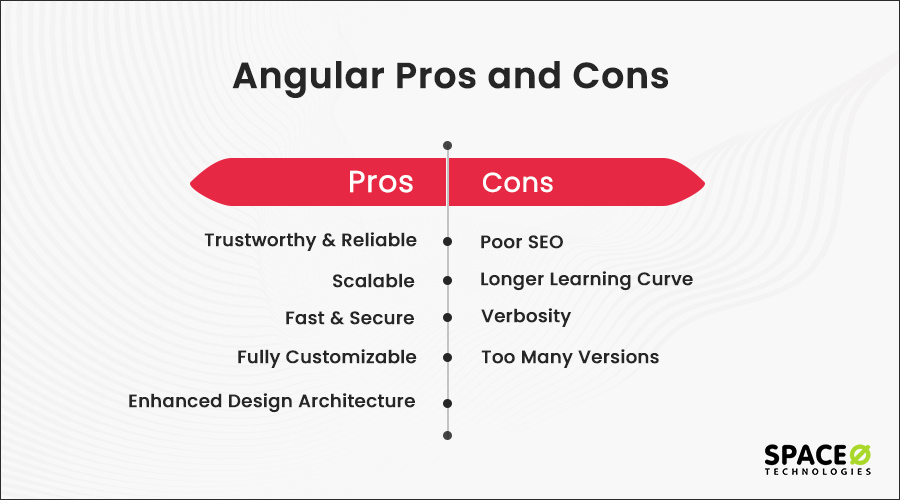 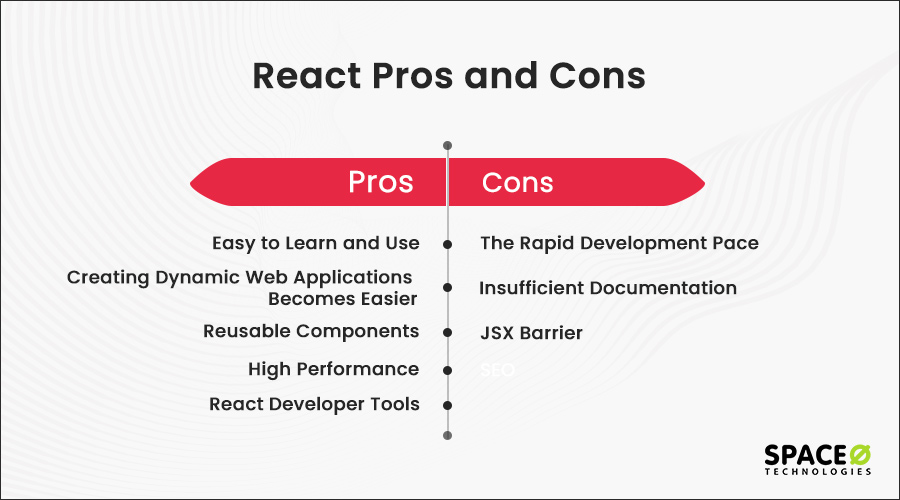 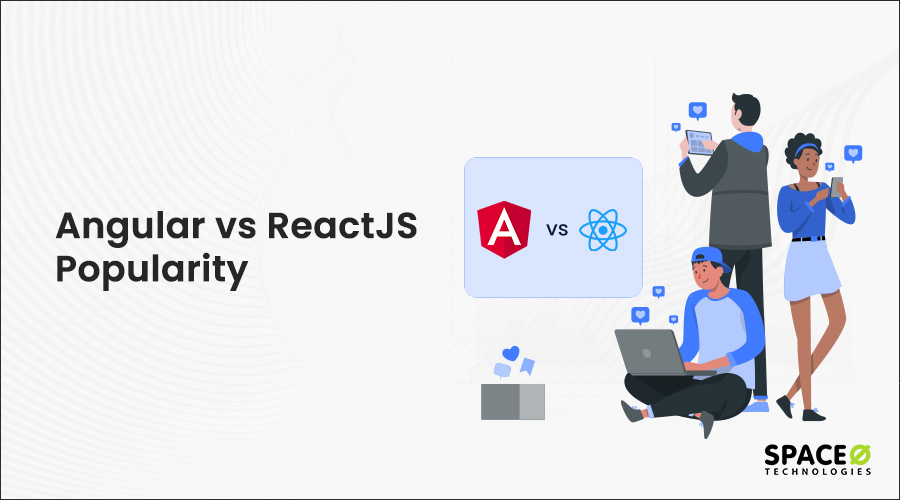 Neither Angular or React are behind when it comes to popularity. Over the years, they both have gotten popular among various developer communities and online forums. By numbers, Angular and React stand at 66.9k and 158k stars on GitHub, respectively.

That’s not all. Both communities are very active on various technical platforms. For instance, 235246 questions have been asked on the ‘angular’ tag on Stack Overflow until now. On the other end, the ‘reactjs’ tag has received over 254356 questions so far on the same platform.

If we consider Google trends, React has received more searches than Angular. The reusable modules and shallow learning curve could be two main reasons responsible behind it. However, both the modules are equally usable and have their own use-cases.

The market share of ReactJS is significantly more than Angular. If we go by numbers, 1,041,619 websites are powered by ReactJS, and about 382,009 run on Angular. Here’s a table comparing both the frameworks:

How to Choose Between Angular and React?

Agreed. It’s a tough choice. Because both the frameworks can be used for creating similar web applications, picking one needs you to carefully access your requirements. For instance, if you’re seeking to build a minimum viable product with limited functions, you can go with the Angular framework. That’s because the framework offers all the necessary components of the MVC stack to enable developers to build a fully working SPA.

On the flip side, if you’re seeking to create a large-scale single-page application with several functions, React app developers perform all the action. That’s because it will allow you to reuse your components throughout your application. Thus, it will cut the turnaround time significantly while eliminating complexity from the development process.

Angular vs. React – Which is Better?

While both the web frameworks are best for what they’re developed for, they both have their own advantages and disadvantages. Having said that, we believe React is slightly better than Angular.
There are many popular frameworks available. But, React a more powerful framework than Angular. Also, it has been evolving consistently for the past few years. Its virtual DOM implementation, server-side rendering optimizations, and enormous support from the developer community make it stand out.

That’s not all. In case if you plan to create react app, If you wish to migrate from one React version to another, it’s hassle-free too! As such, you don’t have to install updates one by one — like Angular.

Summing that all up leaves us with an obvious choice – React is better than Angular in quite a few ways. This certainly doesn’t mean Angular isn’t worth it. As said earlier, both have their own positives and negatives. What you should be using really depends on your requirements and objectives.

What are higher-order React components?

A higher-order component (HOC) is an advanced technique in React for reusing component logic. HOCs are not part of the React API. They are a pattern that emerges from React’s compositional nature.

As we discussed earlier, Angular has a comparatively longer learning curve, whereas ReactJS can be learned in a short period of time.

What are the most popular use-cases of Angular?

Angular has been used in creating a few of the most popular websites and apps. A few popular use-cases are PayPal, Netflix, Google Cloud, and Udacity.

What are a few popular apps built with ReactJS?

Facebook, Bloomberg, Airbnb, Discord, and Instagram are a few of the most popular apps built with ReactJS.

Which framework is better: Angular or ReactJS?

As such, there’s no one answer to it. In some cases, Angular outperforms ReactJS and vice-versa. It really depends on your requirements and project goals, which one will work best for you. If you’re unable to decide, you may consider consulting an expert.

Still, Confused Between Angular and React For Your Next Project?

Both ReactJS and Angular are mature frameworks for creating interactive web applications. Picking one over another is certainly a tough battle of choice. However, you can win this battle by carefully considering your requirements and objectives.

If you’re still having a hard time deciding one, let our consultants help. We, being a leading mobile app development company, have been working with both technologies for years now. Our consultants will help you make informed decisions about the framework based on your long-term goals.

Simply shoot us an email and we will be happy to get in touch with you as soon as possible. Till then, you can explore our successful app development projects and know us better.