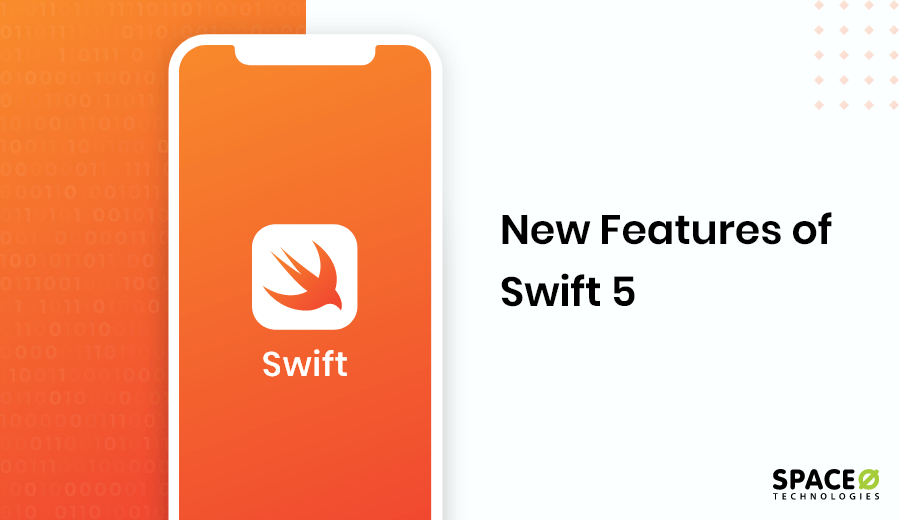 Apple gadgets are one of the most trusted and popular gadgets in the world. These gadgets use really cool iOS apps for functioning. Developing iOS apps with Swift programing language gives an edge to these apps. This is why we will be discussing the new version Swift 5 features in this blog.

We are a leading iOS app development company having an experience of developing 2000+ iOS apps for phones as well as iPads. We are writing this blog to try and help the Swift iOS developer as well as entrepreneurs to tell them about Swift 5 in detail. Herein we have covered 10 new and advanced features of Swift 5 programming language that can be the right choice for your macOS and iOS app development. So, let’s explore 15 language features of Swift 5 with in-detail information and examples.

From this article, you will discover:

A brand new version of the Swift is here. However, if you are wondering about the Swift 4 vs Swift 5 difference, let us make it clear for you. Swift 5 improves Swift 4.2 by adding a slew of new features and stabilising the language’s ABI. This is a significant turning point in the evolution of the language, as there will be fewer changes in the future.

Today, we’ll have a look at some of the major changes and new features in Swift 5. We’ll also discuss how the process of making changes to the Swift language actually works, and why every iOS developer should know about it.

The Swift programming language was initially released in 2014 and was open-sourced at the end of 2015. As a result, more than 600 contributors have joined and are actively improving the language for seamless iOS app development.

After the Objective-C, Swift was originally the ‘second’ language for apps in the Apple ecosystem. But as Swift is open-source, it can be used on a number of other platforms, especially Linux.

This also led to the development of server-side Swift so that it can be used as a back-end language for web services. But why are we discussing all this? It’s important to realize that Swift is bigger than just building iOS apps.

So, without any further ado, let’s come straight to the topic and learn Swift programming features with an updated process.

Swift Evolution is more than just creating a good programming language. It also rejects proposals to ensure the integrity and robustness of the language. If you are interested, check out this SE – 0217, a rejected proposal about the bangbang operator !! Now, let us discuss about what is Swift 5 and what are its features.

Swift 5 is released and it is available in Xcode 10.2. We have discussed Swift 5 features, and how you can effectively use Swift for app development.

Let’s see some of the frequently asked questions.

When was Swift released?

Swift 1.0 was introduced in 2014, Apple’s WWDC. The language underwent an upgrade to version 1.2 during 2014. Later a major upgrade was announced as Swift 2 at WWDC 2015. At first, version 2.2 which was propriety language was made open-source software for Apple’s platforms and Linux on December 3, 2015, under the Apache License 2.0.

There have been many Swift releases and versions after that. Swift 5.0 was released in 2019.

What is the latest Swift version?

As of 2022, Swift 5.7 is the latest Swift version for Swift App Development. Swift 5.7 bring major additions to the language by improving developer experience by bringing improvement to the compiler. Even, though it includes tools in the Swift ecosystem including SourceKit-LSP, Swift Package Manager, and refined Windows support.

How do I migrate to Swift 5?

In order to migrate to Swift 5, you just need to use the Apple Xcode 10.2’s code migrator and many of the changes will be automatically handled by the code migrator itself. Invoke the Migrator manually from the menu Edit -> Convert -> To Current Swift Syntax…You can also use the migration guide available on the official website according to your expected result.

Which are the top apps made with Swift?

The following are the top apps developed with Swift.

What can you do with Swift?

Being a fast and efficient app development language, Swift offers real-time feedback and is easily connected with Objective-C code. Therefore, you can save time by writing safer and more reliable code to develop an intuitive mobile app for your business.

What language are iOS apps written in?

iOS apps are written in 2 main languages which are Objective-C and Swift.

Which are the best Swift components?

Here is the list of Swift components for you to check.

As Swift changes, it brings better Swift latest version features. Swift 5 comes with lightweight syntax and combines powerful type inference and pattern matching. The new version not only allows Swift developers to express complex ideas in a clear and concise manner but also improves the readability of the code during the iOS app development.

So, if you have any idea on iOS application development that you want to develop with Swift 5, share it with us. We are a leading Swift app development company based in India, Canada, and the USA and have experience of developing over 2500 iPhone apps that you can check and explore.

In case, if you have any query or confusion related to Swift programming questions like why select Swift as your programming language, iOS app development with Swift cost, how to hire an iPhone app developer, Swift source code examples, get in touch with us through our contact us form. One of our sales representatives will get back to you shortly. The consultation is free of cost.