If you are a newbie Android developer and a little bit confused between Java and Kotlin, or if you don’t exactly know the differences between Kotlin vs Java for Android development, then this post is for you.

Herein we have compared both the programming languages based on their features and functionalities, so you can have a look at the comparison and decide which language has advanced features for Android development.

Java exists in the market for the past 23 years and most of the Android applications are developed using Java. So you know about Java, Android Studio, and Android API.

What is the Difference Between Kotlin Vs Java?

Here is the comparison table for Android Kotlin and Java performance that you can check to get detailed information about both languages.

After knowing the major differences between Kotlin and Java, you must want to know about the top applications which are developed using Kotlin. Isn’t it? Check the next section.

Tinder, Netflix, Airbnb, Pinterest, and Uber are some of the best android apps developed in the Kotlin programming language. 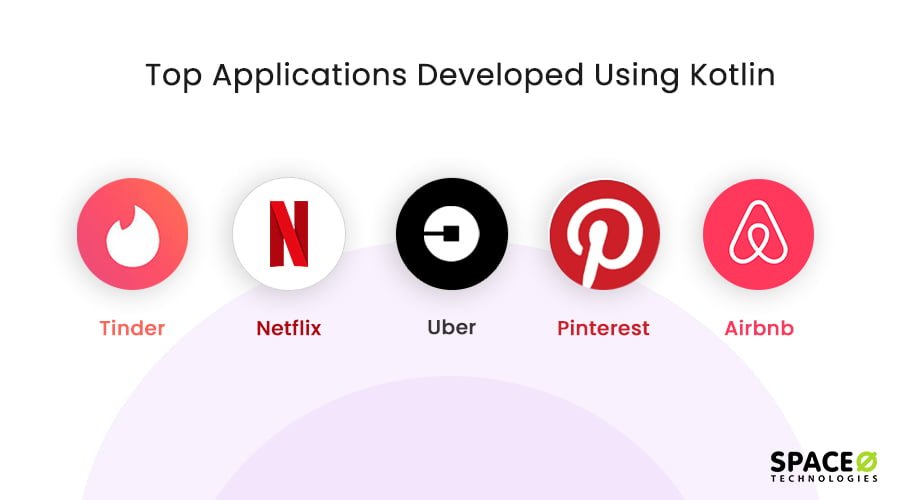 To know how Kotlin has helped these apps, let’s check the use case for each popular Kotlin-based mobile app along with the app category, revenue details, and links to download the apps.

You might think which language is more useful and what are the unique features of Kotlin that are not available in Java, and why choose Kotlin for Android app projects rather than existing Java code. To answer the common questions of Android developers, we decided to compare the features of Android Java vs Kotlin.

So, to understand the benefits of moving from Java to Kotlin, you can go through the following infographic and identify on your own which language is more useful for your next project. To make it easy, we have also prepared an Android Java vs Kotlin infographic to give you a quick look into comparison.

Difference Between Kotlin and Java in Android

We have explained the differences between Kotlin and Java through this infographic image. We have compared both languages based on different features. Let’s check these features and get to know more about both programming languages.

Now you know the difference between Kotlin and Java, based on different features, but which one is a better option? Want to find out? Read the next section.

Kotlin vs Java: Which is Better?

Kotlin is a new programming language and statically typed programming language developed by JetBrains. It is a great fit for developing server-side applications, enabling users to write concise code than Java, allowing app developers to solve the same problems with fewer lines of code.

Looking at the benefits of Kotlin vs Java, developers can easily use Kotlin for anything where Java is used today, including server, client, web apps, and also for developing Android applications. Here are some of the other reasons to switch to Kotlin from Java:

We have also mentioned some of the best advantages of using the Kotlin programming language. Check those benefits in the next section of this blog.

Have an Android App Idea?

In this section, we will discuss the benefits of Kotlin in a detailed manner. Get to know how Kotlin helps to build highly efficient Android apps.

Bytecode is the compiled format that is used for the Kotlin programs. It means, once the developer is programming the code and assembling it, it runs through a virtual machine and not through the computer’s processor.

The advantage of this method is that the developer can run the source code on any platform if it is compiled and run through the virtual machine. Moreover, if the Kotlin program is converted to bytecode, it becomes easy to transfer across a network and executed by JVM (Java Virtual Machine).

Kotlin is Capable to Use All Existing Java Frameworks and Libraries

The best advantage of using the Kotlin language is that you can still use all the existing Java libraries and frameworks. Moreover, the advanced frameworks as well that rely on annotation processing. The plus point of Kotlin is that a developer can easily integrate Kotlin with Maven, Gradle, and other build systems.

Easy to Convert from Java to Kotlin

With the help of a new feature integrated by JetBrains into IntelliJ, a developer can easily convert Java to Kotlin and save time. Also, you do not have to retype mundane code for Kotlin.

Do you still have some queries? Want to know whether Kotlin is better than Java or it is the same as Java, and many other questions that our reader frequently asked, then read our next section. Find all the questions one-by-one:

Herein we discussed and compared the major points of Java and Kotlin languages, explained why Kotlin over Java, and gave answers to some of the common questions related to Kotlin. We hope that this comparison helps you to understand the difference and decide which language is more preferable for you as an Android developer.

In any case, if you still have any confusion about whether to use Kotlin or Java for Android application development, what are the benefits of choosing Kotlin over Java, how to hire developers with expertise in Kotlin and Android Studio, get in touch with us through our contact us form or contact on given email address. One of our sales representatives will comprehend your app development project and suggest the right language to choose from.

Being a leading Android app development company, we have experienced in developing over 1500 Android apps. Refer to this portfolio section if you want to check how well our Android experts have built mobile apps for our clients.