Wi-Fi Hotspot 2.0 in iOS 7 from an iPhone Application Developer’s Lens 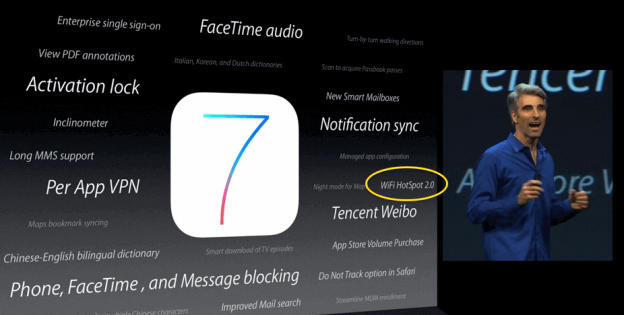 Wi-Fi Hotspot 2.0, a feature in Apple’s recently launched iOS 7 Beta is turning the talk of the town. The fraternity, the community, the industry or whatever you term it, seems to be discussing a lot about this feature. Don’t get this wrong but frankly, it’s very crucial to figure out what’s in it for everyone, particularly an iPhone application developer. Merely following hype is not a wise idea and seriously requires disambiguation. However you will first have to understand.

What Wi-Fi Hotspot 2.0 feature is all about?
Wi-Fi Hotspot 2.0 feature is based on Passpoint Technology which is different from usual Wi-Fi hotspots that are difficult to connect with requiring a user to typically discover and choose a network; and then request the connection to the access point (AP) every time. In the most cases, there is also a need to re-input authentication credentials.

Whereas Passpoint eliminates the cumbersome process by allowing users to directly connect to Wi-Fi hotspots without having to enter logon credentials and seamlessly roam from one Passpoint-enabled Wi-Fi network to another.

Yes, very likely this is now interesting you too. However don’t just get fascinated to shining side that obscures the factual one. Whether you are an iPhone application developer or someone into mobile app business, you must consider:

The technology may pick up in future, probably in a year or two however iPhone application developer, who intends to deliver value through an app, should consider the benefits, usage and deployment.

Tips and Advice for Choosing your Next iPhone Application Developers

Make an iPhone Photo Editor App Like Facetune, No.1 Photo and Video App in 127 countries