Believe it or not but clients prefer to hire iPhone application developer prior to engaging an android app developer, i.e. Android is usually a second option for majority of the companies seeking mobile app development.

Any mobile app development company that creates mobile apps for multiple platforms will narrate the same story. However, this doesn’t mean Android has no potential at all to influence or impact smart phone user audience.

If we talk about the 1st Quarter of 2013, Google Play had a higher percentage growth rate and a greater benefit in absolute downloads. Despite clients prefer to hire iPhone application developer over Android because of three following reasons: 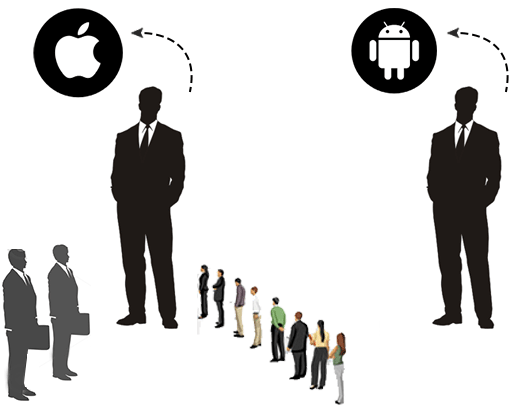 Even if we talk about the statistics, iOS App Store earned 2.6 times the app revenue of Google Play, as per App Annie’s Market Report for Q1, 2013.

So if you have to hire one then you should hire iPhone app developer over Android because of the bundled benefits you can gain from.

If you have questions or want to hire iPhone developers, contact us.

The Pros & Cons of Native and Hybrid Apps

Where is Everyone? Find Out Using a GPS Based Android Apps