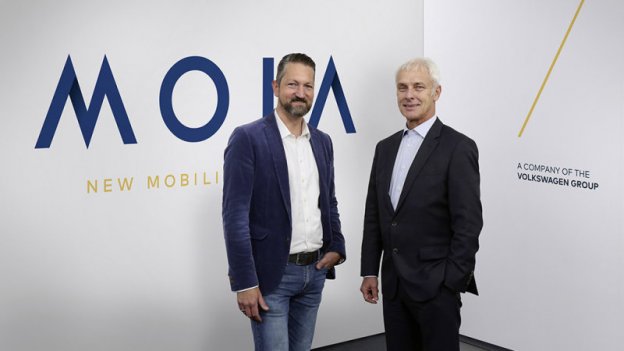 On December 5 2016, Volkswagen Group has launched a new, stand-alone mobility services company “Moia”, that will mainly focus on ride-hailing and on-demand pooling services. The company is working hard to shift from conventional car making to new motion mobility.

Beyond selling cars, the company focuses on catering customers, who prefer to pay for use rather than own a vehicle. Moia, a new digital business division, will challenge ride-hailing services such as Uber and Lyft.

Being the thirteenth brand, the all-new Volkswagen named after an ancient Sanskrit word for magic and it will specialize in lift-sharing, autonomous cars, and electrification. Headquartered in Berlin, this standalone company is formed to operate as a start-up, allowing users to share rides, borrow different type of vehicles for specific journey and get across cities at affordable prices.

Moreover, the German automaker also noted that Moia will develop and market its own mobility services either self-reliantly or in partnership with existing transport systems. The company is seeking to recover from its diesel emissions scandal and expecting a considerable share of revenues by 2025 from its new service business. By investing billions of euros in electric vehicles, self-driving cars, and ride-sharing app, VW is revamping its core brand.

Initially, Moia will start out as a 50-person startup, but the company is hoping to expand rapidly by the end of 2017. It will display the first glance of its vehicle next summer and will ultimately produce battery-powered, autonomous cars along with the new forms of transportation including public shuttles.

Set to be partnered with Hamburg, Germany, Moia will develop mobile services, which are reliable, efficient and environmentally friendly. Now, the company doesn’t have a carsharing business; however, the model has already been tested by both Daimler-Benz and BMW. It is expected that Volkswagen will unveil such a service in its bid to service extensive customer mobility needs, competing with Uber.

What CEO Says About the New Division Company?

Ole Harms, CEO of Moia, said, “Our sights are set on becoming one of the global top players for mobility services in the medium term. To achieve that we will be seeking to attract the best minds and technology start-ups”.

Ole Harms, the Volkswagen new division CEO, told reporters “The German carmaker is open to selling a minority stake in the business that is expected to make revenue of a couple of billion of euros in a few years.

When Will Moia Launch?

In the year 2017, Moia will surely be in the frame for an early roll-out and Hamburg has already signed up for a pilot scheme. The CEO of the Volkswagen Group – Matthias Mueller said, “Even though not everyone will still own a car in future, Moia can help make everyone a customer of our company in some way or another.’ He is expecting a major proportion of group revenues to come from Moia by 2025.

What do you think about Moia? Would you like to sign-up to have VW application on your smartphone? It’s the bet that the company is making by launching its new Moia transportation brand.

If you also have one such idea relating to the on-demand service apps, you can get in touch with us, as we are one of the leading mobile app development company based in India. We have already developed such transportation network app like Glovo, that you can check out.

Why Do You Need to Choose MVP Over MVC Android Architectural Pattern?