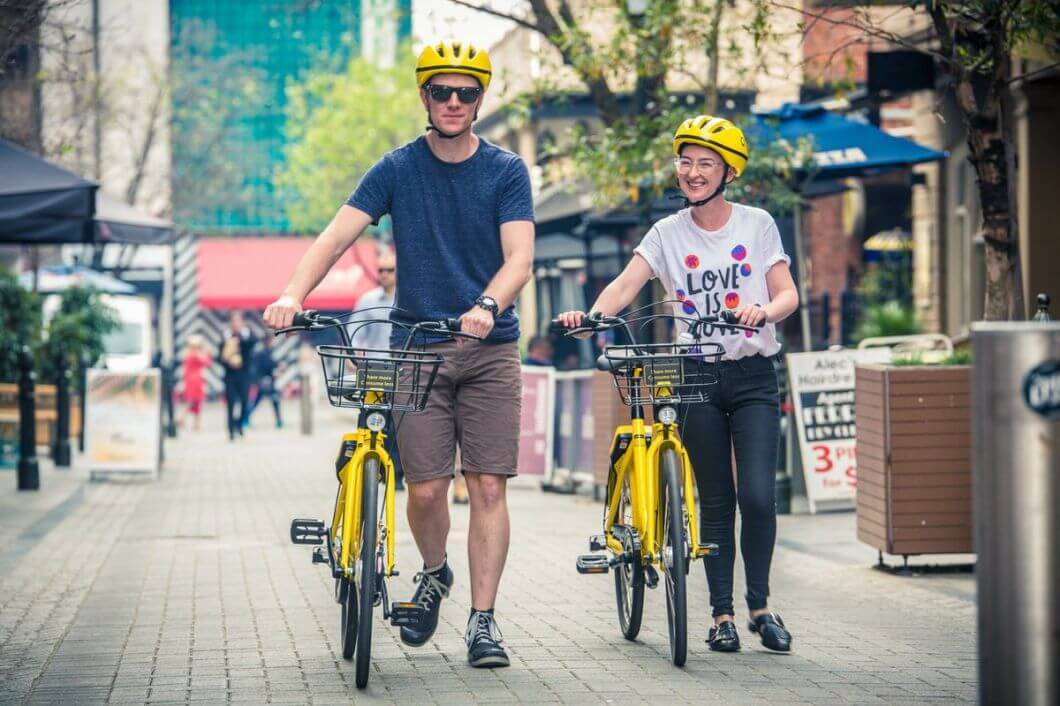 “This blog is for those entrepreneurs and startup owners, who run a bike sharing company and want to develop a bike-sharing app. In this blog, we have covered common features of top bike sharing app and its app development cost.”

Those days are back when people were riding a bike to go on short city trips. After taxi-hailing and car-sharing, it’s high time for bike-sharing service that allows people to rent a bike as their general means of transportation. On the other hand, bicycle-sharing system have already gained momentum.

Today, a lot of companies, that promise to go green, are providing various promotional schemes, encouraging people to ride a bike for their nearby work and short city trips. Riding in this way has become highly popular that goes from the big cities to smaller ones.

Fortunately, with the ubiquity of smartphones and advancements in bike technology, the last one or two years have observed a strong rise in the use of bike sharing apps and services across the world.

Jump Bikes, a NewYork based e-bikes maker, has recently got a huge $10 Million Series A funding by Menlo Ventures along with a partnership from Sinewave Ventures and Esther Dyson. Jump, which makes Pedelec e-bikes, plans to utilize this funding to get into emerging markets, make further hiring and upgrade its existing hardware and software products.

Since launched in the year 2013, Jump had raised a $1.1M seed round funding in the same year. Jump has already started its e-bike services in Washington D.C. and now plans to launch its services in San Francisco, Sacramento, and Providence, later this year.

Just before after few days, when Jump became the first stationless bicycle service provider to get a permit to launch its e-bikes rental in San Francisco, now Uber is planning to launch bike-sharing service in the upcoming weeks.

According to resources, Uber has partnered with JUMP to start an electric bike-share business known as Uber Bike, which will let Uber customers book JUMP bikes using the Uber app. However, to avail of its bike sharing service, Uber customers will have to go to the bike location in order to start the ride.

Similar to Jump, Spin, one of several dockless bike-sharing companies in the U.S., has added a station-less electric bike to its addition of station-less bicycles for bike sharing app Android. The all-new electric bike can travel up to 50 miles with a full charge, and Spin’s operations team can swap the batteries easily. Moreover, these newly added e-bikes are pedal-assist bikes, so the rider can spin up to 15 miles-per-hour with engine assisting pedal-power.

Furthermore, “Beijing-based, bike-sharing app, Ofo has secured $866M in new financing led by Alibaba Group to fuel its expensive rival with Mobike (Beijing-based stationless bike-sharing system), which is backed by Tencent, one of Alibaba’s biggest competitors”, according to the report from TechCrunch. Additionally, Ofo claims that this is the largest amount raised in a round by a bike-sharing company so far. However, Ofo and Mobike apps are the two largest bike-sharing companies in China.

Apart from Spin, there are many other best bikes sharing apps like Ofo, Mobike, LimeBike, Zagster, and some other well-known apps across the world. But do you know which of these bike apps serving its customers with exceptional services? Let’s have a look at the comparison of these top bike apps to know which one is widely used by people worldwide.

Top Bike Sharing Apps and Comparison Between Them

The competition between bike sharing rivals has been cut-throat, and each bike sharing service provider has been producing more bikes in order to increase the upper hand in a battle for market share.

In the month of July, Crunchbase News discovered about the increasing bike-sharing industry and it found that Ofo and Mobike are the leading players in the market, with a Bluegogo as a third competitor that is trailing far behind the pack.

Talking about the bike sharing growth, there are top two bicycle-rental apps, both have added more than 9m monthly active users in the four months alone in 2016. In the below-given graph, you can see how both apps: 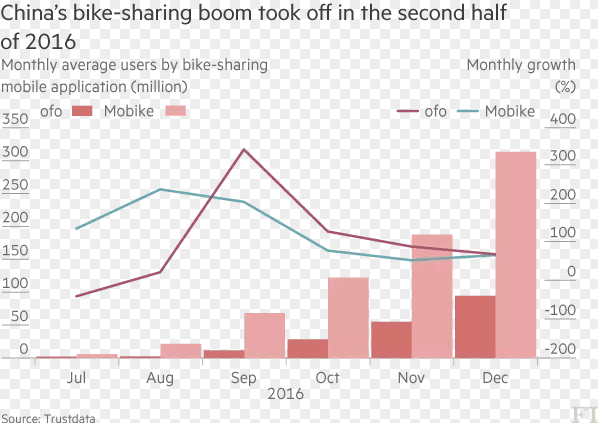 Well, the Ofo market share is increasing rapidly. The local and foreign investors are highly preferring to invest in the booming bike-sharing market; and today, Ofo become the world’s first bike-rental unicorn after reaching a $1bn valuation from its fundraising round earlier this month.

As the innovator in the dockless bike sharing platform, ofo is one of the multi-billion dollar-worth bike share companies in the market. And, it is the first company that expanded the dockless bike-sharing business from China to Europe.

It is a standalone bike share app has connected more than 6.5 million shared bicycles since 2015 and approximately 2 billion rides have been booked with its app in the year 2017. 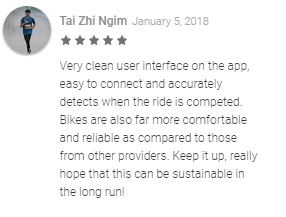 Furthermore, the ofo app has declared that recently it raised a $700 million Series E funding round that led by eCommerce giant Alibaba, Hony Capital and CITIC Private Equity. However, some of the existing backers, including ride-sharing firm Didi and DST Global also took part in it.

According to the latest news, the scooter-sharing platform Bounce takes over assets of Chinese bike sharing unicorn Ofo in India and aiming to continue solving commute problems ad scale. Bounce that earlier known as Metro Bikes declared that it has acquired the India part of Chinese-bike sharing giant Ofo.

Committed to delivering its global users with a convenient, efficient, green and healthy way of travel, ofo is a widely used and best bike sharing app that comes with an exclusive range of features. Let’s check out the top features of Ofo bike sharing application.

Want to build your own bike sharing app solution?

Want to develop a Bike Sharing App like Ofo?

How Much Does It Cost to Make a Bike Sharing App Like Ofo?

Now, you might have one of the major questions in your mind – how much does it cost to make an app like Mobike and Ofo including these essential features. Let’s check out.

To give estimated hours and cost, we contacted one of our full-stack mobile app developers, who have experience in developing on-demand mobile solutions. He provided us with the basic hours and price idea about bike sharing app development:

However, these are the approximate hours of developing a dockless bike sharing app similar to Ofo or Mobike. These app development hours vary depending upon the developer you hire and android apps development company that you hire.

You have just gone through with the Ofo growth and app development hours, in case, if you still have any query or confusion related to bike sharing app development or you want to get an exact cost of developing best bike sharing app including features like locating bike (GPS), database management, and payment gateway integration to auto payment to parties like owner and investor, you can get in touch with us through below-given form and our mobile app consultant will get back to you with the exact cost for developing a custom app for small to medium enterprises.