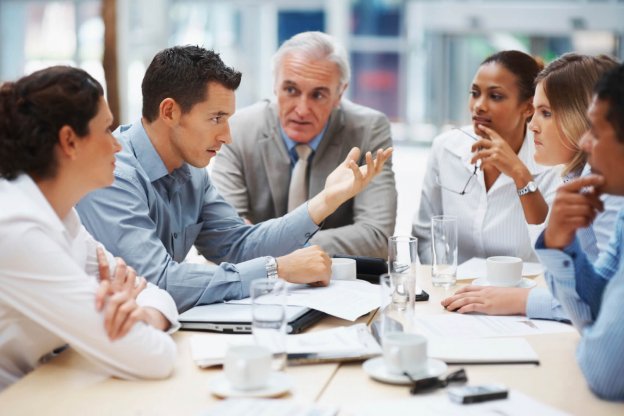 This blog is for those tech startups who are keen to know about the concept of Family office investment. So, we’ve rounded up top three reasons why you need to consider direct investments by family offices.

Where there is money, there is wealth. In all likelihood, money is what the most of us have or don’t have. But, it is what we use to buy apparels, house, pay rent or put down a money to start a new business or we can say a startup. Meanwhile, there is a term “funding” that is directly related to the money, and everyone must be familiar with it.

When the right fit for raising funds, then the family offices can be the best possible place for the startups and entrepreneurs to get the direct capital. Family Office is an alternative to Venture Capital.

There are several companies currently raising rounds of venture investment, which are inevitably learning some hard truths. Initially, VC dollars are not as readily available as they were in the previous times, and for the companies, which are receiving funding, are finding that the terms are becoming increasingly less pleasant. However, the good news for the startups who are looking for funding is that a new pathway for direct investment is emerging. So, let’s understand the concept of “Family Office”.

What is Family Office?

Family offices are a wealth management concept wherein ultra-high net worth individuals or families pool their liquid wealth with the express aim of preserving and growing.

In other terms, we can say that Family office is a private wealth management advisory firm, which is established by an Ultra-HNWI (HNWI: High-net-worth Individuals) in order to manage family’s private wealth. In actual, a family office goes beyond just managing wealth. It also helps to secure a family’s financial future by building, preserving, and transferring family wealth and legacy.

Half of Americans hold no stocks, bonds, or real estate, and most of the remaining half that are lucky enough to do so to choose to manage their assets on their own or with the help of a financial advisor. But, when you as a startup moves further along with the privileges end of socio-economic curve, managing, preserving, and growing one’s wealth becomes more complicated.

The world’s highest-net worth (HNW) families employ an entire office full of accountants, lawyers, and investment professionals to manage their assets. These family offices manage the assets of more than one family, but they are still comparatively close-knit. If we’re talking about early days of family offices, they haven’t made many direct investments into individual tech startups rather than favoring a more diversified approach to tech investing by being limited partners in venture capital and other private market funds.

1. SFO (Single-Family Office): SFO is an organization, which is created to support the financial needs of a specific family group. Generally, a single-family office becomes affordable for clients with at least $100 million or more of investable assets. The examples of billionaires who created single-family offices to manage their wealth include John D. Rockefeller (the first American billionaire), George Soros, and more recently Oprah Winfrey.

2. Multi-Family Office (MFO): MFO is an organization that provides family office services to more than one family group. It also provides a similar range of customized services by the single-family office, but without the need to set up an individual family office infrastructure. The service provided by MFO becomes affordable for Ultra-HNWI1s with the wealth of about $50 million or even more. The examples of multi-family offices include Rockefeller & Co. in 1882, and Bessemer Trust, and Wells Fargo Family Wealth. 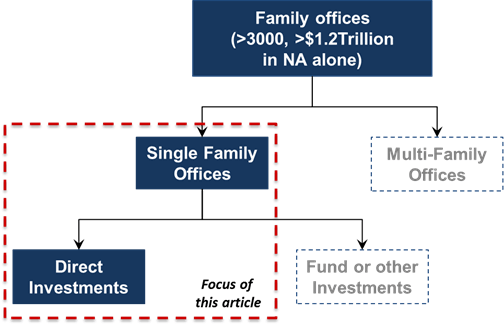 To sum up, we can say

How Family Office Investment is Different from VC (Venture Capital)

Family Office Investment is Right for Startup only if –

Top 10 Family Investment Offices With The Most VC Deals

In the below image, you can see the names of top 10 Family Investment Offices that ranked by the total venture deal volume. 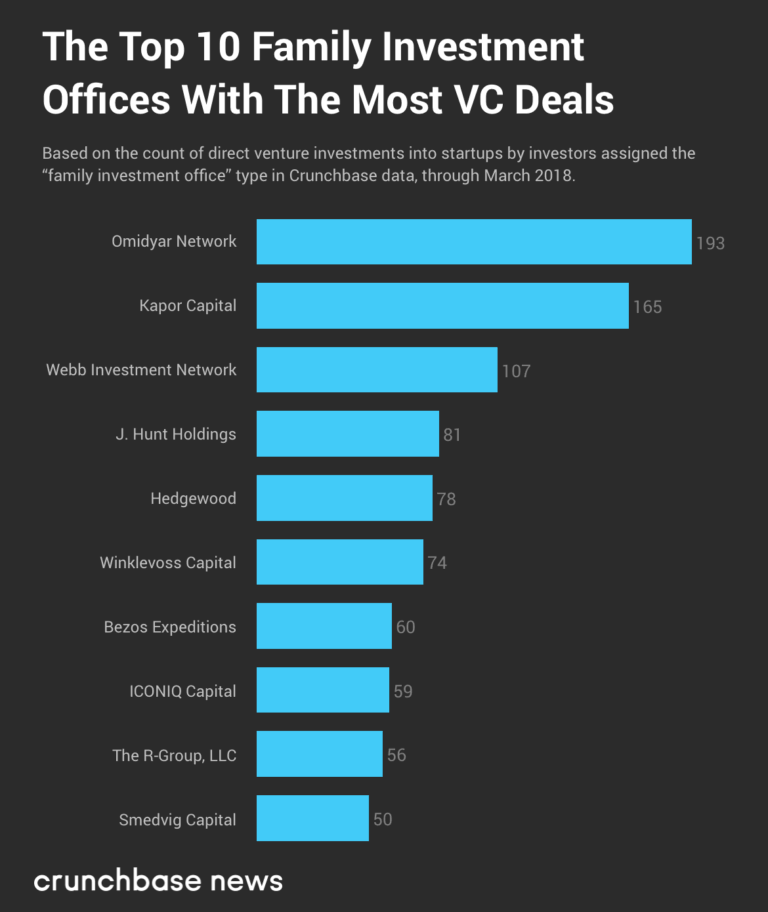 1. The Direct Investment of Family Offices Has Picked Up The Pace 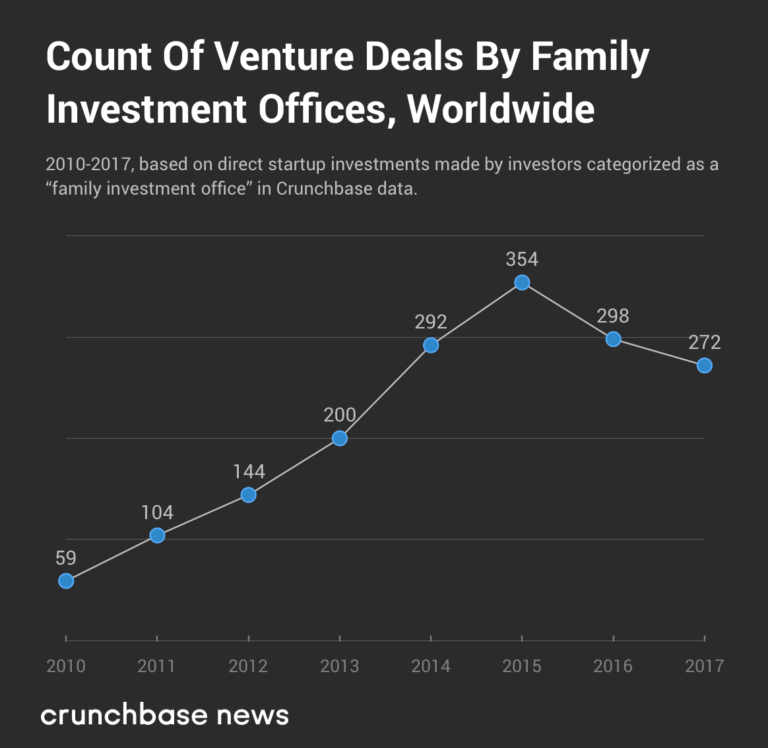 The above image is based on over 1700 venture deals (i.e. Seed, Angel, Equity, Crowdfunding, Series A, Series B, etc.) struck with individual technology companies by 193 family offices located around the world.

The 193 family offices with listed venture investments are only a fraction of total count of such groups that tend to be private. However, it is combined with the fact that many startups are slow to announce funding, and it is not like the list of funding rounds of their participants is comprehensive. It is safe to consider above figure as a directional indicator of general trends.

Now, the question is what are those trends?

Firstly, when it comes to the deal volume, family offices’ startup investment activity tracks with the broader venture investment marketplace as it includes individual Angels, Venture Capital groups, Seed funds, Accelerators and others.

In the above graph, you can see the growth of 2015, there was a run-up in the number of deals being struck. After reaching high point, the deal volume began to decline in the United States. According to the report from Crunchbase News, as investors favored denied writing many smaller checks to early-stage startups and rather favored fewer, larger checks with later-stage tech companies.

Bottom Line: On a global scale, the projected deal volume is roughly flat on annualized basis from 2015 to 2017, whereas reported deal data is down primarily because of reporting delays. This is due to the fact that there are more U.S. family investment offices that invest in the startups than international ones. And, it is not surprising to see that the family office deal volume cuts closer to the U.S. market, in general.

In the image-given below, we compare the reported deal volume between VC funds and family offices. VC funds have a lot of known deals per year. On the other hand, family offices have much fewer recorded startup investment deals volume against 2010 levels. In doing so, we are able to deliver a relativistic comparison between Family Office investment and VC funds. 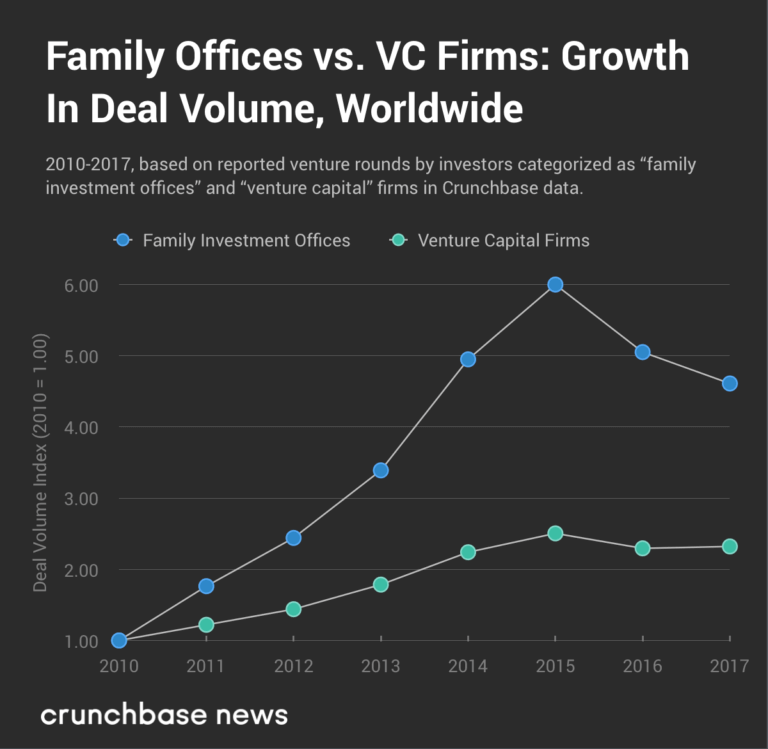 Bottom Line: In relative terms, around a range of measures, the deal volume growth was higher and faster among family offices than VC funds for a significant period of time.

Family Offices have private equity capital to be preserved across generations, unlike venture capital firms that have contractually shorter time horizons. There are biggest differences between Family offices and Venture Capital

All we can say that as compared to Venture Capital, Family office investment is still the very new thing in the marketplace, no matter how family investment office old is.

According to the above points that Family Offices are growing as participants in the direct deals are also growing. We believe that in this competitive world, Family Offices investments are compelling alternative to funds. However, the concept of family investment offices is capable of drive better returns in aggregate in asset class. However, in order to achieve such returns, it needs sufficient preparation on the side of the family office, and an informed evaluation from the side of the entrepreneur.

Bottom Line: Family Offices represent a deep but largely untapped well of venture funding for both tech startups and the later-stage entrepreneurs who have taken enough time to understand the niche’s workings. Family Offices embrace different investment styles, organizational structures, and track records, but Family Offices represent some of the most patient, long-term supportive sources of capital in today’s market.

It should go without saying that investing in startups is not for every high net worth individual or family. But as long as tech startups are concerned, they continue to attract younger generations who will eventually take up the task of using a fortune. You don’t need to be surprised if many of them look to the investment groups highlighted for some inspiration.

If you as a tech startup thinking to develop your own mobile application and have any query related to it then you can directly consult us as we’re a leading iOS app development company, and have already developed over 2000 mobile applications in diverse categories. You can get in touch with us through the below-given form, and our sales representative will right back to you within 48 hours.