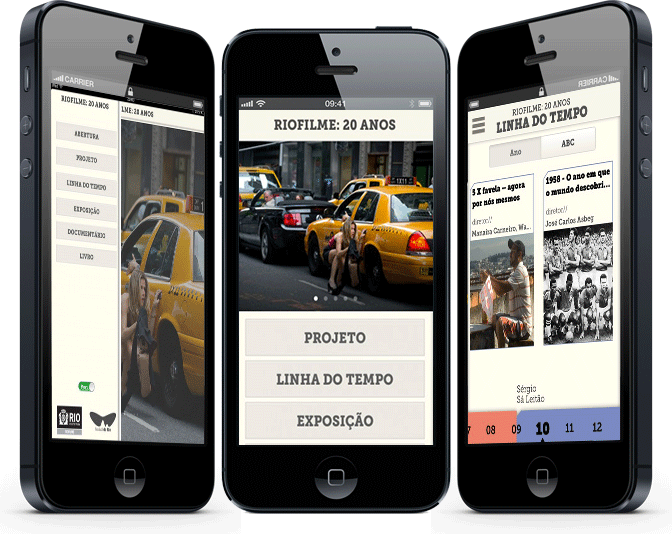 The celebration of 20 years of RioFilme consists of a set of projects designed completely independently by its organizers and to leave a legacy for the film industry and the general public.

The application is one of the main products. The bilingual content with information on all the movies from now will be available for free to mobile devices such as tablets and smartphones.

The greatest legacy of these projects are in the field of memory of national cinema, an area in which the Brazilian cinematography is both sophisticated in recent years. Months of research resulted in the development of detailed profiles of 244 long produced and / or distributed by RioFilme and effectively came to cinemas by the end of 2012. Whereas RioFilme was the main distributor of Brazilian films in the 1990s and resumed active position in the last four years, let say this is the most reliable and comprehensive database on long produced during the call to Resume.

In parallel to the research, the project includes critical synopses of 244 films. The films were divided into batches of ten film critics, who did a remake of informative and opinionated long. Critics had total freedom to work and texts do not necessarily reflect the views of RioFilme.

The final product of this extensive research effort and critical review is the heart of the application, which shows, for each film, the following items: sheet with title, director, producers and distributors, duration, date of commercial, public, and income , major awards and professional team, photos, poster (or DVD cover or VHS), critical synopsis and link to the movie trailer. Are always indicated the sources from which the information was extracted.

In addition to the application for the celebration of 20 years will be released a book in Portuguese and English with information about every film company, the feature-length documentary Twenty (RioFilme, 20 years of Brazilian cinema), director Carlos Diegues, an exhibition of posters of the company’s productions, and film showings on Channel Brazil and in cinemas.

Importantly, this project celebration of 20 years of RioFilme does not have a commercial.
The book is distributed free of charge, the documentary and application can be downloaded at no cost and exposure has free admission.

"We needed to create an iOS app to calculate gas turbine performance and availability based on the user’s selection. Space-O Technologies developed an iOS app with the required calculation functions. They delivered a simple, fast app that’s versatile and functional. They were extremely smooth and efficient, requiring minimal oversight from our side. They were flexible enough to accommodate internal preferences. Internal stakeholders are pleased with the app’s usability and unintimidating flow. Independent and adaptable, Space-O Technologies instituted an effortless collaboration and respected established practices."