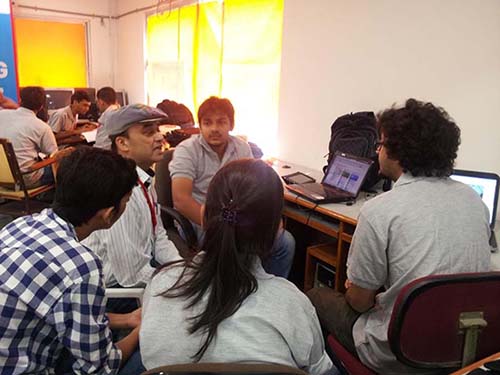 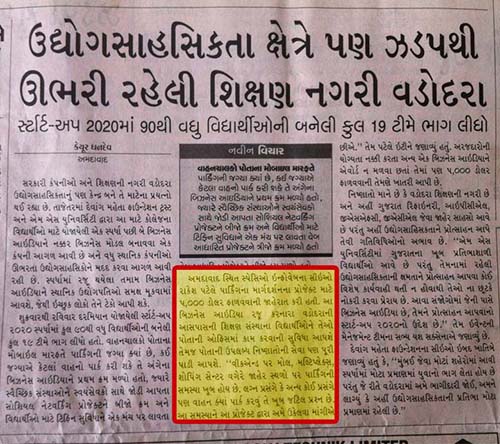 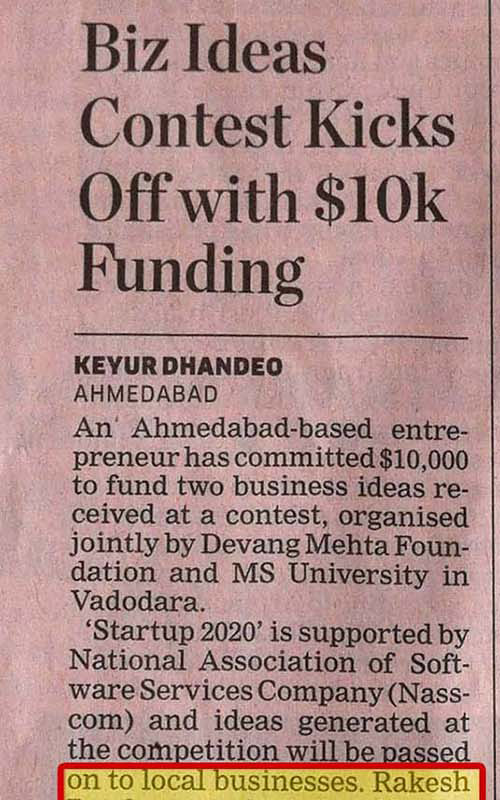 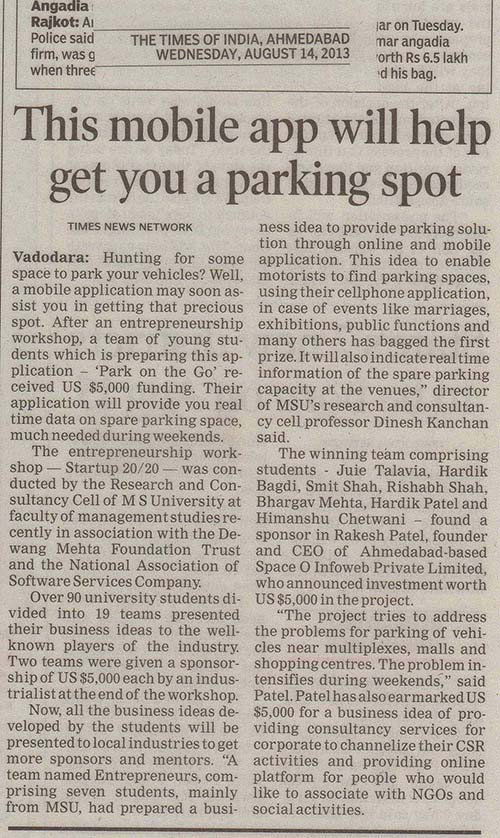 CEO of Space-O, Rakesh Patel was invited to mentor participants of Startup 20/20, a contest organized by Devang Mehta Foundation and MS University at Baroda, Gujarat.

Rakesh mentored over 8 teams and worked with them to solve there problems about their idea or business plans and motivated them to think differently and see a bigger picture of the game, later in afternoon he worked with the teams to review their Mock presentations and suggested necessary improvements.

In the words of Rakesh:

“I saw an amazing spark in the young generation. They exhibited capabilities to think out of the box and had remarkable energy. They did not just think differently, they wanted to do the things differently and solve real world problems.  This reminded me of the days of my studies. All that was required was a push, to work with the next generation to make their ideas come true.

“Even Eagles need a push,” says David McNally. (Watch this video if you don’t know what that means). I believe in that and wanted to assume responsibility to ensure that they’re successful as chief executive of Space-O, whose mission is to make a difference in all what they do.

At first, I was thinking about sponsoring one team, but I found it so difficult to decide which team to choose as both the teams were so good that I convinced myself to sponsor both the teams.

On behalf of Space-O, I’d like to thank Prof. Yash Saxena of GTU for inviting us to Startup 20/20 event and be a part of it.

We also want to thank Ibad Khatib, CEO of Dewang Mehta Foundation Trust and all members of MSU for organizing and making this event a success.

The team that won the first price came up with an idea called “Park : On the Go” to solve parking problems in the cities.

About the Projects that Space-O will sponsor:

Parking problems are faced by all of us and everyone would want to contribute to solve that problem if given a platform.

On-the-Go will employ crowd-sourcing model (like Wikipedia) to gather the data and build a database of parking and no parking zones.

For the end users, access to this data will be made available free through various mobile and web apps.

The idea called “Radius” did not win the price but Space-O will still sponsor this project as it looks more promising to us as this team is after building a platform that will do all the data mining and analysis about an individual for building there credibility.

The problem this project will solve is enable individuals mostly employees to build there Credibility Score. For example, if an employee has got a recommendation from a client or she has been rewarded for outstanding work, her credibility score would increase and if and employee messes up with some legal issues or violates a confidentiality agreements it will indicate negatives on his score.

The score will be available as a “Badge” that you can put on your resume or profiles that communicates various characteristics about him.

In today’s world where people are changing jobs faster than ever, employees with high credibility score are going to be preferred by the companies.

On a broader scale this sponsorship means:

The CEO of Space-O Technologies, Rakesh Patel, was quoted in the Ahmedabad newspaper, Sandesh. The newspaper wrote a feature article on mobile internet usage around [...]

"I hired Space-O to help build my fitness and food log mobile apps. Professional, knowledgeable, and skilled, Space-O delivered a detailed mock app and a fully featured product that launched successfully. The team communicated well and readily grasped concept and intent. Their communication and ability to understand requests were top-notch. I was most impressed with their professionalism, their extensive end-to-end knowledge, and their design capabilities."

"The app was successfully launched and fulfilled original expectations. The Space-O Technologies team was communicative and effective in completing the project. The app is available in the Google Play store, and we’re thrilled with the final product. They were a highly efficient team to work with. They were strong communicators—whenever I had an issue they were available. Additionally, they were timely in getting deliverables to us."