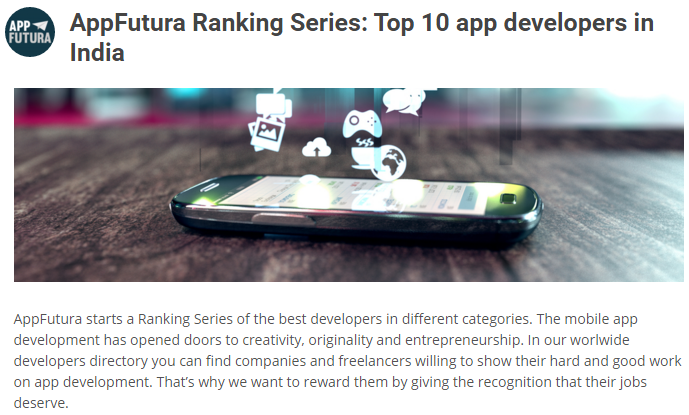 As a part of the Ranking Series, AppFutura published list that concentrated on the Top 10 Mobile App Development Firm, that are based in India, in 2015

AppFutura is a platform where it lists the top and best mobile app development company across the globe. As a part of this experience that AppFutura has, in being the mediator between the developers and the app making firms, they have done their job well of observing what goes on around. Based on client reviews or the completed projects, AppFutura started writing their Ranking Series, which shows the Top 10 of best app developers, best apps made and more.

This was an attempt made by AppFutura to make it easy for the app makers to find good companies that create apps and that can realize the dream app of the companies in concern.

Find the entire coverage of The Top 10 App Developers in India, by AppFutura, here.

Space-O, a new set of IT Services Provider – The Economic Times

Firms like LeewayHertz and Space-O, called offshore product development centres, are seeing a significant chunk of their revenue come from the Indian subcontinent. - The [...]

"Recently we worked with Space-O in developing our IOS app for the iPad Dexter and Friends. The project was handled from start to finish with great care, I enjoyed working with Ankit Shah and the rest of the development team. They were very responsive in dealing with minor set backs such as bug fixes. Their quality and assurance team didn’t stop till I was completely satisfied with the final product. They also were proactive in suggesting improvements to the user interface and helped us develop an easy to use parental control which allowed our app to qualify for IOS app store’s new ‘Kids’ section. I would highly recommend them if you are looking for a company who will stay within a reasonable budget and deliver a top quality product."