This is an idea of a college junior, who was on the spring break in Florida. Seth Miller, Rapchat’s co-founder and CEO, realized the huge potential that social media held in the freestyle rap area. After talking with his professor, Miller and his co-founder Brandon Logan, he took an idea to Startup Weekend, a competition in Athens, where more than 20 entrepreneurs are ready to compete.

Rapchat application won the first prize at the Startup Weekend of $1000 that they used to pay Casey Capps, a Business Systems Engineer at Ohio University, to develop an application.

Rapchat was released by  July 2014, shortly after Miller graduated from the college and started working at an insurance agency in Ohio. However, he quit his quit his job and becomes full time CEO of Rapchat.

Originally, the team includes Seth Miller, Max Yankee and Brandon Logan, along with 12 employees of marketing, iOS development and web development. Miller and Sam Marshall, the lead programmer, act as only full-time employees. Logan serves as the Creative Director while Yankee and Capps are no longer be the part of Rapchat.

What Exactly Rapchat App Is? 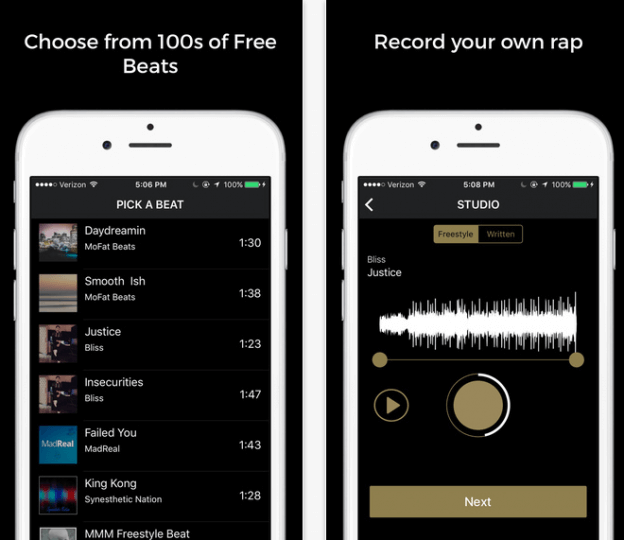 Rapchat app, available for Android and iOS, enable users to record and share their raps through Twitter, Facebook and text. Over 4.5 million raps have been made and shared by the users this year. Being a popular app among the college and high school students, this application allows users to share their freestyle raps with just a few minutes.

Users just have to choose a beat from more than 50 options and press record and freestyle over their chosen beat for less than a minute. With ‘Share’ button, users can enable to share their rap through text, Twitter or Facebook.

Rapchat has enjoyed around 430,000 downloads in 2015 without any paid campus ambassador program or any mobile ad networks. Since winning the $1,000 prize in 2013, the Rapchat team has been completely bootstrapped and now, they are seeding round between $500,000 and $2,000,000. In late 2014, Rapchat added a function to more easily facilitate the sharing of raps that the platform blew up.

Gradually, Rapchat has spread through the groups of friends, sports teams and the swim team at Middlebury University. This application has attracted millions of people, who want to rappers and share their freestyle raps among their friends.

Miller Said:
“Some of our most popular raps consist of high school girls gossiping about boys or football players roasting other teammates.”

What do Users think about Rapchat?

Joe Porco admitted that he doesn’t “have a great rap voice,”, however, he enjoys sending raps with inside jokes to his track teammates at Colgate University. “I like writing raps and trying to out-clever my friends basically.”

Eric Moore, Porco’s teammate, said that he and his friends on the track team “have developed rap personas and basically just … try to one up each other in how ridiculous we can make our raps.”

Most of Rapchat’s users are students, who are experimenting with a new creative outlet and method of communication. The best thing about this type of application is it provides engaging mental exercise for users, who want to try rhymes and jokes with rapping.

RAPCHAT IS THE GREATEST THING TO EVER HAPPEN TO ME😂😭😂😭😂

Wanna Convert Your Crazy Idea into A Million Dollar Apps? Don’t Know What to do With Mobile App Idea?

Rap is inherently cool. There are many different applications enabling users to communicate with text, photos and videos. One of such app we have developed is an app that will blast people’s mind away is Teezr.

With this application, you can easily send censored pictures and messages to your friends and that picture will be uncensored once the set timers reach to zero. Tease your friend by taking a picture or write message, add censors and set timer.

Have Unique App Concept that Both Users and Businesses Want? Let’s Discuss

4 Features to Consider for a Succesful Transportation App Development Like Moovit, Transit