Even though it is difficult, you did it.

You found a great app idea. But, the very moment you got an app idea, you have realized that this is not all to create a great app.

A slightest mistake of yours, on the very first stage, could risk your money and your time. We also know that deciding on one approach involves a lot of considerations. Considerations like app development cost, platform, performance, and several essential factors.

To ensure you make the right decision, we have crafted this blog for you. Reading this blog, you will understand more about the benefits of native apps and get to know when you need native apps for your requirements.

What is Native App Development?

A native mobile app is targeted towards a particular mobile platform. This means, an app intended to work on the iOS platform will not work on the Android platform and vice-versa. Now, you must want to understand this better with a simple question in terms of programming.

What does native mean in programming?

Suppose you want to create an app, particularly for an Android platform. This means you will probably choose Java or Kotlin to build your app. Now, this app built natively will run only on the Android platform and will be known as a native app. And this goes the same with the native iOS platform.

Get a free consultation from a mobile app expert.

What is the Difference Between Native vs Hybrid Apps?

Before we move forward, you need to know what is a hybrid app. This way, you will be able to connect and understand more about the differences between native and hybrid apps.

Hybrid applications are also known as cross-platform apps. The reason being that it is a combination of native applications and web applications. We have just discussed native applications, but talking about web apps, these are websites that act the same as any app. However, web apps cannot be installed on a device. You need a browser to access web apps.

Hybrid apps use technologies, such as Apache Cordova, Xamarin, React Native, and Sencha Touch. Many companies like Skype and Walmart use this hybrid app development technology. Also, hybrid apps use a single code base to work on multiple platforms, where you use different code base in native apps. This is also represented in the following image. This was the brief introduction of a hybrid app. Now, you will be able to relate more to the differences between hybrid vs native apps. So, without any delay, let’s find out those differences one-by-one:

These are the advantages and disadvantages of native app development that you must consider before developing your native application. 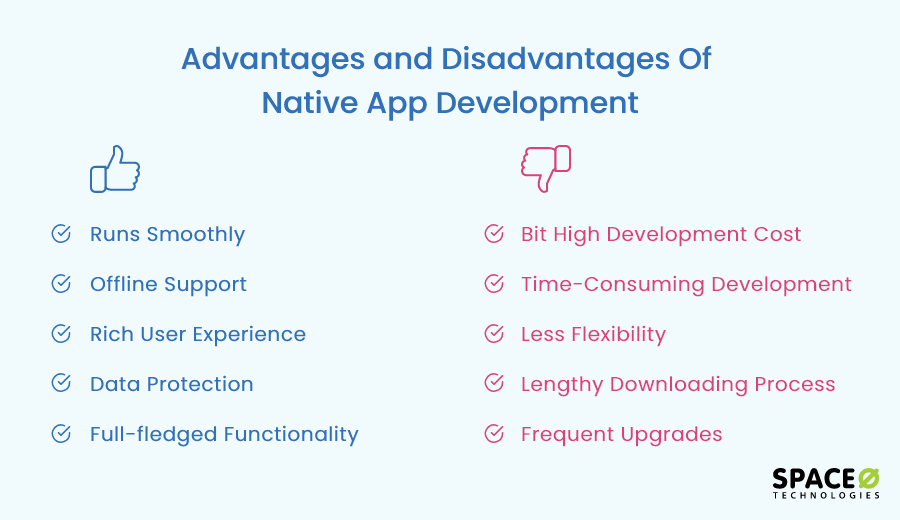 Know whether any of these factors of pros and cons will affect your native app development approach or not. Come, let’s dive in to find these factors in a better way.

After considering all these factors of native apps, it can be concluded that even after investing a little more in native app development, it is worth it. Not only because native apps are highly reliable, but to help a business in increasing brand presence, cultivating customer loyalty, and the most important is to generate high revenue.

But before going ahead, you must check the essential factors of each native app development framework. We have compared them with each other, so you know which one will perfectly fit your requirements.

Apart from this, we have also answered some of the most asked questions by the readers. Let’s check them one-by-one.

Which are the best tools for native mobile app development?

Here are the best tools that you can use for native app development.

Which are some cross-platform development frameworks?

Which languages to choose for cross-platform development?

With this guide, we hope now it would be easy for you to get the answer that you were looking for. Now, it is your time to build a brand new app that achieves various milestones.

In case you need any assistance from our expert app developers or want to know how much it costs to develop a native app, feel free to contact us. We have experienced in developing more than 3500 Android and iOS apps, and also have over 98% job success on Upwork.

Just fill the contact us form, and one of our team members will contact you in a very short time.