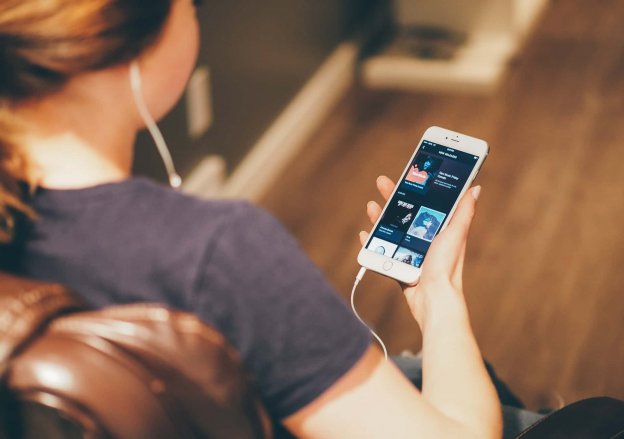 Everybody likes music. At least the majority of them does. But, at the same time, life is also getting busier than ever and there is no time to search different tracks, downloading them, sorting them into playlists, and then listen. Instead, everybody now prefers streaming their favorite music online to get an effortless user experience in the matter of a couple of clicks. Smartphones and high internet connectivity only compliment this trend.

This blog post will shed some light on the idea of creating your own music app like Pandora and Spotify with stages to pass, features to add, and factors to take into consideration, for the sake of developing a successful app like Spotify.

Before getting into the subject, take a look at how people enjoy music streaming services of easily accessible apps like Spotify. 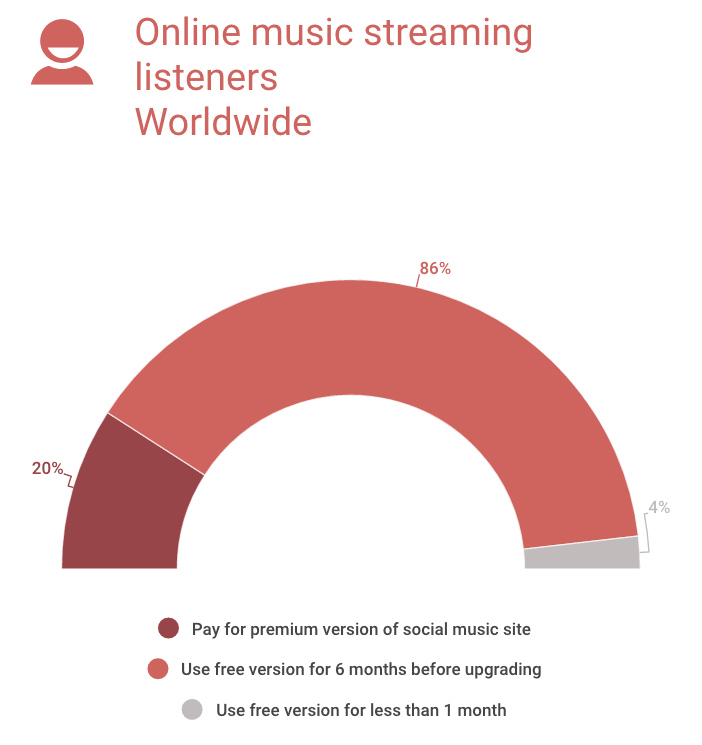 Well, people globally shifting to their smartphones for fixing the daily life problems and spend 90% of this time in different mobile apps. Also, did we mention that Spotify just reached 50 million paying users? 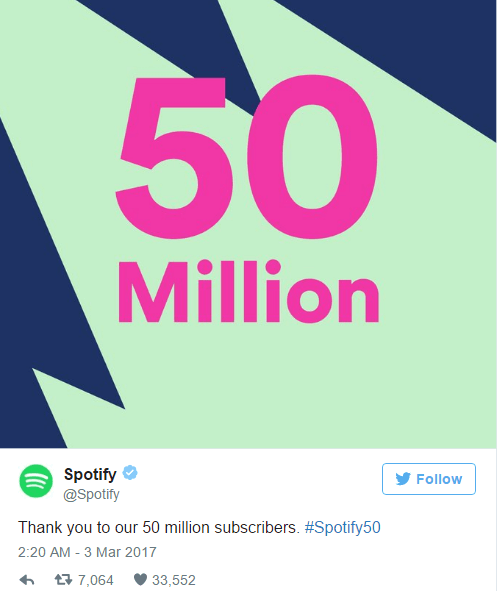 Their service is currently available in 60 markets with a catalog of more than 30 million songs on off. Moreover, Spotify has given its app the biggest makeover, focusing on making the experience better for its paying subscribers, according to the latest report from TechCrunch. With the makeover, the company has simplified the app’s navigation by eliminating the number of buttons and it has revamped its search page that now incorporates elements that earlier found in Browse.

In this image, you can check Spotify has become one of the most downloaded streaming apps across the US iOS App Store in 2018. After Spotify app, Pandora, Soundcloud, YouTube Music, and Amazon Music are also in the list. 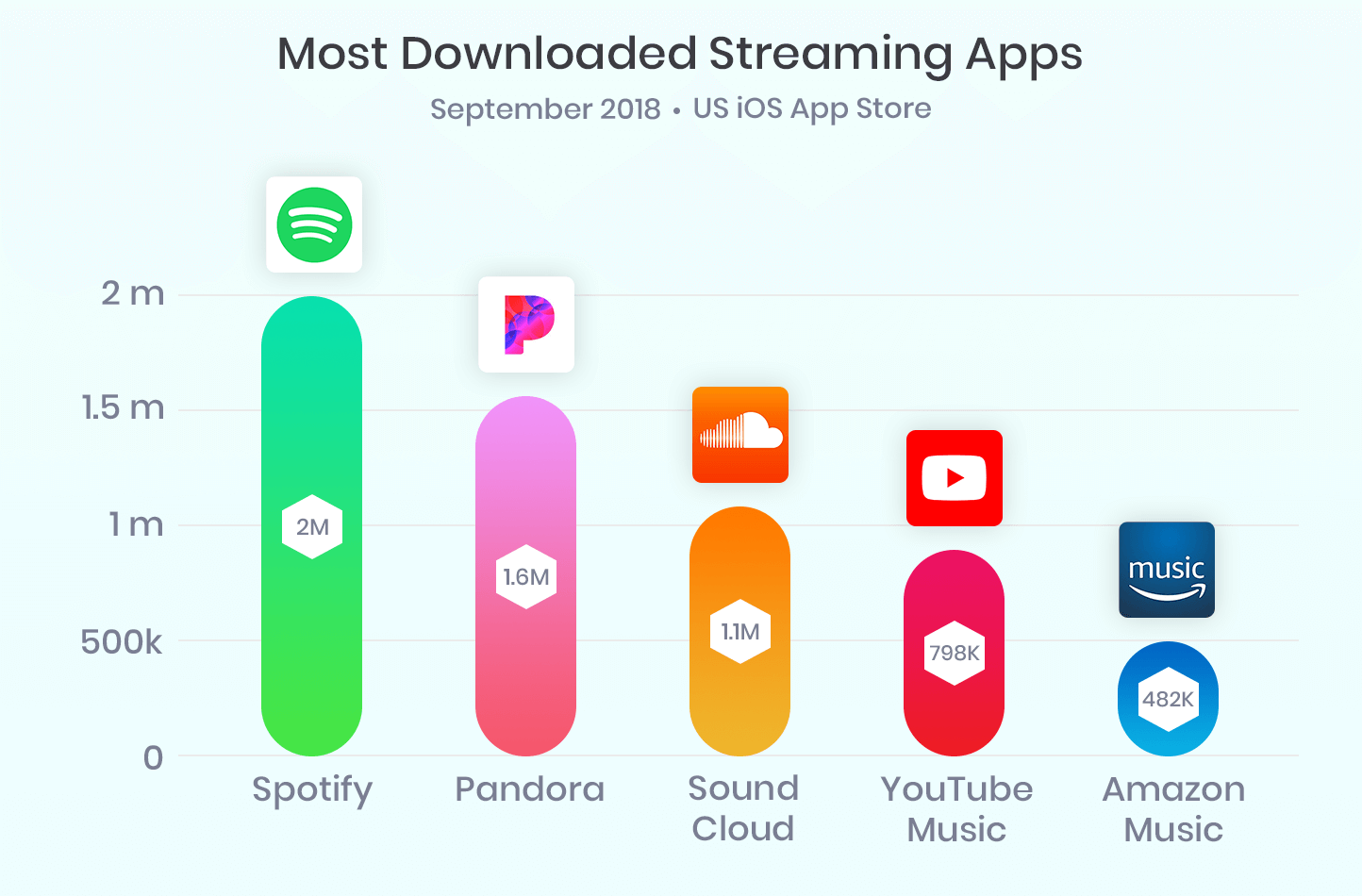 However, things are not ended here. Spotify for artists app allows music artists or its app users to take control of their profiles as in who’s listening to the tracks posted by artists. Spotify for artists is a one-stop app to track new music as it goes live, control the presence on Spotify, and learn more about listeners.

Looking at the latest report from sensortower.com, Spotify is continuing to see healthy growth across the world, making its single best month for new user numbers yet in January. As per the estimates, the app has added 17 million new users on mobile last month globally, which is an increase of 16 percent year-over-year from the 14.6 million, who downloaded its app for the first time last year.

As per another latest news from TechCrunch, Spotify has officially redesigned its application to enhance user experience. The redesign puts a greater emphasis on podcasts as the company has announced a new version of its Your Library section, paying subscribers on its premium plan.

This online streaming service works differently from many other music services on the net. In fact, its main aim is to make your listening time as seamless as possible. Moreover, Spotify’s music is stored on various servers.

To enable your smooth experience, Spotify checks your device’s cache first to make sure you didn’t listen to this sound and it’s already there. And more importantly, it enables users listening to all this music legally by paying royalties to authors.

Apart from this, Spotify also introduced a new feature for its users called Line-In, which let users suggest edits in metadata for any song or album by clicking on the three-dot menu icon next to any song, album, and select ‘suggest an edit’. It will then open up the Line-In website.

Once the Line-In website opens, users will be able to suggest edits to the metadata of that particular song, album. Though users won’t able to change the metadata using this feature, they can only make suggestions.

Once users have submitted the suggestions, Spotify will check those submissions to match up with other users’ data and also keep track of a user’s past performance. Spotify will also test its users to make sure they have enough knowledge about a particular genre. If a user starts to show odd results on any of these fronts, their suggested edits will go to the bottom of the list.

How You Can Make Money From Your Own Music Streaming App Like Spotify?

To get a closer insight at Spotify and other apps like Spotify, their business model can be broken into two main parts.

According to the Spotify website, they collect revenue from advertising within free accounts and from premium subscription fees. Although, they claim to spend a major amount of money to give rewards to artists.

This basically concludes how you can earn money with Spotify Clone.

But, still, where to start?

Your Guide to a Music Streaming App Like Spotify

The idea is Everything!

Before your music streaming app development, you must specify a whole concept of the app, find similar apps like Spotify, and of course, think of something that will make your app special & one-of-a-kind.

The music industry has a truly big potential. Though, that’s not enough for running and spending every penny you have for your music streaming app. You need to study your target audience, what they like, how they prefer service like yours, make an important decision of the most effective way to hit them with your product. Later, make the adjustments according to your users’ preferences.

Ask in your circle for references, communicate with several agencies, and arrange a meeting or conference call to discuss your app idea with the development team and ask for their suggestions as well.

To put it all together, let us also mention that a huge privilege for stepping into music industry business is a significant gap of people, who are still holding onto the same old radio stations to enjoy music. And, just remember, make your app effortless and easy for your users in everything because that’s an absolute competitive advantage.

In case, if you still have any query or confusion regarding music streaming apps development or how much does it cost to make music app? then, you can get in touch with us through our contact us form. One of our sales representatives will revert to you within 16 hours. The consultation is absolutely free of cost.

Have a Music Streaming App Like Spotify Idea in Mind? Let's Discuss!

Planning to Create a Dating App Like Tinder? You Can’t Afford to Miss These Points That Make It Stand-Out

How to Conquer Uber for Trucking Logistics Industry in the US: 3 Actionable Tips to Make a Successful Uber Freight App