Mobile App Economy: Now, After 5 Years, and The Building-base of $6.3 Trillion

If you are in the mobile app industry, care about the current state of the mobile app economy, and how it helps a nation to grow overall GDP, this article is for you.

This article is for you because according to App Annie Report, the global mobile app economy is going to worth $6.3 trillion by 2021 that is increased from $1.30 trillion last year. According to ReCode, things are going to explode in the next five years.

While in the same time period, the user base is also going to double almost from 3.4 billion people using apps to 6.3 billion. And the total time spent in mobile apps will also increase to 3.5 trillion hours in 2021 that is up from 1.6 trillion in the year 2016.

What Exactly is Mobile App Economy?

In simple words, mobile app economy means a range of economic activities that are surrounded by mobile apps. Mobile applications have created new opportunities for entrepreneurs and changed the entire process of business development.

Moreover, the mobile app economy comprises the sale of apps, the advertising revenue generated by the apps, purchasing products with those apps and the hardware devices that are designed to run applications.

According to one article published by Washingtonpost.com, gaming and travel mobile apps are going to get momentum in the market. Today, people in Japan, India, South Korea, Brazil and Mexico are spending approximately four hours a day on their mobile applications and it is predicted that the usage in those countries is going to increase.

There are approximately 3.4 billion app users, who are spending $379 in applications across three different forms of monetization last year or we can say $0.80 per hour, per person. And it is expected to grow to $1008 per user by 2021. You can check out the given graph to better under the future of app economy:

It is obvious that the figure will vary from market to market and country to country. Let’s take an example of Japan, where users made an average of $13.98 per user per hour and they have spent approximately 68 billion hours in applications in 2016. In the meantime, the China and U.S made $2.36 per user per hour and $2.01, respectively.

App Annie, a business intelligence and analyst firm, also noted that how Alibaba had just declared about the mobile accounted for 79% of the total transaction value generated by its retail marketplaces in China in the fiscal year 2017 that was up by 65% from last year.

It is predicted that the western markets are going to lag behind this turn, comprising consumer spending and ad spending’s move to mobile. As we are draped up in legacy systems for things such as food purchases, payment transfers and banking. There is a big amount of wealth that is focused on an older population, which is slower to move to mobile.

Thus, Mobile Commerce is considered as the main and biggest driver of the growth for the mobile app economy that is growing from $344 per user to $946 by 2021. As per the reports, Asia will expand instantly from $3.2 trillion in 2021, followed by the Americans hitting $1.7 trillion, the Middle East, Africa and Europe will reach $1.0 trillion.

Why Mobile App Economy is Predicted to Worth $6.3 trillion by 2021?

A lot of entrepreneurs might be thinking that what makes app economy to expand by 2021. Why app economy is going to increase and what are the reasons that it will explode in the future.

Augmented Reality and Apple’s ARkit can be two biggest reasons behind increasing app economy. As the demand for AR technology is likely to increase significantly. According to Goldman Sachs, the Augmented Reality market and its sister technology Virtual Reality will reach $80billion by 2025, so it is obvious that it will largely impact on the app economy.

Recently, Apple also introduced its most powerful and cutting-edge platform ‘ARKit’ that allows developing augmented reality apps for iOS devices, including iPhone and iPad. The company introduced this high-end framework to harness advanced capabilities of AR for scene understanding and positional tracking.

Augmented Reality and Apple’s ARKit have impacted on various industries, including

Recently, Statista also estimated the economic impact of Augmented and Virtual Reality technologies worldwide from 2016 to 2020. 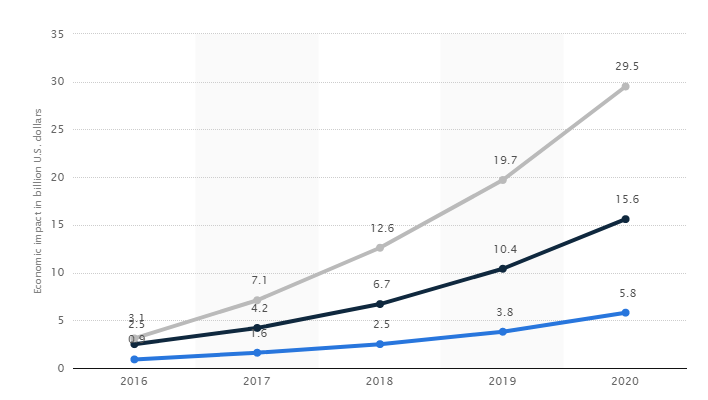 These high-end technologies can directly impact on the app economy and will increase the demand for app development. And this is the reason why lots of investors prefer to invest in mobile application as it will lead to success in the future.

In case, if you have any question regarding Apple’s ARKit and Augmented Reality apps development, you can get in touch with our mobile app developers, who have already started working on these technologies.

Still Have Any Confusion? Get in Touch With Our Developers

4 Features to Consider to Develop Intermittent Fasting App Like Zero

Want To Create An App Like Tinder For Teenagers? Don’t Miss To Integrate These 4 Features