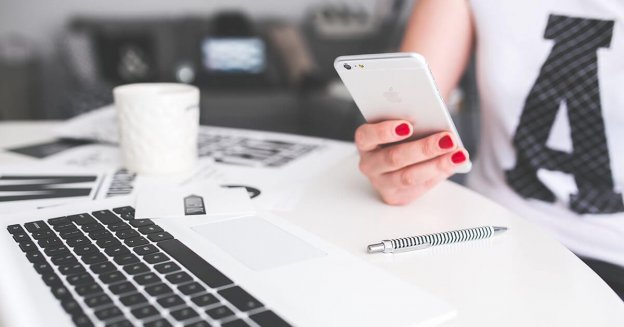 This post lies information for those startups or mobile app entrepreneurs, who have made up their mind to develop an app. Check out this post to know which are those top categories, that are exceptionally doing good across the App stores.

It is seeing a strong growth in app store download in the Apple App Store and Google Play, which are both the major platforms to download any mobile app. Well, the year 2018 started with the strongest quarter that mobile app economy has ever seen! This is due to the fact that, according to the latest report from TechCrunch, “Global app store records again broke records in Q1 (first quarter) 2018”.

Below, we’ve compiled data of Q1 2017 and Q1 2018, where you can check the growth of the worldwide gross consumer spend iOS and Google Play combined. Let’s check out what it is all about:

If we compare the consumer spending on Apple App Store and Google Play, it grew by 22% year-over-year to reach $18.4 billion, which is a record number. This is what you can check in the below graph. The growth has risen up in the year 2018 as compared to the previous year i.e. 2017. 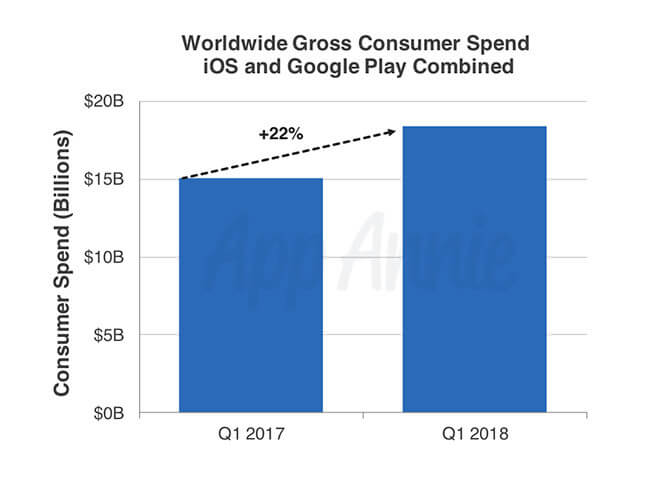 When it comes to app store download on Google Play and iOS, the Q1 2018 was a record-breaking quarter. 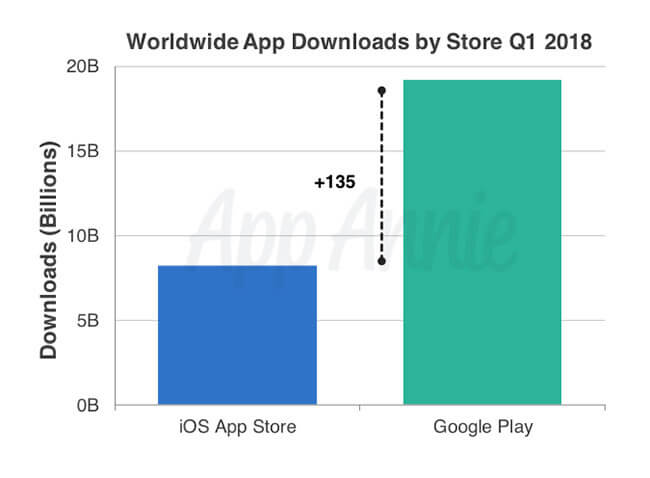 Side Note: “Quarter over the quarter (Q/Q) is a measure of an investment or the company’s growth from one quarter to the next (e.g. Q1 to Q2). Quarter-over-quarter growth is most commonly used to compare the growth in profits and revenue”. 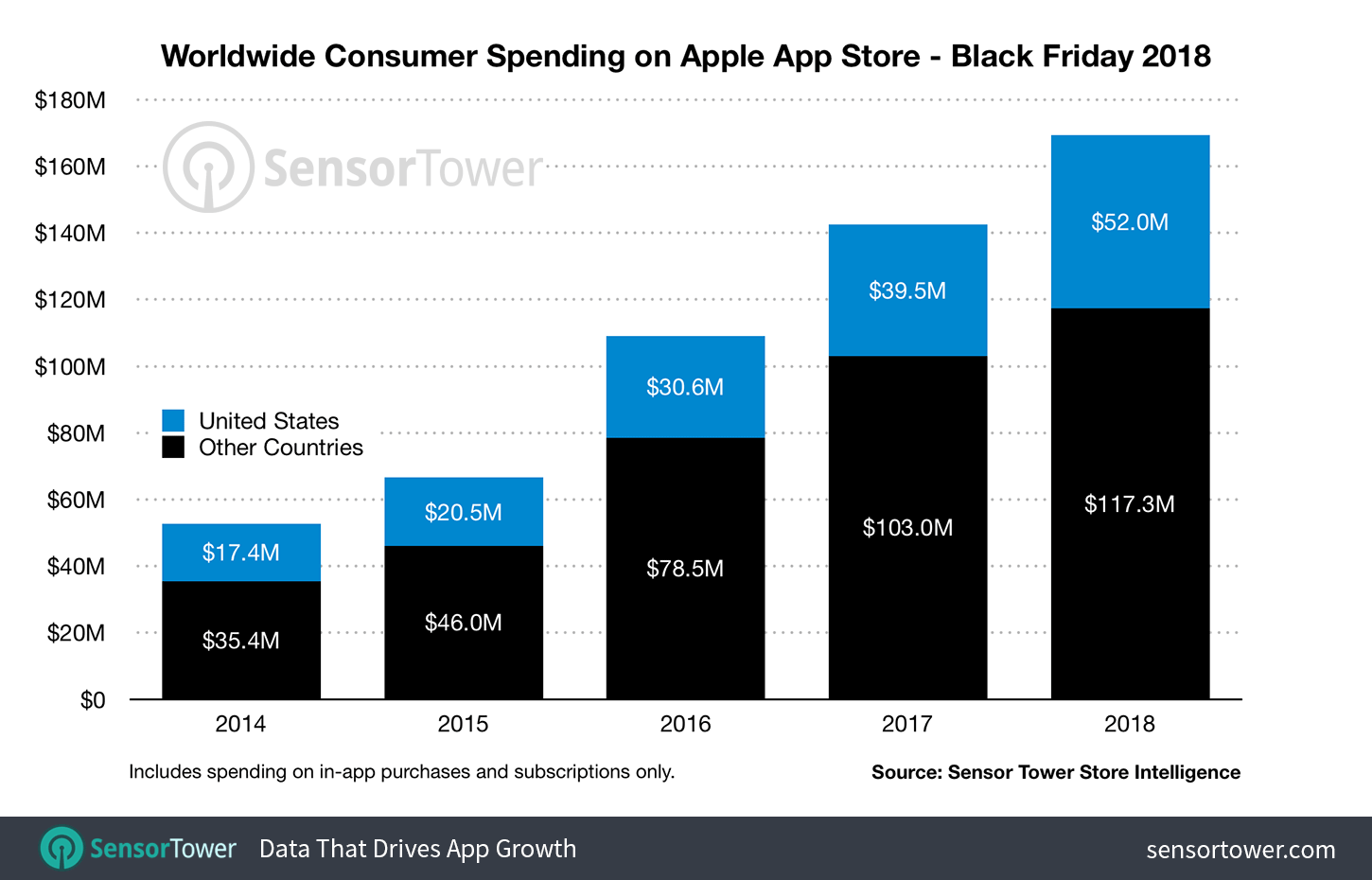 According to the latest report from sensortower.com, U.S. consumers spent an estimated $54.2 million on Apple’s App Store this Christmas. The report shows a 31% year-over-year increase in spending as compared to Christmas 2017.

Which are the Leading Countries?

On the other hand, when it comes to Google Play downloads, specifically, India, Indonesia, and Brazil saw the largest market share growth. 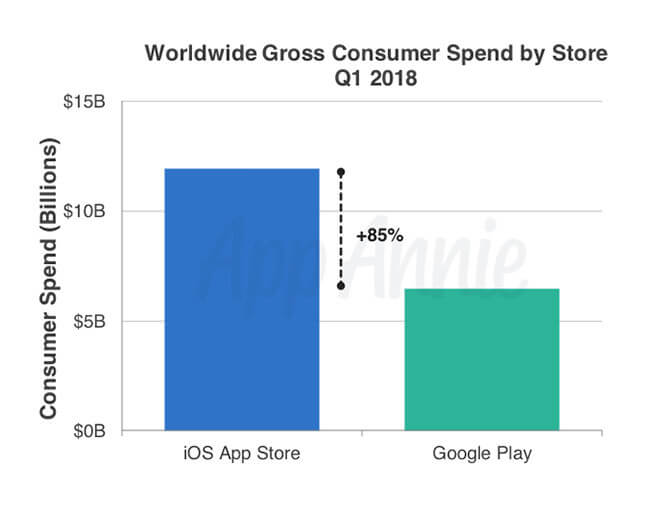 With over 6.2 million mobile apps available across both iOS and Google Play at the end of Q1 2018, it is clear that mobile apps touch nearly every aspect of the consumers’ lives. The average smartphone user spends nearly 3 hours a day on apps and accesses close to 40 apps per month. Furthermore, the ride-sharing app is on the top in the m-commerce or mobile commerce app category.

The revenue earned in the mobile app economy is quite large. M-commerce category is the part of it as it includes the revenue flowing through – third-party Android stores, m-commerce (for instance, ride-sharing) and in-app advertising.

The mobile app economy is extremely healthy. Thanks to the boom of ride-sharing apps. The extremely successful China-based bike-sharing apps like Ofo and Mobike are expanding rapidly across the globe. So, there is no room for doubt that China has become the world’s largest app market. However, in the year 2017, China was also at the top across the globe. 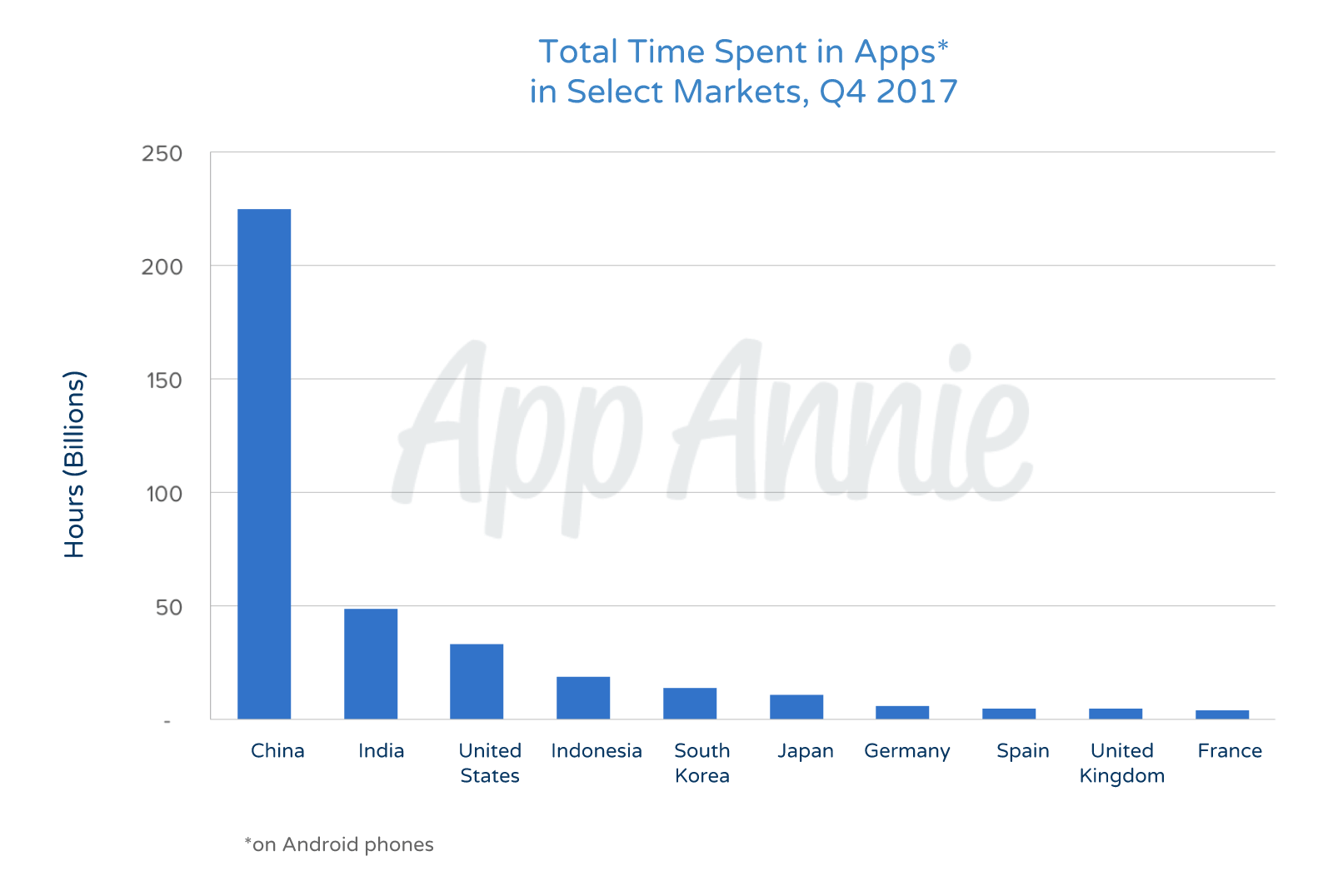 The mobile app market has already matured, and there’s not a single sign of slowing down. However, all credit goes to ride-sharing apps like Uber.

With the global ride-sharing revenue was $45 billion in the year 2017, the market remained highly lucrative and extremely competitive. Globally, the ride-sharing market is booming. Additionally, the ride-sharing services are increasingly expanding their revenue opportunities into areas such as food delivery, package delivery, and even financial services (e.g. Uber and Grab companies payment services). So, According to the report from Statista:

Across all categories, music & audio and entertainment mobile app is the second largest category which has the largest market share growth of global consumer spend on Google Play as both quarter-over-quarter and year-over-year. It speaks the larger trend of consumers opting for sign-up and pays for music streaming and video subscriptions, which are the top grossing apps. The experience is quick, frictionless and secure that is the inherent benefit that mobile apps provide over other channels in addition to their ability to allow users to consume content virtuality everywhere.

The ‘live streaming’ mobile app category is also booming. For instance, social media live streaming services like Facebook Live and Periscope allow to post informational videos as the way to provide help and content to potential users at low cost. Therefore, to promote user-generated content does not only enhance the users’ experience but also provides a more personal experience with a large target group.

The below graph illustrates the percentage of global internet users who have watched live a stream via Facebook, Instagram or Twitter in 2017. According to the report from Statista, “There has been a steady increase in the share of live-streaming audiences on all social media platforms from 20% reported in Q3 2016 to 28% in the Q2 2017. This is what you can see in the below graph. 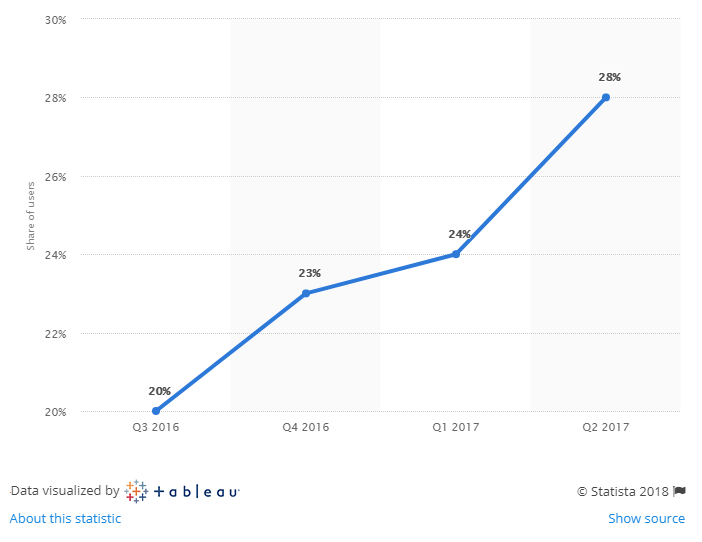 The next category is Health and Fitness apps that experienced huge quarter-over-quarter growth as well as a behavioral shift from consumers to the subscriber the health and fitness top grossing apps. The United States, United Kingdom, and Germany have experienced the largest market share growth in iOS consumer spend both year-over-year and quarter-over-quarter. However, the performance of these countries illustrates that these countries demonstrate that the app market has already matured. However, consumers are increasingly willing to pay for the growing benefits that they receive from apps.

Additionally, the mobile app economy had a record in 2017 and has continued the strong momentum on Google Play and iOS into Q1 2018. You will be surprised to know that the consumers continue to embrace mobile throughout 2018.

Furthermore, according to the report from Flurry, “Mobile Health and Fitness App Sessions grew 9% year-over-year”.

Have You Planned for Mobile App Development Under These Categories?

If you have made up your mind to create a mobile app with user-centered design methodologies, then you as an early-stage startup can go with these above-mentioned leading categories. This is due to the fact that the categories, including ride-sharing apps like Uber, live streaming apps, and health and fitness apps have experienced huge growth in the mobile app economy. However, you might have some questions regarding mobile application development in your mind like:

You might be having plenty of such questions in your mind, then you can directly consult us as we are a leading mobile app development company and have developed more than 2500 mobile apps under different categories.

In case, if you still have any query or confusion related to your new mobile app ideas price for app development, you can get in touch with us through the below-given form. Our sales representative will get back to you within 48hrs.

3 Lessons Learned from Hopper (Montréal-based Travel App) That Has Raised $100M in Funding, Valued at $780M

How to Get More Downloads and Make Your App Popular After Launch? 5 Quick Hacks

How Enterprises can Leverage Top Mobile Trends in 2014 for Mobility Solutions?