This News Will Boost Your Day If You Want to Start Your Own Startup in The U.S. or Canada

This blog is for those startups who are waiting for the “right time” to develop an app. However, this post will change your mind. We have rounded up top mobile app categories which are at the leading in the first quarter (Q1) of 2018.

Before being an entrepreneur, startups need to go a long way. To keep a small business in startup mode that requires you to stand on the brake. If you keep thinking what’s the right time to start a startup, then you never find the right time to start with! However, we’re going to share you the latest news, which would push you towards your goals in order to achieve them.

The drastic rise was driven by increased investment as Seed, Early-stage, and Late-stage, with round counts also up significantly from the prior quarter. It is upward trajectory, specifically at the Seed stage that could uplift concerns in the recent months about a decline in rounds for the very earliest stage startups. While seed deal counts remain well below peaks hit a couple of years ago, and projections show they are no longer falling.

So, it is time to move from thinking mode to initiate mode, and you can also embark on your top ideas on startup companies. Before an angel investor or venture capital firm invest in a startup, your startup needs to prove its ability. Startups need to prepare themselves in which app category they should start with.

Before jumping to the main section of our post, let’s check out the glossary of terms, which we will use in the post more frequently. Herein we’ll cover about venture, venture capital, and the venture capital investment stages.

Venture: It is a global business with a growing percentage of financing taking place outside Silicon Valley as an expanding array of innovation hubs, which compete for capital.

Venture Capital: It is financing that investors provide to startup companies and small business that is believed to have long-term growth potential. It generally comes from well-off investors, investment banks and any other financial institutions. However, it does not always take just a monetary form, but it can be provided in the form of technical or managerial expertise.

1. Seed/Angel: It includes financings, which are classified as a Seed or Angel including accelerator fundings and equity crowdfunding below $5 million.

2. Early-Stage Venture: It includes financings that are classified as a Series A or B, venture rounds without a designated series that are below $15 million, and equity crowdfunding above $5 million.

3. Late-Stage Venture: It includes financings, which are classified as a Series C+ and venture rounds, which is greater than $15 million.

If we’re talking about the investment totals, the two words: “Up” and “Rising” are one of the best-suited words to explain it. The total investment across all venture stages was up both sequentially and year-over-year (YOY). Technology growth is the only stage which saw a small decline, and it is typically volatile from quarter-to-quarter because of the small number of deals and large dollar sums involved. This is what you can check in the below image. Also, you can see how the numbers compare over the last five quarters i.e. Q1’17, Q2’17, Q3’17, Q4’17 & Q1’18. 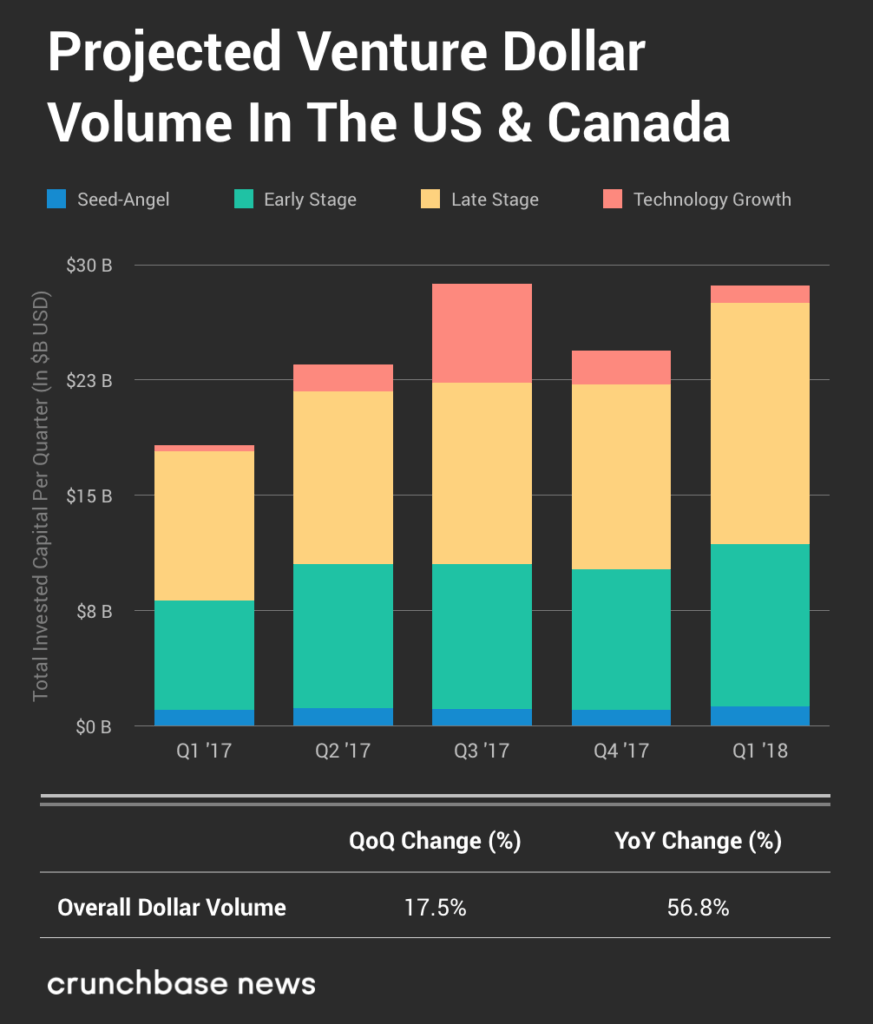 Herein, we’ve broken up into the numbers in greater detail, focusing on Q1 investment and round totals, stage by stage performance, largest rounds, and biggest exits.

The latter part of 2017, there was a drop off in the number of Seed-stage financings. However, the decline was a source of worry across all startup ecosystem as investors depend upon on a healthy pipeline of SEED-funded companies for later venture funds. Talking about Q1’18, the numbers do not put all fears to rest as they do offer a bit of comfort. It covered over 1500 companies in the U.S. and Canada that raised SEED or Angel funding in the first three months of this year, and up about 28% from Q4 2017. In the below image, we can look at the Seed-stage investments and round counts for the past five quarters. 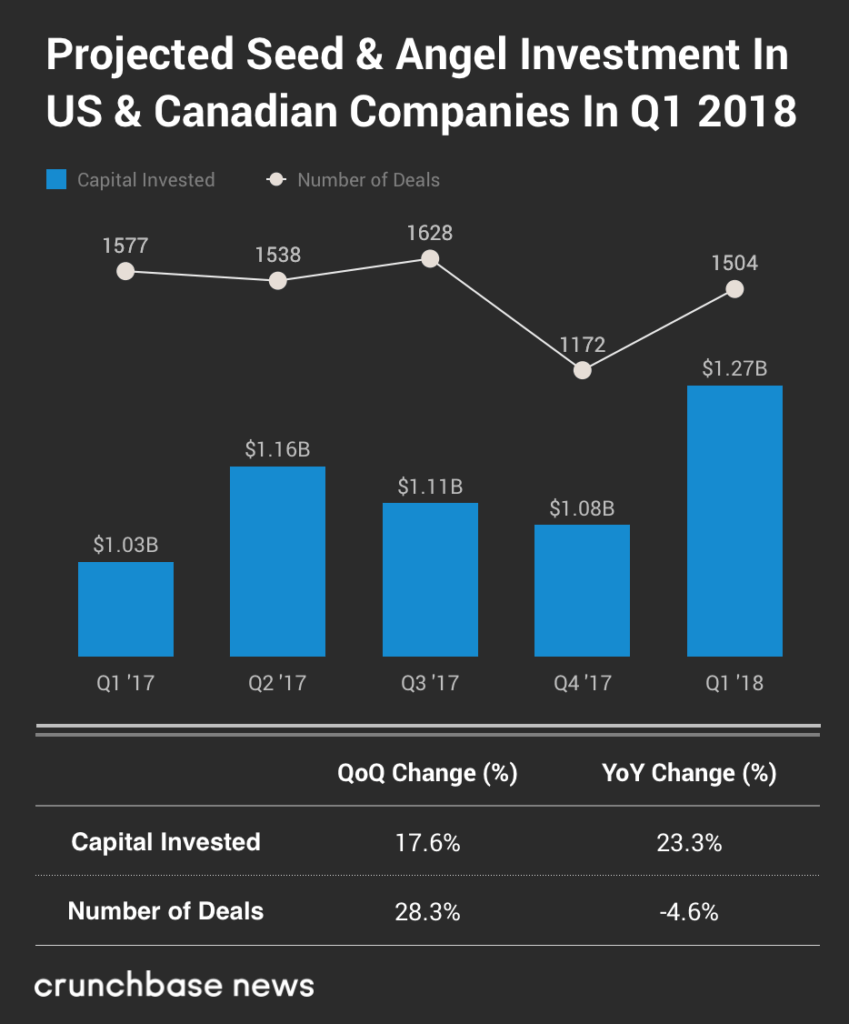 Early-stage funding includes Series A and B increased in Q1, with startups collecting in a projected total of $10.54 billion by far the highest total in five quarters. In the below image, you can see how much money has gone into early-stage since 2017. 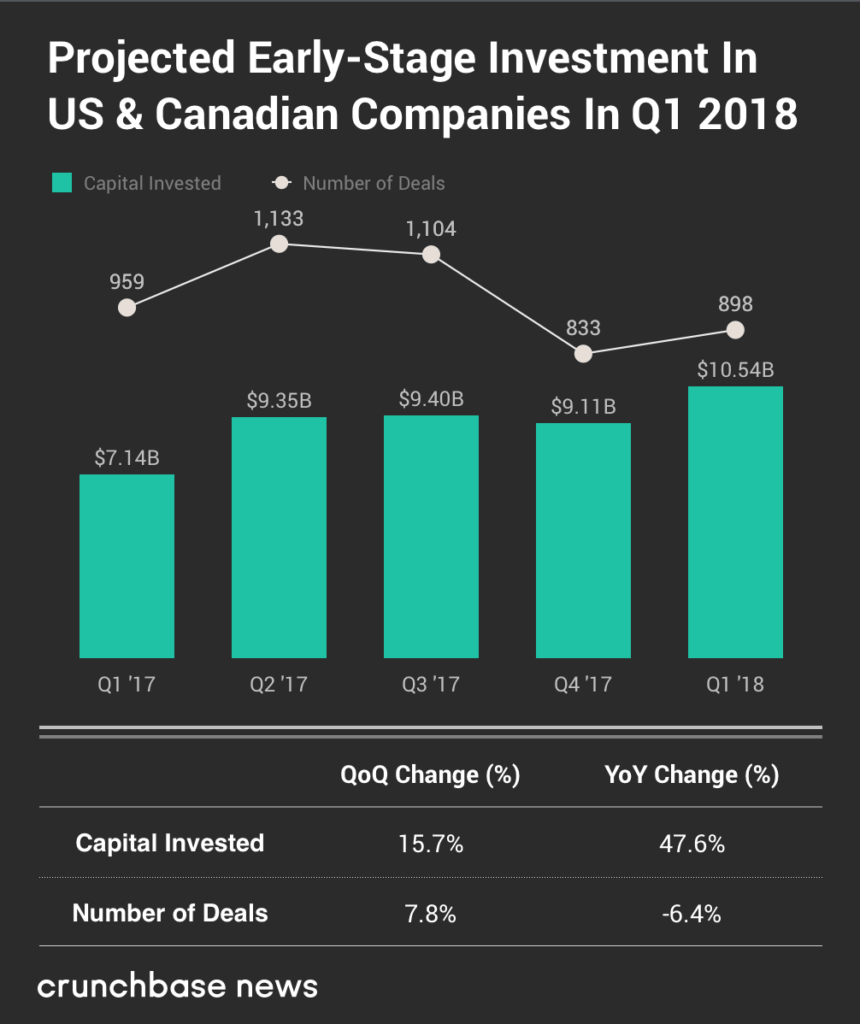 If we’re talking about Q1, the quarter-over-quarter rise was driven by both bigger rounds. Entirely, 898 Series A and B rounds closed in the first quarter (Q1) in 2018. An early-stage round does not always mean immature technology. It is worth noting that some of these big early-stage bio rounds went to startups with fairly mature technologies and product pipelines, which were licensed or spun out of larger companies.

The Late Stage experienced the biggest gains. Investors put $15.7 billion into late-stage rounds (Series A and beyond) over the first three months of the year, by far the highest total in five quarters. In the below image, you can see how much capital has gone into late-stage startups in the first quarter (Q1) of this year pulled in more than 30% capital than any quarter in 2017. 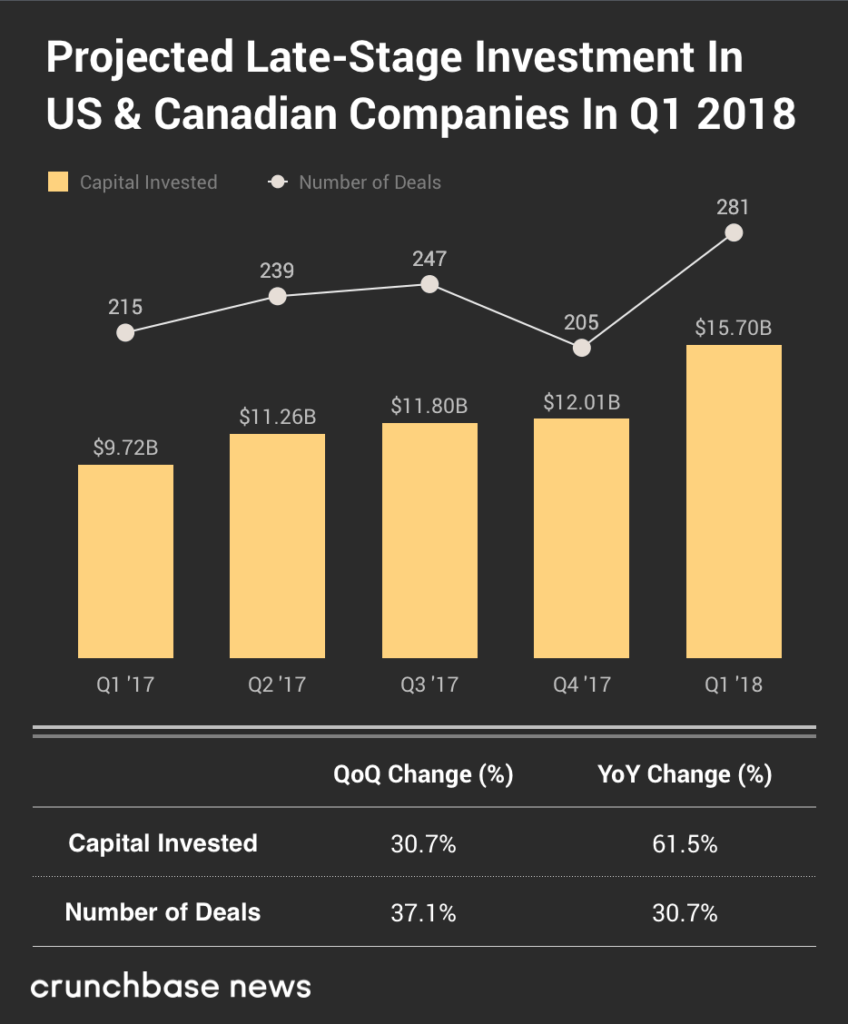 The key factor behind the late stage rise can be mounting piles of cash in the hands of large venture firms. However, the U.S. venture firms have embarked on a supergiant fundraising spree. So far this year, at least six have disclosed new funds targeted at upwards of $1 billion. The leading companies in this category are Katerra, DoorDash, Moderna Therapeutics and Robinhood.

After a comparatively sluggish Q4, the round counts are on the upswing. Over 2700 startups closed funding rounds in Q1, as per the report. It is a nice rebound from Q4 of 2017 that saw a steep drop in the number of financings, specifically at SEED and Early Stage. However, it is still below average for the past five quarters that you can see in the below image: 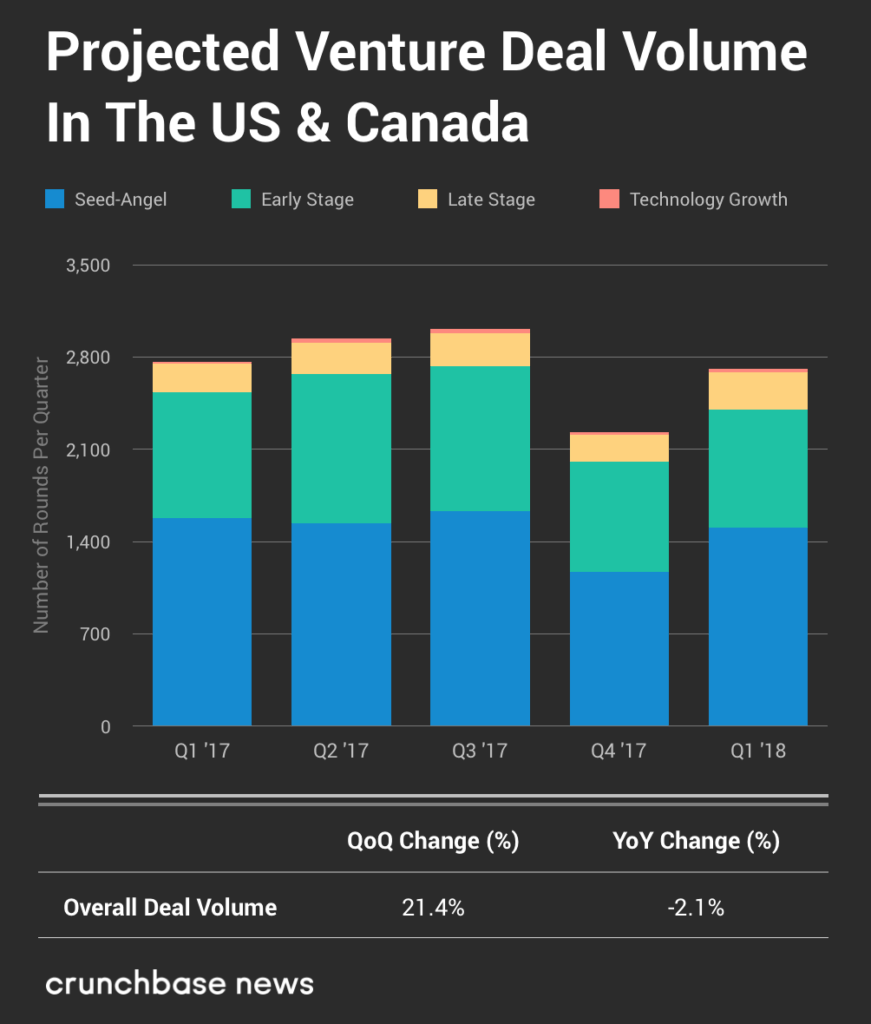 Top App Categories That Have Been Flourishing So Far

It seems that the healthcare app category is showing no sign of slowing down. However, the startup companies have raised a huge amount of fund in the medicinal and healthcare niche. In short, we can say that this niche has also bright chance to grow in the upcoming years. A few names of startups which are already positioned well: Moderna Therapeutics (raised $500 million in late-stage), Viela Bio (a developer of therapies for autoimmune diseases), and Helix (health startup company that focus on personal genomics and connects consumers with insights into their own DNA.

Apart from raising fund of apps, the size of global health market is expected to increase to over 200 billion U.S. dollars by 2020. Additionally, the mobile health segment is expected to generate the second largest revenue share, and reaching 46 billion U.S. dollars by 2020. It is clear that the global health market in the upcoming years will be flourishing. Being a startup, you can embark on this category.

You might have heard a lot of new updates about the growth of this app category that is music streaming. It may have already seen that the first big internet IPO (Initial Public Offerings) of the second quarter with Spotify (music streaming app) with the total funding amount $2.7 billion. The stats of 2017 looks like something this: 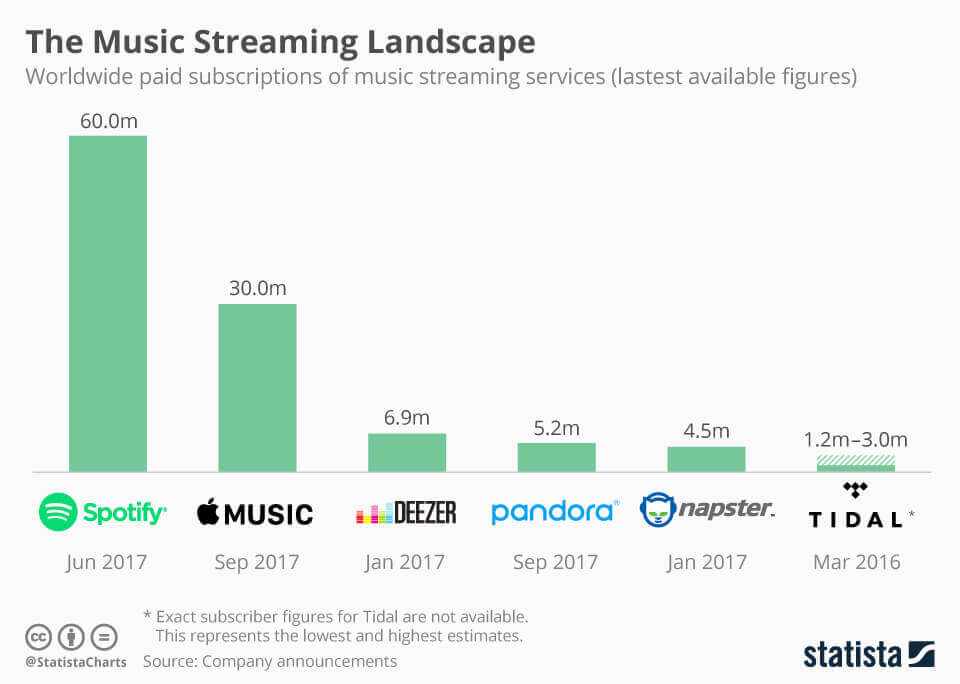 This is one of such mobile app categories, which is also booming in the market. In a nutshell, the music streaming app category is also rising rapidly.

There is no need of a crystal ball to predict that the IPOs (Initial Public Offerings) will be big in the second quarter (Q2) in 2018. After going through the above-given graphs of growth from Q4’17 to Q1’18, there is no room for doubt that Q2 of 2018 will be growing with all these app categories. Apart from above app categories, there are some software startup firms like Zuora, Pivotal, and Smartsheet, which are also flourishing in this first quarter of 2018. Overall, Q1’18 is dedicated to startup companies, and because of them, the graph is growing upward.

Being a startup, if you might have questions related to creating an app in the above-mentioned categories like health care, music streaming, personal finance or on-demand food delivery, then you can directly consult us through below-given form as we’re a leading iOS app development company and have experience of developing more than 2000 mobile apps under different categories.

Travel Planner App: Here are 4 of the Best Features to Include While Developing a Trip Planning App