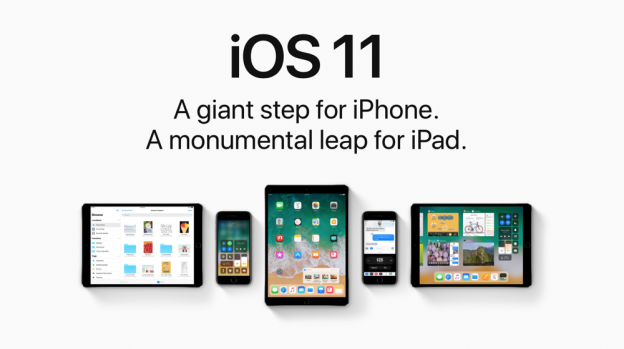 Finally, the wait is over as Apple previewed iOS 11, a biggest update to the most powerful and advanced mobile operating system, offering hundreds of new features and rich experience to iPhone and iPad this fall.

At the 2017 Worldwide Developers Conference in San Jose, Apple declared updates to watchOS, tvOS, macOS and iOS. Last year, iOS 10 was a huge step forward for Apple mobile devices, but this year the all new iOS 11 offers a range of improvements to take your iPhone and iPad experiences to the next level.

However, iOS developers can download a preview of iOS 11 through developer.apple.com. Later this month, there will be a public beta program obtainable at beta.apple.com. While the public release of iOS 11 will be obtainable in the fall for the iPhone 5s and later, all iPad Airs, all iPad Pros, the iPad mini 2 and later, the iPad 5th generation and the iPad mini 2 and later and the iPod touch 6th generation.

There are many new features like sweeping new upgrades to Siri, a redesigned Control Center and App Store, and a brand-new Apple Pay feature, allowing you to send or receive money to your contacts through iMessage.

Last year, Apple launched iMessage apps in iOS 10, but the experience of using them was little cluttered. This year, in iOS 11, Apple has designed the iMessage application Drawer so that users can easily find new apps, navigate between apps and access their go-to’s.

Along with this, another important feature is that your messages will be heading to iCloud for giving better syncing. With this, all your conversations will be transferred automatically whenever you sign in to a new iOS device. It will also give an ability to concurrently delete awkward messages across multiple devices. It will also solve the problem of getting same notification across all your devices.

Currently, you are able to use Apple Pay at particular stores, online web stores through Safari and in certain iPhone applications. Apple says that approximately 50% of U.S. retailers will support Apple Pay by the end of this year.

The all new iOS 11 allows users to use Apple Pay to send or receive money from their contracts through Messages. It means the new iMessage app turn Apple Pay into your new Venmo or Square Cash alternative. The money that you will receive can be collected in your Wallet application in the form of a Cash card.

Also Read: Apple Pay Cash – All You Need to Know About It & Its Features

The collected funds can be used to complete other Apple Pay transactions or it would be also possible to transfer that cash to your bank account. The all new Apple Pay’s peer-to-peer transactions will be obtainable in iOS 11 and watchOS 4.

As we all know that Siri is one of the most popular personal assistant across the world with 375+ million active devices accessing Siri each month across 36 countries. Utilizing the latest advancements and improvements in machine learning and artificial intelligence, new voices of male and female are more natural, adjusting intonation, emphasis and tempo while speaking.

It can also translate English words and phrases into Italian, Spanish, French, Chinese and German. Now, it goes beyond voice as it becomes more analytical across different iOS applications. For instance, if you are searching for Disney Land in Safari, Siri will provide latest articles related to Disney Land in the News app.

In case, if you get any text message asking for money, Siri will also suggest iMessage’s Apple Pay integrate, asking for the same amount that has been requested. Moreover, you can also use Siri to add to your Evernote or pull up a QR code in WeChat.

Augmented Reality for iPhone and iPad

Entire year, Tim Cook had talked about Augmented Reality like how excited he is for this technology. Finally, Apple has introduced ARKit, a new platform for developers, helping them to bring advanced quality AR experiences to iPhone and iPad using the built-in camera, processors and motion sensors in iOS devices.

This new platform will make it easy for iOS app developers to tap into the top computer vision technologies to develop compelling virtual content on actual-world scenes for rich and interactive gaming experience and immersive purchasing and industrial design.

With the all new iOS 11, users can get a great experience while clicking pictures as portrait mode images can be taken with optical image stabilization, HDR and True Tone Flash, so every single shot gives a more professional look. Apple has also introduced HEVC – a format, which is up to 2 times better, compression-wise for camera-captured videos so that you use less space on your device.

You can also save even more space as iOS 11 is coming up with the replacement to the JPEG called HEIF that is just half of size with the twice quality. Moreover, photographs that clicked in low-light will have improved image quality, true tone flash, improved low-light performance, depth API, HDR and optical image stabilization.

Since Apple App Store has launched, Apple has paid $70 billion to developers. Currently, the applications that are submitted to the Apple App Store are reviewed within 24 hours. Now, the App Store is getting its most vital redesign since its launch approximately a decade ago. In the App Store, users can get following benefit of following features:

Today, a new tab, will be located at the bottom of your screen and features a new application every day (with information about developers, who have developed them). In this new tab, the app store will feature a new application of the dame, game of the day and a daily list, focusing on a theme or a goal like meditation.

The App tab will mainly focus on just applications, so users do not have to bother about different games to get scrambled into the search.

The all new Games tab that will list different games according to their rankings and popularity. Now, you can easily browse different games by their categories, watch videos on gameplay and scroll through ratings as well.

Apple has also introduced new iOS 11 features that are mainly designed for iPad. There will be a new app dock, which looks like one in macOS. You are allowed to tap on any of these apps and easily drag them to the right side of your screen so that you can open them as slide over. You are allowed to lock slide over into Split View so that you can use both applications concurrently.

There is new app-switcher that supports drag and drop, making it a lot easier to transfer files, images, text and URLs. Apple has introduced Files that is a new iOS application mainly envisioned to make the iPad experience more like a traditional Mac. It displays your documents stored in iCloud, Google Drive, Dropbox and other file-storage applications.

With iOS 11, Control Center has got a complete renovation with all-in-one look to put quick controls at your fingertips – without having to swipe between menus. Now, everything is combined like system controls, app shortcuts and music controls.

All you need to do is pull-up from the bottom of the screen and here they are. It is completely different than before; therefore, the design will compel you to use the new arrangement. However, it will be a lot easier once it becomes second nature.

How iOS 11 Will Affect the iOS App Development?

At the WWDC 2017, Apple demonstrated the new AR experiences to iPhone and iPad and launched various tools that will help millions of skilled and talented developers bring various new advanced features and experiences to more than one billion active Apple devices.

As Apple launched CoreML framework that will make it easy for developers to build smarter apps with machine learning that become more intelligent now. This all new framework for machine learning enables all processing to happen locally on-device with the help of Apple’s custom silicon and tight integration of hardware.

Moreover, the new SiriKit gives developers an ability to integrate Siri into their applications and make it more convenient for their users. As discussed, Siri has been expanded to support various categories like notes, reminders, to-do lists and banking for money transfers, etc. Now, developers can use this advancement in the mobile app development of varied categories and deliver a rich experience.

Furthermore, developers can also make use of MusicKit feature and integrate it into their applications to deliver access to more than 40 million songs, featured content, etc. So, music lovers can expect some of the exceptional apps from developers and enjoy music to the different level.

Should You Update Your App for iOS 11?

Moreover, with iOS 11, Apple officially drops support for 32-bit apps, so any 32-bit app will refuse to launch and instead, it will show an alert that reads “The developer of this app needs to update it to work with iOS 11”.

So, 32-bit apps won’t obtainable on the app store for the devices that have been updated to iOS 11. If you will not update your 32-bit application to 64-bit, the chances are high that you may lose maximum user base.