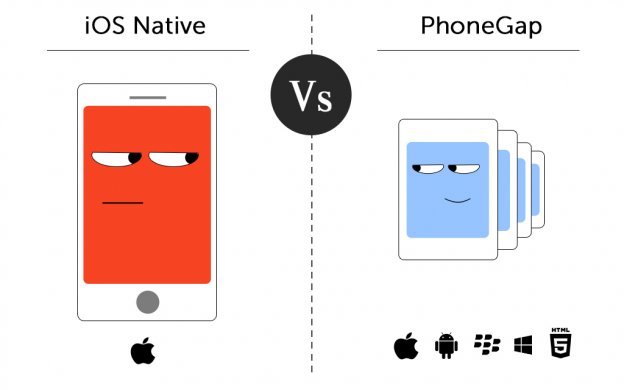 Before you decide on whether you should choose iOS native app development or a hybrid PhoneGap app, let’s put forth the pros and cons of both and make it simpler for you to decide which one is the best for you.

As the native apps are developed using the APIs offered by the device OS itself, the capabilities of the apps are based upon the device OS they are built for. Hence, these apps can make use of all the possible features of the device. The programmers can easily control the level of user experience. They do not need to compromise on any other important aspects such as battery drain, performance, etc. It’s easier to perform code enhancements also for such native apps.

Being a free Open Source framework, PhoneGap enables hiding hybrid apps that work on most of the popular mobile platforms such as iOS, Android, Windows and Blackberry. PhoneGap framework is used by multiple mobile app development platforms too. If you’re looking for a web-based app that has minimal dependencies on the native capabilities, PhoneGap framework can be the right option.

However, there are some concerns that need to be addressed for PhoneGap framework. Some of them are:

In the battle of PhoneGap vs native code, you should really use native if performance requires it. So, really, you should go native for games and hardware intensive apps. However, if your app is primarily an information app (or social media or Other Apps) without a lot of intensive use of hardware, PhoneGap would be an ideal choice.

The Rise of iOS and Swift – Will It Rule the Enterprise App Development?

Quick Answers To Your Questions About iPhone App Development