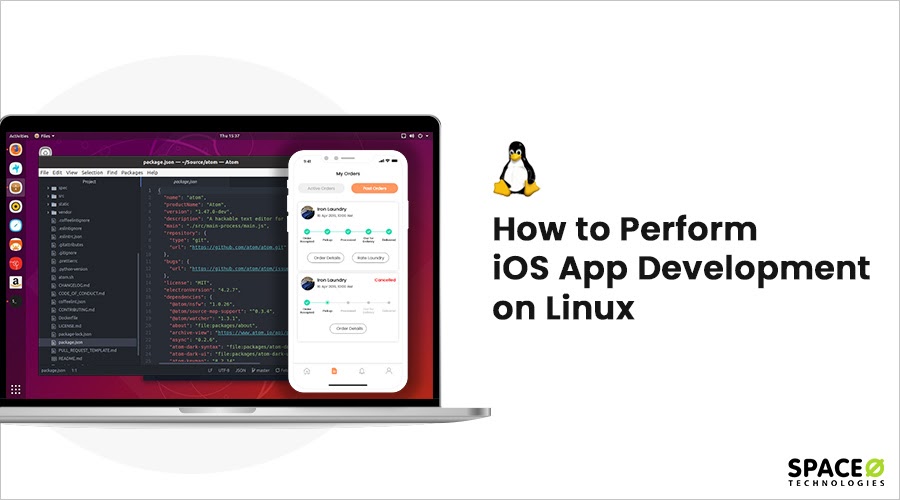 Developing iOS apps on Mac is an effortless task because you have Xcode (official IDE of Apple) to work with. But is it possible to develop an entire application from scratch in a Linux environment without Xcode?

Being an iOS developer, you know that using Xcode (IDE), you will be able to develop iOS mobile apps. However, Xcode only runs on a Mac computer. Thus, you need different ways to develop iOS applications on Linux.

For developing an iOS app on Linux, you need virtualization software.

But, how to use virtual access to virtual Mac OS? Here are the two virtual machines for you to choose from.

With a virtual machine, you can run Windows on Linux operating systems (Linux OS) and even Windows on a Mac operating system. One of the significant benefits of virtualization software is that it helps running multiple OS side-by-side, which is beneficial to build cross-platform apps.

Planning to Develop an iOS App?

Here are three ways with which you can develop iOS apps on Linux.

If you are not planning to own a Mac computer physically and still want to develop iOS apps, is there any alternative?

You can rent a Mac online. But how to do that?

Here are the 2 companies which allow you to rent a Mac in the cloud in exchange for certain fees.

Additionally, you get to choose from different Mac products like Mac Pro and Mac mini.

Now, you can connect with a cloud-based Mac using a remote desktop connection. Linux offers Rdesktop remote desktop protocol for Linux operating systems. You can use this to access MacinCloud servers.

Also, MacStadium offers different solutions for you according to your business type. They have 3 plans based on your business size.

Picking the right cross-platform development tool is essential for building function-rich apps like Wikipedia and TripCase. As a result, businesses have started to develop their open-source library to allow developers to code iOS and Android using different platforms like React Native and Xamarian.

We have listed down the platforms and programming languages used to develop iOS and Android app development.

Let us discuss the cross-platform tools in detail and know how they can help you to smoothen your iOS app development process.

Using these cross-platform tools, you can develop apps in your preferred language and learn iOS and Android. You need to understand the basics of programming languages like Javascript, C#, Swift, and HTML5. Understanding the iOS and Android ecosystems is the added advantage for building powerful hybrid and native apps.

But, do Apple’s latest features work in cross-platform frameworks?

In case if you are planning to develop cross-platform applications, then following the above steps will help you.

Using a virtual machine, you can run macOS inside your Linux operating system.

You can use VirtualBox since its installation process is smoother, and you can quickly get it up and running for macOS in no time.

Inside the virtual machine, it will look exactly like the Mac environment. You can install and set up Xcode, set up iPad and iPhone simulators, and work with it. However, it may require virtual ports for the minimum configurations to perform testing on real iOS devices.

If you are ready to do little leg work, this option is the best solution for iPhone development. After this setting up everything, it will be easier for you to turn on and off your MacOS for app development.

Have a Mobile App Idea?

Share your idea with our iOS app developers who have developed more than 1000 iOS applications.

FAQs About iOS Development on Linux

How much time does it take to build iOS and Android apps?

The mobile app development time (iOS and Android app) can range between 2 – 6 months, depending on various factors. These factors are:

What is an iOS Simulator?

During the development process, an iOS simulator will help you to quickly prototype and test build your application. iOS simulator is a part of Xcode tools and will be installed accordingly.

We hope you have understood the 3 ways to develop iOS applications on Linux environments. Initially, it might become quite challenging to set up and build an iOS app on Linux.

In case of any questions, our iOS app development team will consult and help you to find a solution.