The Quiz Competition Fires Up The Competitive Spirit in Space-O

Counting the fans of Space-O, reading up 1000 paged book on iOS & Android versions and their functionalities, googling the term ‘design’ more than usual, checking websites for website based information, socializing more than usual to share and gain knowledge; because the quiz was getting closer and closer.

The preparations for the Space-O Quiz Competition had been up and about since the latter half of August. The main task since then had been spread across two fields; the preparation of questions and gearing up for the plausible answers. But on the D Day all the hard work was about to be tested.

All the teams across all platforms were gathering in together to huddle up before the quiz actually started, when an unexpected voice greeted them. The voice belonged to a slow paced, patient yet testing ‘Samay’ (time itself.) Unexpectedly though, Samay was a girl (it has changed gender due to the era of women empowerment) who wanted to wish luck to all the participants and bid them farewell, but not before warning them about remembering the power of Samay, during the time of test.

The ‘Quiz Masters’ for the afternoon were the CTO of Space-O, Mr. Atit Purani and a senior Project manager, Mr. Chintan Modani. Mr. Narendra Purohit, the project delivery head at Space-O, was the ‘Scorer’ (as people generally expect him to be particular with numbers, after all he is the delivery head).

The ‘Taskmasters’ for the Quiz were Ms. Mansi Trivedi, Ms. Nehal Jani and Ms. Kaushiki Kumari, who possessed Hawk eyes to find every little bit of mistake that happened on the floor, just like their routine day HR job. 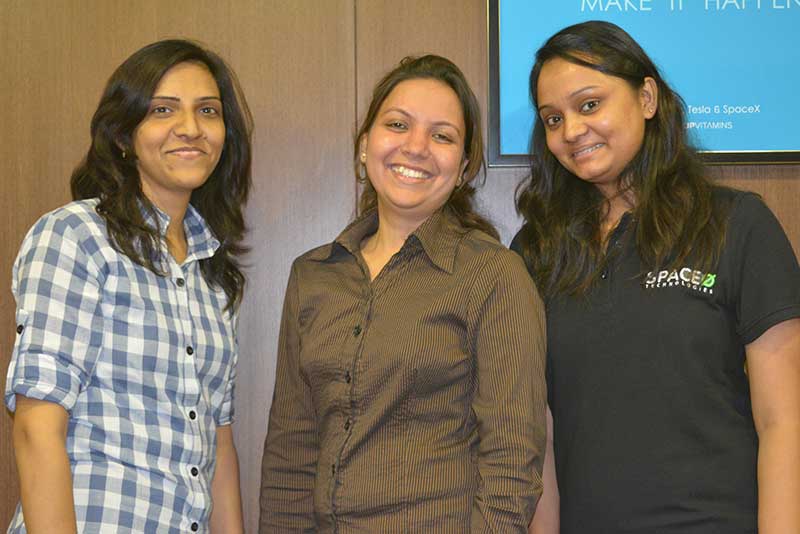 The rules for the quiz were simple. 2-3 teams from all the technical departments at Space-O (iOS, Android, Web and Design) would l compete against each other, making 1 team the winner that moves forth. Every intra departmental quiz had 3 rounds each, at the end of which they had to be the team scoring more points than the others to move to the grand finale.

The intra departmental quiz focused on the technical questions, related to the technology that the team members dealt in, including 3 rounds like a common, one to one question-answer round; a buzzer round and a challange round. In case of the buzzer round and the challenge round, minus markings were included, which made it even tougher for the teams to be victorious, while also testing their speed in giving the right responses, in a tricky situation. Every team got a plus 5 for a right answer and -2 for a wrong answer.

The teams that participated (departmentally) were: 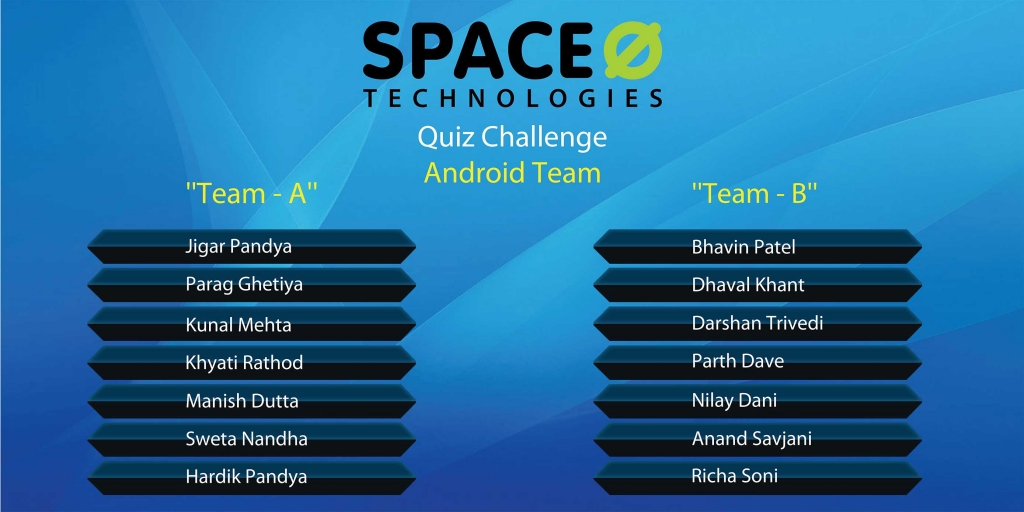 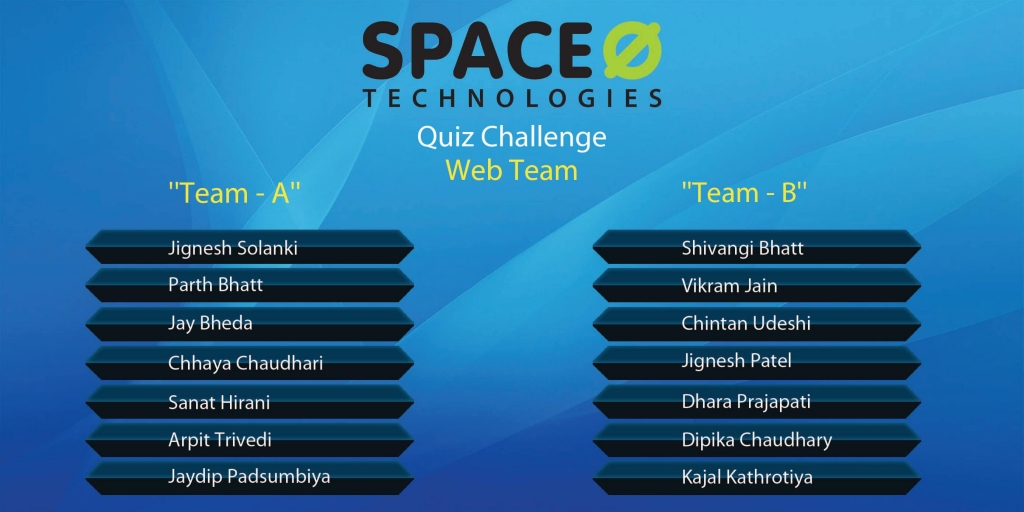 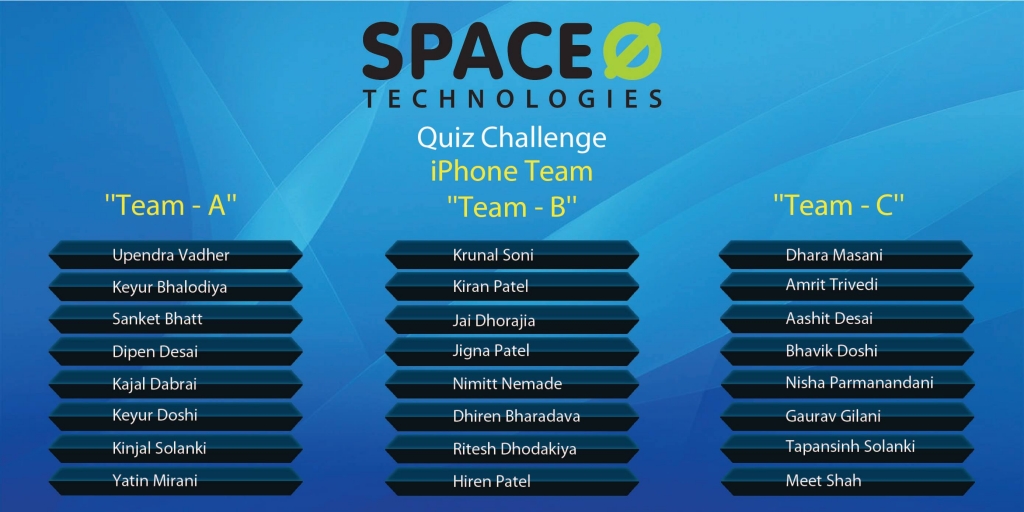 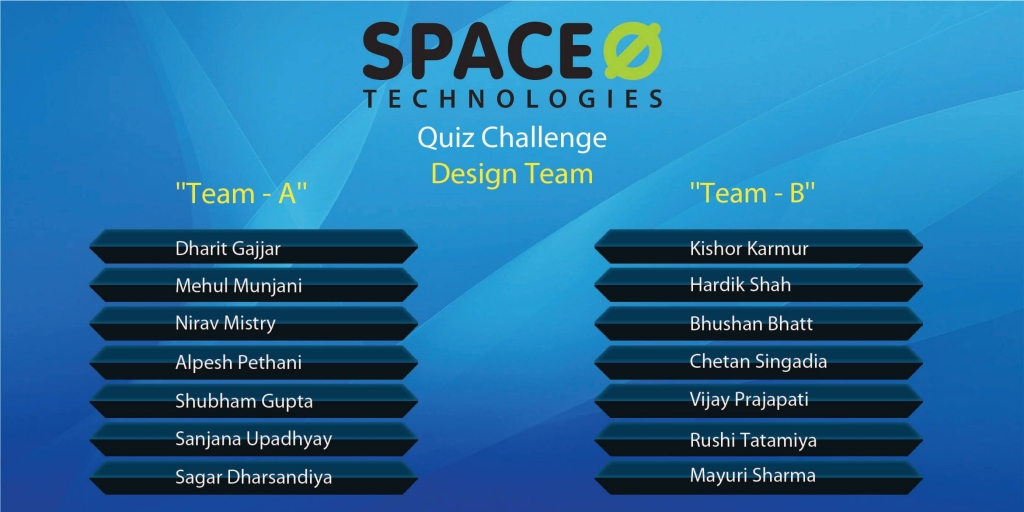 All of these teams got the fortune of moving forward to the Grand Finale round, along with a Wild Card Team. 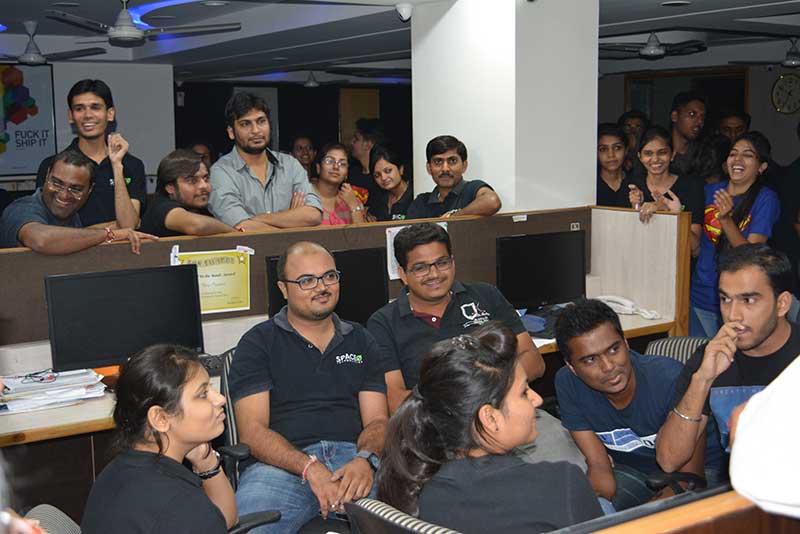 The Wild Card Team’s participants were:

This part of the quiz was actually an initiative to make the Space-O roots go deeper into the lives of the most important people of Space-O, its employees. The questions in concern were actually based on the life at Space-O, people of Space-O, the decor of Space-O and more. In fact the result of such a quiz was as surprising as the quiz itself. Every team except for the team that won, had tied for the 1st Runner’s Up position, with 20 points. The Team that won was leading with 1 right answer and 5 points.

The victorious team, that took the win graciously were; 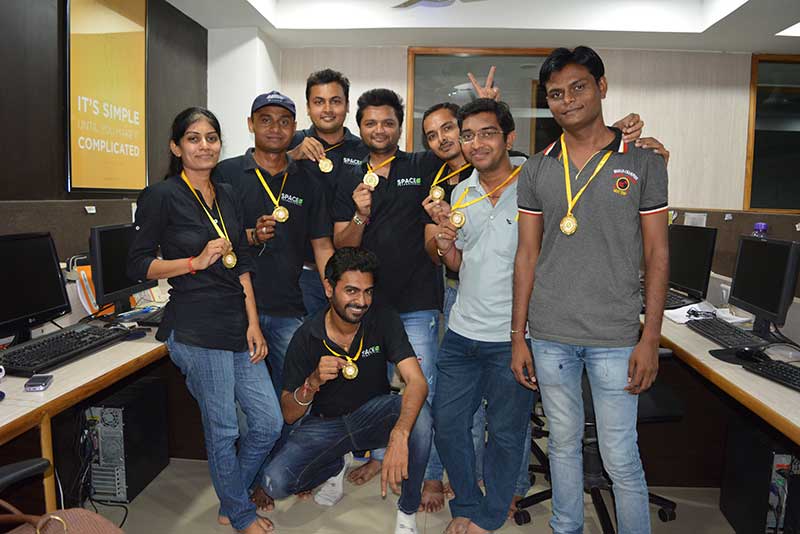 The hochpoch that this event created in terms of a team was remarkable to see. Every team had a person from Sales or Quality Assurance team, a Project Manager and obviously the concerned seniors and juniors of that particular technology. While, in general they might not share a connection in between them, they learned, prepared and fought like a team.

On the other hand, developers got a chance to go back to their books and look up the concepts like fresh students from the college, re-learning the concepts they now practice, since the very beginning. With enthusiasm and core interest, these developers went back to look at devices and versions of any devices per se. The competitive levels had gone high above, making the heat level rise in the hall.

But, this was the atmosphere required to unlearn and relearn everything that the Space-O astronauts thought might be asked in the quiz.

The competition ended on a note of emotional pride towards Space-O, a company that gives an opportunity to its team to bond and connect with each other while also having fun. Competitions and events like these truly define the working environment and life at Space-O.