Appreciation is a wonderful thing; it makes what is excellent in others belong to us as well. – Voltaire

Appreciation and motivation are two pillars of the structure that they call ‘job.’ Separating one from the other is very difficult. The right kind of appreciation is actually the one that motivates the other person to do better next time. It, therefore, takes a pat on the back of the lad to say, “you have done well.”

In order to make sure that the pat has been communicated well enough, that team Space-O organizes the Rewards and Recognition (R&R) ceremony.

R&R is not just a ceremony, it is a process. It starts from the time that the new quarter begins; from marking every task of every project to thinking who truly deserves the R&R and why, from conferences that generally conclude to a fight to discussions that lead to positive results, everything is a part of the R&R process.

Rakesh Patel shared the story of Tesla’s growth in technology, think big attitude in work and its new driverless feature in the car which he experienced in his last visit to the United States. He thus light a lamp of hope in our minds, for the better future of technology in India and at Space-O.

The R&R award started with a voice piercing the quiet of the office environment taking them on the journey to explaining why is R&R hosted and what preparations have been going on. The ambiguous voice then came on the mid-stage. The host for this evening was Aagna Trivedi, who is the humble content writer of this article.

The highlight of the R&R event, for Quarter 3, 2015, was that only four astronauts from the entire team of Space-O had been awarded, because of the dedication, positive energy, initiatives, and innovations that they showed.

These Astronauts Earned the Rewards & Recognition Awards for Q3 2015 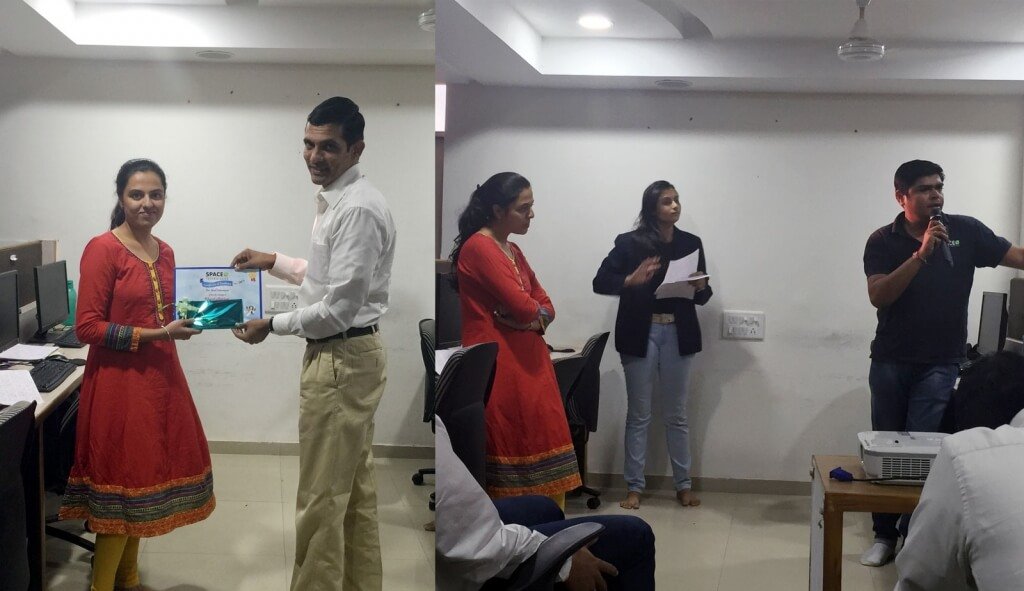 Without this person, the android team feels like an app, that has been created without the navigation flow. She has proven out to be the backbone of the Android team. She has always been the support system for her team, her projects and to those Android freshers who come to her for help. The award was handed over to her by the CTO of Space-O Technologies, Mr. Atit Purani. 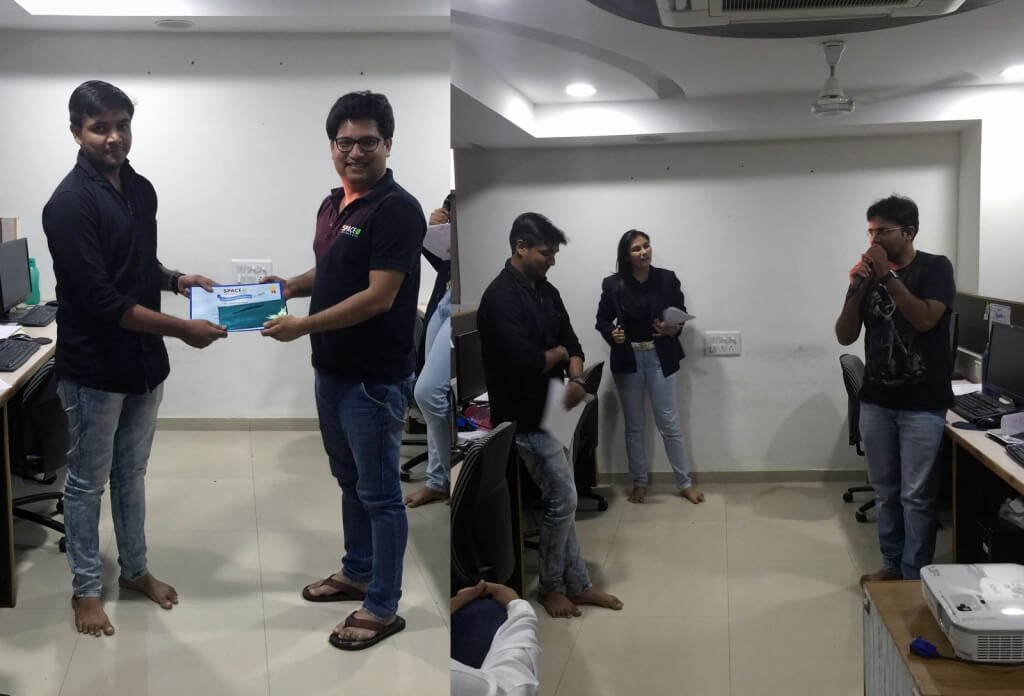 “When Sohil comes, everyone believes that the solution to every problem has come as well.” – Jigar Pandya (Project Manager) 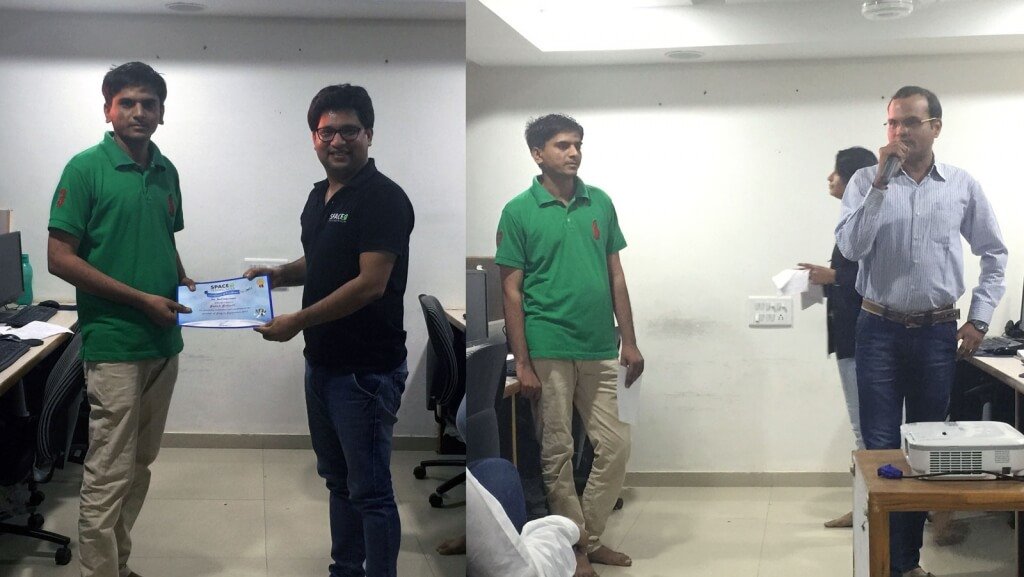 “He can be approached on any difficult topic and he is ready with the solution. He makes his project manager work easier.” – Chintan Modani (Project Manager)

Satish is the mind of the Android team. Acting calmly and smartly in every situation that comes across him. He proves an old saying to be true even now, ‘slow and steady wins the race,’ which he did by doing the work at his own pace, and yet perfectly, without the need of problem-solving, as he leaves no loophole in the work he does. The award was handed over to him by the CEO of Space-O Digicom, Mr. Utpal Vaishnav.

As a part of the event, to make things lighter, an activity was organized, which was named ‘R&R in 1 minute.’ Organized just for fun, this event allowed some of the people to win a chocolate in a minute. Two people will be called, one after the other, and the names of other Space-O employees would be given to them, whose style they have to do. Those who guess correctly and those who act fabulously would be awarded with a Perk. Making the day lighter and allowing the temperature to fall slightly, we then made it rise again, by restarting the award giving ceremony. 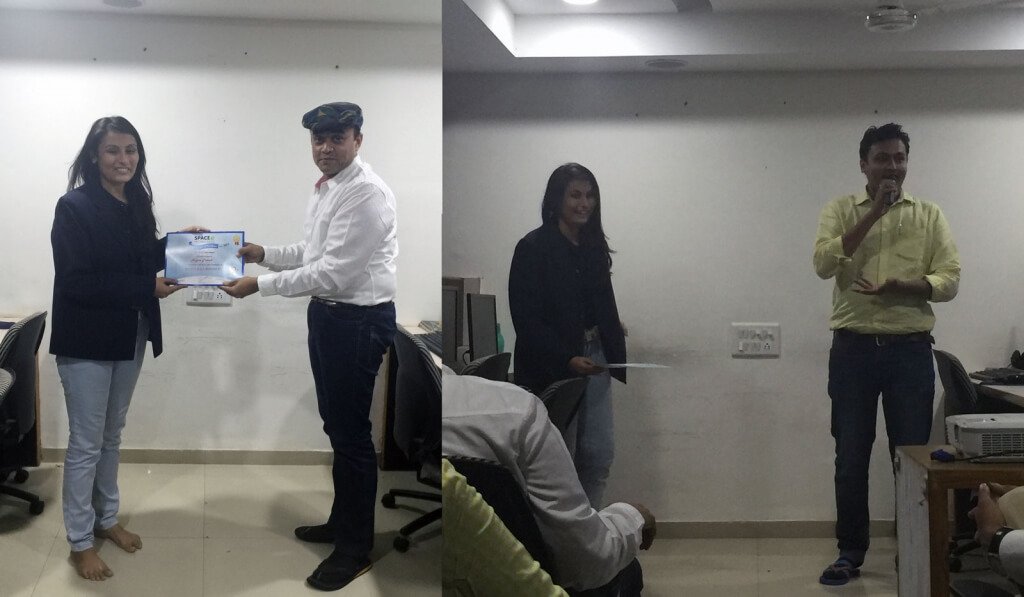 “When a person is active and enthusiastic, they create positive energy, which Aagna creates and is increasing in our team.” – Krunal Soni (Marketing Manager)

Aagna is the person that spreads a positive attitude in the team and allows enthusiasm to infect others in the team. Accepting challenges and learning something new out of it is her speciality. The award was handed over to her by the CEO of Space-O Technologies, Mr. Rakesh Patel.

The event concluded with a whooping applause for the four champions, who brought in positive energy, solution-oriented approach and enthusiasm, creating a strongly competitive environment for the next rewards & recognition ceremony, which is soon to come.