Come to Space-O. Create Value. Make a Difference. Get Rewarded.

There’s an old saying that goes as below:

“Value has a value only if its value is valued.”

Not only we believe in the above saying, this thought motivates us like no other thoughts.

Just getting motivated does not stop us. It is seen in our actions. To know how, please read on.

What Space-O is today would not have happened if people working with us have not created tremendous value for their stakeholders and we’re sure, our wonderful team of people would continue creating value for their investors, vendors, employees and customers….all the entities that directly or indirectly affected with the work we do.

This post is about one such wonderful person, Bhaval Patel, who not only put past two years of his life  but also his blood, sweat and tears  to create today’s Space-O.

How could we not value his wonderful contribution?

His contributions compelled us to not only pat his back but to gift a Car also which we feel will make a positive difference in his life. See the image below where our Co-Founder, Atit Purani is handing over the key of the car to Bhaval. 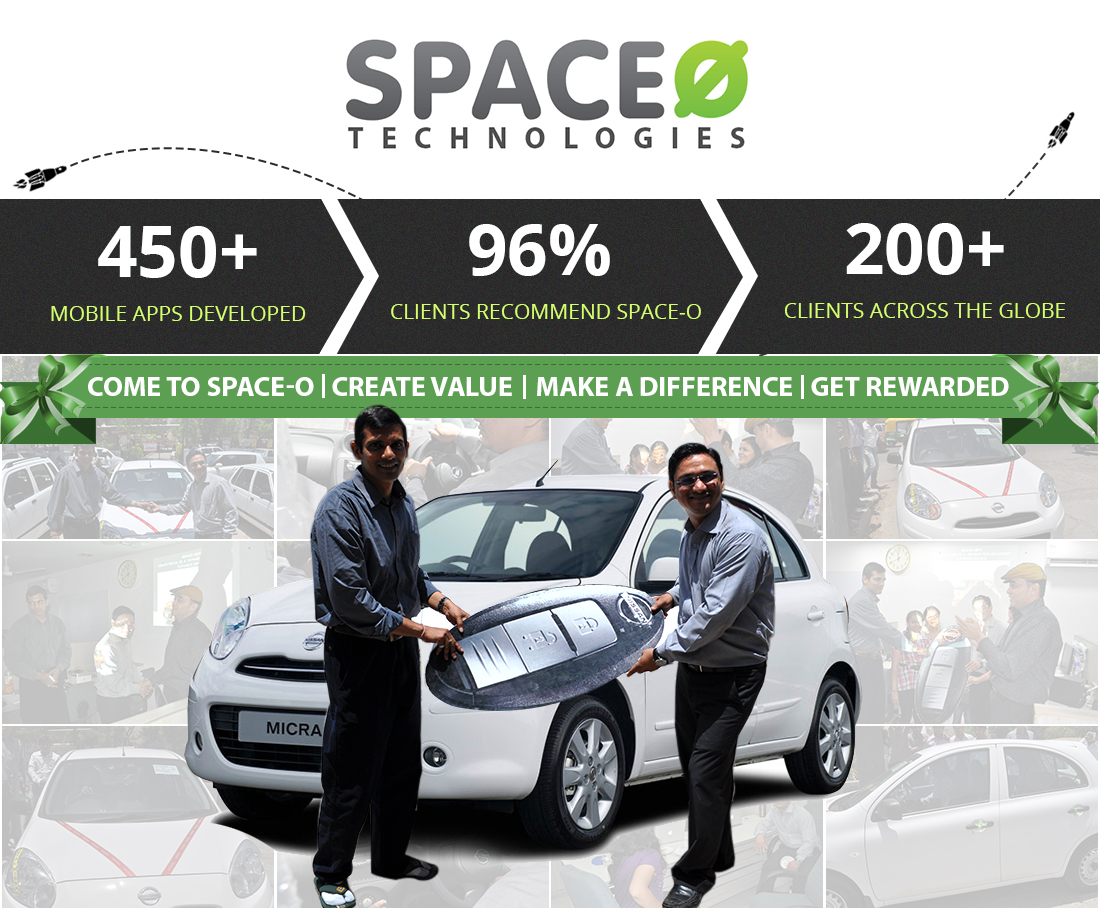 We initially planned to felicitate Bhaval on Space-O Technologies’ 3rd Anniversary however we did it early just a few days before the grand occasion because we did not want to wait for things to happen.

We believe that people should not wait for things to happen so we chose to put it in the action.

You may be curious to know more about Bhaval by now. Well, here you go:

Q: Who is Bhaval Patel?
A: Bhaval joined Space-O as a Project Manager two years back.  He managed projects and programs and shined as a Project Manager so as we grew and needed someone to head delivery, Bhaval was the most appropriate choice. He took over overall delivery and promoted as Head of Delivery. While heading the delivery, he led beyond his title and started managing client accounts, generated new business and making a difference in the “Sales” area as well.

Q: How does he do so?
A: He leads different functions of business by considering as if he is running the business. Essentially it means assuming personal risks and making decisions that might be good for the business. Hard work, ability to energize the teams working with him, continuous learning and most important – decision making ability are his commonly seen virtues.

Essentially, Bhaval is in the process of making his dream come true. He believes that when a person joins Space-O which aims to be India’s fastest growing Mobile Apps Development Company, he has the same possibilities that Bhaval had.

That is to make their dream come true. By putting in whatever it takes. By assuming personal risks while creating value for the stakeholders. By doing the things because they are right, not because their senior has told them to do…

When you choose a company to work with, either you will be taught to “comply” with the rules and be a cog in the wheel or you will be given freedom to create your own destiny. Work with a company who fulfills your dreams.

Here’s his favorite line which he uses in the interviews he conducts in an endeavor to continuously bringing in high-energy talents, “Come to Space-O. Create Value. Make a Difference. Get Rewarded.”