In an ambitious attempt to dominate the world of technology, Apple unveiled two new iPhone devices, along with the long-awaited smart-watch and a new mobile payment system at their September 9th event held in Cupertino, California. Even before the event started, it was tipped by experts to be historic.

Space-O organised a party for our team to watch the live-streaming of Apple’s September 9th event. The guys from Space-O Technologies were at wow with what the tech giants had revealed, as they enjoyed every moment of the September event with some refreshing Pizzas and Cold drinks to add the mood. 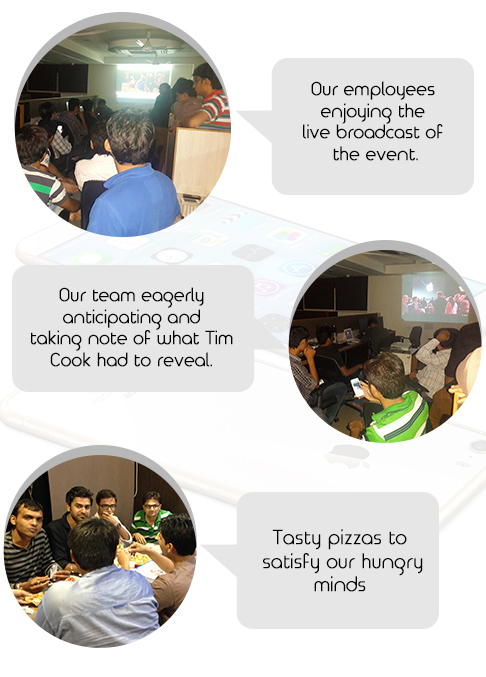 We had high expectations from Apple this time around, but they surely didn’t disappoint. Space-O’s programmers and other staff members present anticipated Apple’s unveilings, but all in all, there is no better way to watch it than with your own colleagues and buddies with some snacks and refreshments to go along.

Let’s now take a look at what all we saw.

“Today, we are launching the biggest advancement in the history of iPhone,” Apple CEO Tim Cook said at an event in Cupertino, Calif.

Indeed the two new devices were the biggest they have ever launched. The company released a 4.7 inch iPhone 6, along with a 5.5 inch iPhone 6 Plus. The latter being the first of its kind in the phablet market, a hybrid of a phone and a tablet. In order to simplify the use of the phablet, the on-off switch has been moved to the right of the phone.

These new devices will be available in the United States and eight other countries from September 19th.

Check out the new iOS 8

The newly released iPhone devices will come with the iOS 8. Some of the new features added to this operating system include the Health-Kit app, which can track the user’s sleep, blood pressure, heart rates, and other such data. This OS will be made available for the iPhone 4S, iPhone 5, iPhone 5C, and the iPhone 5S as well.

Apple stated that the iOS 8 will be accessible from September 17th, to those users who have the aforementioned iPhone devices.

Last but not least, Apple separately announced its first wearable device, the Apple Watch. This smartwatch has the functionality to pair up with the iPhone 6 and 6 Plus devices to view notifications. It is available in two different sizes with a sapphire crystal display. The Apple Watch will cost $349 and will release in early 2015.