Mobile apps and its success rates are becoming stalkers for the human race. It seems as if apps are here, there and everywhere. And to tell you the truth; they are. From apps for fun to apps for work, from apps as startups to apps for the established; apps are finally being rewarded with the title of being OMNIPRESENT.

However, how do you know that the app is successful or not? Many people have speculations on the same. From the number of downloads to making a good UX/UI. But these are ways of the old. The success of an app or any app at all can be decided from the users it can retain. “App’s user retention rate”, the only factor to measure the success of the app. It is the percentage of the number of users that returns to your app for more times.

Many users will download the app, use it once and if the app doesn’t work according to their expectations then they will uninstall the app immediately. Did the downloading of app make any sense. No! It didn’t. The app can be qualified as popular and successful if the users who once use the app and then come back to use it again. This is how user retention becomes a signal of the app’s triumph.

Currently the 3 apps that have the most user retention rate are: 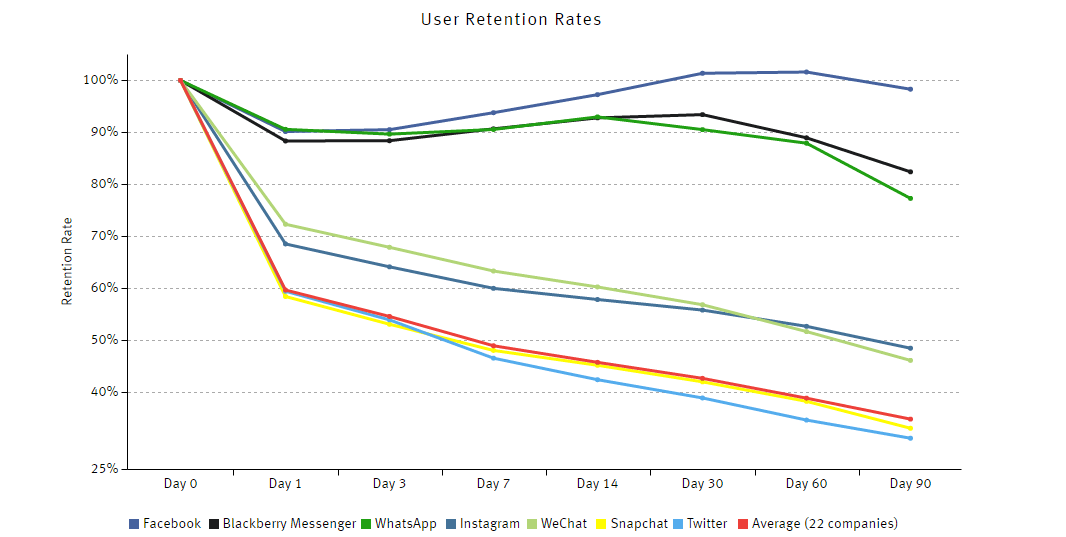 Markets have, as it is, adopted the philosophy of “Consumer is King.” And with that this becomes the right time to be a Smartphone app’s consumer. All the apps are trying their best to capture your attention making sure their app is par excellence in terms of quality, UX/UI and also answer the basic consumer requirements.

It is still the beginning of making a pathway in the long journey ahead. But most of the app making developers and companies are realizing the importance of user retention and are trying their level best to make sure the aim is achieved.

A study by Localytics shows that, in U.S, user retention rate has increased to 42% as compared to last year and the user abandonment rate are 19% at the same position since the last year.

But when a when a global picture is looked at, it doesn’t really work the same way as U.S. Globally, the user retention rate is dropping from 39% to 34%, compared to last year. Also a notable increase in user abandonment rate can be seen from 20% to 25% as noticed since the last year to this year.

One of the major reasons why user retention is frail or keeps on the downside is because users these day are infidel. Yes! They are and there is no need to be scandalized about it. The reason for this is that there are too many options and no valid reason that can stop the users from trying them all out. Also, every app is trying to provide good service and add value to the lives of the users. So what marks you different from your opponent?

How Can One Increase Apps’ User Retention Rate?

Improving the UX/UI can be a part of the solution but not the solution itself. But it is high time to now move beyond these small measures to make sure the user retention keeps on increasing.

You can only add a bit of the whole from your side. The rest of it needs to be incorporated to that bit after lending a ear to the users and their feedback. Learn by researching as to what does your app have that your competitor’s doesn’t. Make a proposition as to why should the users use your app and not your opponent. Be ready to listen to the feedback your users give you and implement on it immediately.

Talking to a valuable customer using the same old generic email is the old way and will not work. What will work is a personalized way of approaching the target audience by making sure you know why are they using your app. Categorize your users, see what they need and then send them a message banking on what their requirements are.

Push Notifications to make it easy

Customer is the King

Customers matter the most to any app at all. And it is important to make sure this feeling of importance reaches across dimensions to the consumers also. Most of the consumers move over to the other apps for specifically one reason amongst many others and that is they don’t think the app is making them feel special. That this app is not for them specifically. Or that a problem they had reported ages back is still lying somewhere, unsolved.

“$83 BILLION – the estimated total loss by American businesses each year due to lost sales as a direct result of poor customer service.” This data from helpshift.com, proves the above mentioned point true.

There is a disconnect between the app and the users and it is because of this gap that the consumers are feeling less looked out for. Whether by using push notifications or by sending customized emails/messages, this sort of a problem can be solved.

Create Communities in your name

Just because you have users who use social networking sites doesn’t mean they are a community. It is when they come together to be a part of a page on Facebook, that allows them a platform to communicate and give suggestions to make your app better, that they become the part of a community in your name. Make sure you have an important role to play in the conversations that take place on this page to reassure the consumers and make them feel important. Allow them to suggest changes in the product and the community page itself. And if the suggestion is feasible, then adapt to it to make sure the users don’t feel ignored.

Starbucks, started with the community named ‘My Starbucks Idea,’ allowing Starbucks foodies to get them tightly bound with the Starbucks experience.

Where there is a product there are customers and where there are customers, there are complaints. There is no point in denying the existence of grievances and grumblings. And there is no wisdom in sidelining the mistakes that have been made from your side. Instead it is best to come out in the open and mistake that has happened and to move on from that point on towards salvation.

Even people who are to be brilliantly flawless in the future, make mistakes in the present. Two of the biggest examples of the same are:

Flipkart’s e-mailer apology after the Million Dollar Sale fiasco. This is what it said, exactly. Here’s an excerpt. 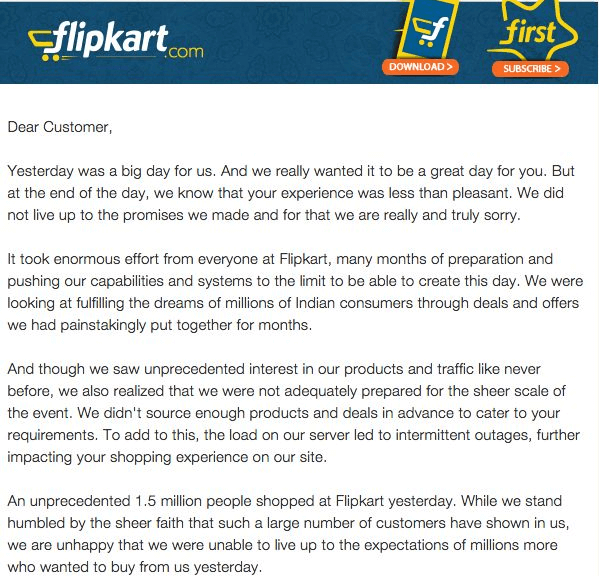 The other best sample to learn from is the Domino’s. Hosting a nationwide survey on how people react about Dominoes, without letting them know that this survey is being conducted for and by Dominoes, proved to be an eye opener for Domino’s Pizza. Getting reactions like, Domino’s tastes like cardboard, cannot be heart warming. But the chefs didn’t lose heart until they had finally created a product that mattered and that solved all these issues. With the new and tasty pizzas in hand they went to surprise all of those reviewers who had been their saviours at the right time.

The users expect a certain level of service from you. But if you go bigger and exceed their expectations, then that could be the masterstroke that helps you cross the river Nile. Acknowledge that there are problems, address them and then let the world know that you are the boss. For that, however, there is a need to go beyond the normal. Walk that extra mile and you can be way ahead of everyone.

Face the Problem and Reap it from its roots

As mentioned above, facing the problem is important and what is even more important is to find a permanent solution to the issue. Whatever the problem, however important or unimportant, it is necessary to make sure that the problem doesn’t recur at any cost or price. If the problem needs to be removed then that needs to be done by snatching its roots. Most of the customers expect an immediate response pertaining to their issue, and expect the product owners to do something about the app in any which ways possible.

Also, these days it isn’t even expensive to own a CRM software that manages the inflow of information from the app and demarcates it into different halves so as to make sure that the proper services are provided using the collected information.

At a certain point of time, it was difficult for the developer or the owner of the app to decipher who all use the app and for what purpose. Now actually, this process is made simpler by many tools that have the capacity of keeping a watch on the user’s activity and movement, allowing the developers to get authentic data on how many users are online and why, using which features. This means that the developers know what area are the user’s focusing on and thereby which area must be improvised and made better to increase traffic on that particular feature.

As mentioned at the beginning of the article, apps are many and options are more than ever before. And it is now that your true test starts. Once you get your mobile app developed, the hardest part now is not gaining the users, but it’s retaining the users. We have covered a lot of tips and hopefully it will help you.

Whatever you do, do not forget to add that little more that extra bit that will separate you from your opponents and improve your user retention to the maximum. Nevertheless, if you are planning any new app development projects, Space-O will be happy to help.

Want to Create a Fuel Delivery App like WeFuel, Filld or Booster? Don’t Overlook These 4 Handy Features to Make Your Uber for Gas App Successful