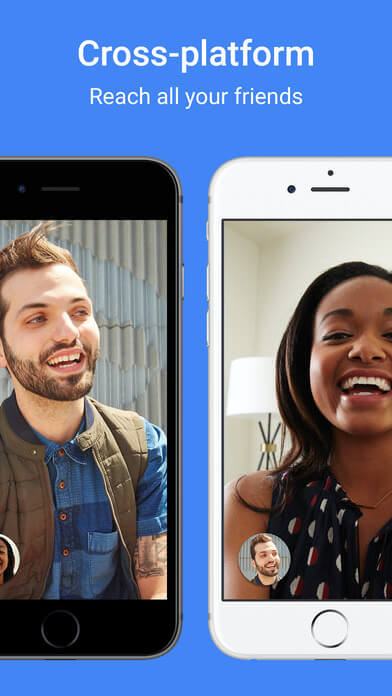 A new video-calling application, Duo announced by Google which is almost same as its predecessors. Duo is designed to be a cool video calling app that opens with a split-screen of the image and has a button to initiate a call, with recently called contacts listed next to it.

Duo works across Android and iOS devices, unlike Apple’s FaceTime.

“You shouldn’t have to worry about whether your call will connect, or if your friend is using the same type of device as you are. It’s no wonder that nearly half of US adults never make video calls on mobile.”

The strategy behind launching Google’s Duo is to attract iPhone users over to Android. Generally, Google’s app works better on Android devices than on iPhone, so the more that people get hooked on Google’s core apps, the less incentive there is to stay loyal to Apple.

Google’s head of communication products, Nick Fox said that the top priority with Duo was to develop a great product and to increase the use of video calling among Android users. However, he added that developing Android more attractive to iPhone owners was a secondary motive.

Nick said Duo’s appeal was that it was easy-to-use, widely accessible and fast. He said, “our view is video calling should work for everybody. If you can only call half the people you know, that’s very limiting.”

Apple doesn’t admit to being bothered by Google’s move of android video calling application. Last month, when iPhone maker reported falling in sales, Apple’s chief executive, Timothy Cook highlighted that the rate at which people were switching from Android devices to iPhone was the highest the company had seen.

Cook said that “Our year-to-date iPhone sales to switchers are the greatest we’ve seen in any nine-month period.”

We have tested Duo app to see how the new app plays into the argument about whether iPhone users should consider switching to Android devices. Comparing Duo with FaceTime, we found that Duo was just as instinctive and interesting to use as FaceTime, however, it was too early to tell which service was more consistent.

Contrary to Hangouts, Duo lets users do group video calls on mobile devices and computers. This application optimizes WebRTC and uses QUIC over UDP and achieved the degradation of video quality via monitoring network quality.

Users also find “Knock Knock” feature in this application that shows a live preview of the caller before the recipient picks up. According to the Google, it is used to “make calls feel more like an invitation rather than an interruption.”

Duo app allows users to call people from their contact list through a phone number. This application switches users between Wi-Fi and mobile data for the seamless transition. But, it is only possible in case of poor conditions.

There are many video calling applications like Skype and Hangouts available for android users for video calling. Apart from, many unique ideas bubbling in people’s mind to develop a video-calling android app with exclusive features. if you have such idea to build an Android app, contact us now. Let’s make it a reality,

Contact us now to Develop a Video Calling App