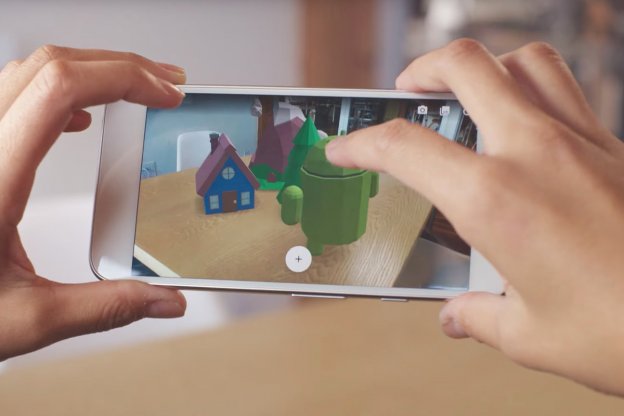 With Google’s new ARCore SDK, you can shape brand new experiences that seamlessly blend the physical and digital world. In this blog, we’ve outlined the top 3 features of ARCore, Google’s new Augmented Reality Android SDK, and how it’s going to transform android apps.

With more than 2 Billion active devices, Android is indeed the largest smartphone platform in the world. And for the past 9 years, Google has worked consistently to create a rich set of tools, APIs, and frameworks that help Android app developers in creating feature-rich and user-friendly Android apps.

Recently, Google released a new Software Development Kit (SDK) called ARCore. This new SDK is going to bring Augmented Reality capabilities in the existing and future Android apps. In fact, Space-O Technologies, being an Android app development company, has started to train their developers for the AR App development.

Just Apple’s ARKit, the ARCore is a developer framework that allows Android app developers to use Google’s new in-house AR Tech and create Augmented Reality experiences in their Android apps.

The ARCore will enable AR app development for the entire Android ecosystem, giving the ability to build captivating AR experiences for the millions of Android users all over the world.

In short, ARCore is for Android What ARKit is for iOS.

Now, all these may already sound quite impressing, but you still don’t you know the best part!

The best part is, ARCore works with Android Studio, Unity, and Unreal.

In fact, Google and Unity have a shared vision of democratizing VR and AR app development. Unity’s XR team has been working with Google to overcome some of the most difficult challenges Augmented Reality app development presents.

But overall, technologies like ARCore presents new opportunities for creating AR experiences to millions of Android smartphone users. And with this SDK, Android app developers can use Unity to create high-performance Augmented Reality Android apps or upgrade existing apps with AR functionality.

ARCore offers an entirely new set of features for Android app development. It can create virtual objects and render them over real-world views that connect information directly with the physical objects and react as if it is actually there. The following are its top 3 features which makes it happen.

In simple words, Motion Tracking will allow Android users to walk around and interact with Virtual content that is rendered in the 3D world. By using the smartphone’s camera to observe feature points in the room, ARCore will determine both the orientation (pose) and position of user’s device as it moves. The virtual objects will remain accurately placed.

It’s common for Augmented Reality objects to be placed on a surface, floor, or a table. The ARCore, therefore, can detect horizontal surfaces using the same feature points which it uses for the motion tracking.

In short, the ARCore allows virtual objects to be placed in a way that is physically connected to the real world.

The light estimation in ARCore can create realistic looking AR objects by having its own light change dynamically as per the environment’s lighting. ARCore observes the light in the environment and makes it possible for Android developers to light their AR objects in a way that match their surroundings and make their appearances much more realistic.

The SDK currently supports AR app development for Google Pixel, Pixel XL and Samsung’s S8 (SM-G950U, SM-G950N, SM-G950F, SM-G950FD, SM-G950W, SM-G950U1), running Nougat 7.0 and above. But, Google is currently working with manufacturers like LG, HUAWEI, Samsung, ASUS, LG, and others to make it available for 100 million devices at the end of the preview.

What Kind of Android Apps Can Be Created With ARCore SDK?

The most obvious types of apps include games since Augmented Reality is a natural fit there. Pokemon Go is one famous example. But besides games, other types of apps can also take the advantage of ARCore SDK.

From shopping apps to social media and travel apps, it’s possible to integrate AR functionalities into all of them with different & unique ideas. Currently, there aren’t many examples of Android apps created with ARCore SDK because it was just released. But you can share your idea with our business analyst by filling out the below form or through our Contact Us page to get an accurate estimation for your mobile app development project.

How to Implement Firebase Push Notification in Your Android App?