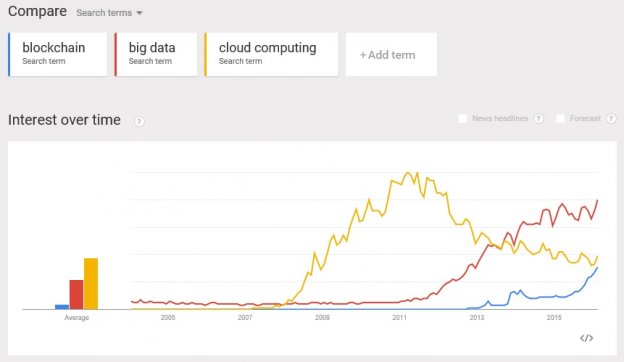 This blog is for the Startups and the Entrepreneurs who want to invest in the bitcoin app market. Herein, we’ve rounded up the top blockchain predictions of 2020, which can help you to create your own business model down the road.

Undeniably, a game-changer- bitcoin has been buzzing since its release on 11th Nov 2017.

Bitcoin flies all-time high, and it has been rapidly gaining speed after a few months of its release.

The year, 2018 has observed growth in cryptocurrency. As you can check in the below image, according to the report, “Bitcoin is gaining $1,000 at a faster and faster pace”. 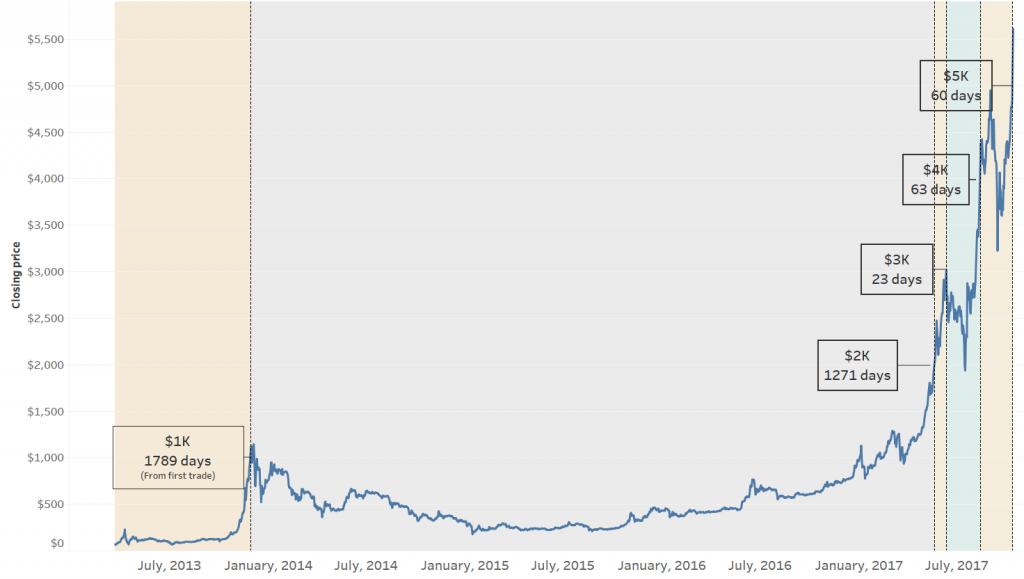 Furthermore, Bitcoin has soon become one of the most talked subjects among people. You can check its popularity on the graph below:

Now, you may be already aware of the concept of Bitcoin and Blockchain. However, before starting off with the future of Blockchain or predictions of 2018-19, let’s go through with the terms (Bitcoin and Cryptocurrency) briefly.

Bitcoin: It is a digital currency, and a worldwide payment system, which works without the central bank or single administrator.

“To transfer a unique piece of digital property from one internet user to another internet user in a way in which transfer is guaranteed to be safe and secure”, said Marc Andreessen, the co-creator of the first commercial of the Web browser, and a big investor in technology ventures.

Blockchain: It is a public ledger, which records bitcoin transactions. In simple words, this ledger organizes into blocks, which has a certain size limitation. It has a maximum size of 1 MB (megabyte). That means blocks can record just seven transactions per second at the most.

“Blockchain Technology is an incorruptible digital ledger of economic transactions, which can be programmed to record not merely financial transactions, but virtually everything of value”, according to Blockchain Revolution.

Well, the Blockchain solutions are still a way off from changing the world. Herein, we’ve summarized top five blockchain predictions for 2018-19, which you need to watch out right now.

According to the report of IDC (International Data Corporation), “By the year of 2019, 20% of all IoT deployments will have basic levels of blockchain services enabled”.

The Blockchain is a big deal now.

Since the distributed ledger technology, Blockchain is continually looked upon in an Internet of Things (IoT) context. The proof is here. We came across the statement, and the report says, “IoT data and blockchain can lead to intelligent automated insurance policy applications”.

Furthermore, “The blockchain is also becoming important in third-generation security”, according to Dan Bieler, the Principal Analyst.

And, talking about the predictions, then how both technologies blockchain and IoT could fail to take place at the top! In order to improve business processes and day-to-day life, these technologies will surely continue to work together in the year of 2018-19 and beyond.

In future, you will see both the technologies – Blockchain and the IoT (Internet of Things) altogether. You can check the Blockchain benefits for IoT in the below image: 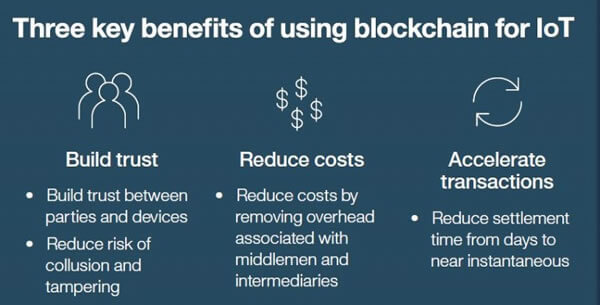 In order to use Blockchain for IoT data, it can offer the new ways to automate the process of the business among the partners. As long as the setting up the expensive and complicated centralized IT infrastructure is concerned, you don’t need to spend a fortune for it.

Furthermore, cryptocurrencies built on blockchains would prove the ideal one in order to automate micro-transactions between the machines.

In the prediction – Blockchain applications meet the IoT (Internet of Things), you will see breakthroughs in the year of 2018-19.

2. Blockchains Will Come Out With Its Own Asset-Tracking Tool.

You may be aware of the term “Tokenization” – a concept behind bitcoin technology.

Well, Tokenization serves the purpose of identification and accessibility of the platform.

If we talking about the Blockchain platform, it is powered by “tokens” or “coins”. Bitcoin is also considered as the token, which functions over a Blockchain technology.

According to the PCMag report, “There are still far too many blockchain systems, which seem to treat this amazing new technology as a nifty kind of distributed database service or digital notary”.

Therefore, using a token to represent an item ensures that it never appears to be in two locations at one time. Likewise, in traditional currencies, you can use tokens to represent assets. Therefore, this approach can offer all the advantages of blockchain-based solutions without any exchange risk.

3. Bitcoin will Implement the Rule of Law

You may be aware of the term “Smart Contract” in bitcoin. It is a piece of code which is stored on every computer network. They all execute and get the same result. In addition, for automating business process operations, Smart Contract is recognized as powerful tools. They will become key productivity enablers for enterprises looking to control the blockchain.

Nevertheless, what if when parties to contract to get into a dispute? Well, all these subjects are usually settled by courts; however, they have no authority over blockchain networks. After analyzing the entire situation, Bitcoin is planning to implement the ‘rule of the law’.

4. The Utilization of ‘zero-knowledge’ proofs will grow.

You may agree with the statement that blockchain is a powerful platform for transactions between two parties or groups.

Before moving ahead, it is important to know the concept – ‘zero-knowledge proof’ as it states –

In general, the zero-knowledge proof is one, which reveals the truth of the certain statement, without revealing the additional information beyond what it is trying to prove.

Likewise, in the concept ‘zero-knowledge proof’ in the blockchain, other people only know that the valid transaction has taken place, but they will not know about the sender, recipient, and quantity.

Zero-knowledge is a mathematical operation and a cryptographic tool, which allows one group to prove to another, which is something verified without needing any additional information such as private key (an integral component of Bitcoin), in case of public-key encryption (a cryptographic system, which uses two keys: Public Key and Private or Secret Key).

Furthermore, some experts predict that the large enterprises will build their own personal blockchain networks. According to the report of the enterprise project, “Suppliers and customers cannot and would not join the private blockchain for every one of their business partners. And, the long-term future of the blockchain relies on the ability of companies in order to conduct private business over a public.”

When it comes to the predictions of blockchain technology, the zero-knowledge proofs are merely starting to show the working models in the year of 2018-19. This concept also allows blockchain to have the key elements like security and privacy without abandoning redundancy and immutability, which comes from synchronizing the full transaction information throughout the network.

5. Proof-of-Stake (PoS) Will Be Continually Dominating The Blockchain Consensus Game.

The first idea of PoS was suggested in 2011 on bitcointalk forum – according to blockgeeks.

Hence, in order to reach the consensus, Blockchain solutions makes use of Proof-of-work, while Ethereum switched to proof-of-stake (PoS) over proof-of-work.

According to Media.consensys.net, “All eyes in the blockchain space will be watching the transition of Ethereum from proof of work to proof-of-stake”.

The Ethereum community and its creator, Vitalik Buterin, are planning to make a transition from proof of work to proof of stake.

There is the reason why Ethereum and its creator have chosen proof of stake over proof of work because in the distributed consensus-based on the proof-of-work, where miners require a lot of energy.

According to the data, “1 Bitcoin transaction is required the same amount of electricity as powering 1.57 American households in one day in the year of 2015”. And, it leads the constant downward pressure on the digital currency value.

Moreover, Proof-of-Stake (PoS) has significant advantages such as it has the ability to reduce the large electricity consumption, plus hardware costs in order to secure a blockchain.

Also, according to the recent report, “It is estimated that Bitcoin electric consumption will trend toward equivalent consumption of the country of Denmark by the year of 2020”.

This is due to a large amount of energy consumption, Ethereum community wants to exploit the Proof-of-Stake (PoS) method for more greener as well as a cheaper distributed form of consensus in upcoming years – according to cryptocurrency predictions 2018-19.

Apart from these blockchain predictions of 2018-19, let us check out the growth in the bitcoin wallets, briefly.

Growth in The Bitcoin Wallets

According to the latest report of Blockchain.info, “The number of digital currency storage wallets has nearly doubled from the last year, while the lack of a selloff in other digital currencies indicates that the new money is flowing into bitcoin.”

In the below graph by Blockchain.info, you can see the number of wallets from the major wallet companies, which has nearly doubled to 17.5 million from about 9.2 million last year.” 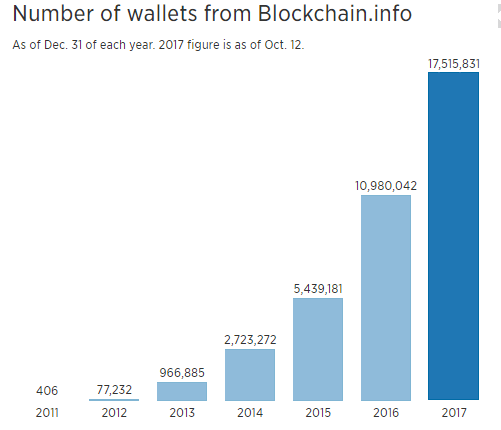 Hence, it is a tremendous growth in the wallets.

What Would Be The Next Step?

Instead of aforementioned trends in blockchain development, 2018-19 will be the year where you will see tremendous growth in Blockchain. According to the partner at crypto-fund Placeholder Ventures, Chris Burniske, “A strong crypto bear marketplace in 2018-19 would sharpen all of us”. As far as cryptocurrency predictions are concerned, you will continually see the hype, and it will grow for the next couple of decades, undoubtedly.

Therefore, if you are planning to develop a Bitcoin Wallet App, then you can hire dedicated developers from the best blockchain app development company. Also, keep these predictions in your mind before investing your valuable time in blockchain application development.

In case, still, if you have confusion or query like how to build blockchain application, get in touch with us through below given form. We will revert you within 48 hours with an optimal blockchain app solution.