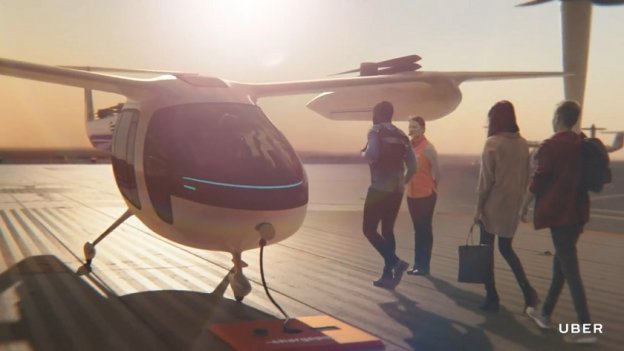 After a few years from now, grabbing or hiring a taxi could mean to take to the skies. Yes! you read it correctly. In the near future, people can hire a flying taxi to travel from one place to another using flying taxi app, avoiding huge traffic that they are facing in their daily life.

Recently, Uber, a ride-hailing giant, has launched a new project, called Uber Elevate, to bring flying cars to commuters by 2021. Explaining the whole project, the company issued a white paper outlining its plans for the project.

What is Uber Elevate?

Uber Elevate is a network of on-demand electric aircraft. Known as VTOL aircraft that is a short form for Vertical Take-Off and Landing – the aircraft would be used to shorten commute times in busy cities, turning a two-hour drive into a 15-minute trip.

Let’s take one example if you are traveling from San Francisco’s Marina to your work in downtown San Jose – a drive that usually takes approximately 2 hours, but with a flying taxi, you can reach your workplace within 15 minutes only.

Check out this video to get more idea about Uber Elevate:

Across the world, millions of hours are wasted on the road every single day. Last year, the average San Francisco resident spent 230 hours commuting between work and home, which is half a million hours of productivity lost every single day. So, Uber is working extremely hard to allow its customers in the future to push a single button and get a high-speed Uber air taxi flight in and around cities.

Along with Uber, other companies like Airbus, eVolo, eHang, and Terrafugia are also taking interest in the flying taxis, to make it easy for people to hail a flying taxi using an just like Uber. But companies are also identifying the most critical challenges to tackle before all jetting around in flying cars.

One of the first challenges that these companies can face is passenger’s safety. The aircraft need to be a lot safer than driving a car on a fatalitiesper-passenger-mile-basis.

For commuter and on-demand flights, Federal Aviation Regulation (FAR) have twice the fatality rate of privately operated cars, so flying taxis can be quite difficult, considering this rate.

Possible Option: However, this rate can be decreased through VTOL aircraft to one-fourth of the average part 135 rate that makes VTOLs safe as driving. DEP and partial autonomy are the main pieces of the safety equation.

Helicopters are the closest proxy to the VTOLs anticipated, but they are extremely expensive to operate as part of a large-scale transportation service. These are considered as energy-inefficient and very expensive to maintain, and their high level of noise limits use in urban areas. However, the demand for helicopters is modest and it translates to low manufacturing volumes.

Possible Option: One of the simpler, less noisy, and operationally efficient vehicle designs should be proposed that leverage digital control instead of mechanical complexity. It is expected that this shift can jumpstart the good cycle of cost and reduction in price.

The vehicle and Economic Model section goes into detail concerning the evolutionary pathway to a mass market through affordable vehicles and operations.

As we have already discussed that helicopters are the closest proxy for the VTOLs, but they are considered as energy inefficient to be economically feasible for big-scale operations. Moreover, helicopters are mainly designed for highly flexible operations requiring vertical flight.

As the more forced use case focusing on ridesharing, a more mission-optimized vehicle is easily possible like making use of distributed electric propulsion technology.

Possible Option: Some of the biggest enhancements are feasible as DEP allows fixed-wing VTOL aircraft as it avoids the fundamental limitations of helicopter edgewise rotor flight, and wings also allow lift with far greater efficiency compared to rotors. However, there is not a single manufacturer yet, who have established a commercially viable aircraft that features DEP, so there is a real risk here.

Also Read: Uber For Helicopters – Create a Heli Taxi App and Expand Your Taxi Business to The Sky!

Challenge 4: Safety in the Air

When it comes to traveling by air through flying taxis, safety in the air is the major challenge with the higher crash-rates of Latin America, Africa, and other developing regions. In addition to this, U.S. pilots are also under inspection because cockpit automation and highly congested airports can be proved quite hazards.

Possible Option: To make sure the safety in the air, it would be good to ensure that security screening is effortlessly integrated into the smooth operations of the VTOL aircraft. Moreover, an app-based operator can also be positioned to leverage technology to integrate and decrease any problem of security requirements while eliminating time-consuming steps that riders are subjected.

So, these are some of the challenges that ride-hailing and transportation companies can face while planning to deliver flying taxi app to their customers. As already mentioned that these companies have started working on flying car.

What do you think as a taxi service provider company? Have you decided to develop flying car app like Uber? Even companies like Ola, Lyft, Grab and Meru can also think about delivering a flying taxi service to their customers.

If you are already delivering taxi booking services successfully and have a flying taxi app idea in your mind, you can discuss it with us today through below given form and our representative will get back to you asap.

Have You Ever Thought to Build Taxi-Booking App Like Uber? Here’s Everything That Will Help You to Uplift Your Business like Uber

Car Sharing Apps Are Disrupting Car Rental Industry: 4 Core Features of Getaround (Peer to Peer Car Rental App) That Valued at Over $1.5B