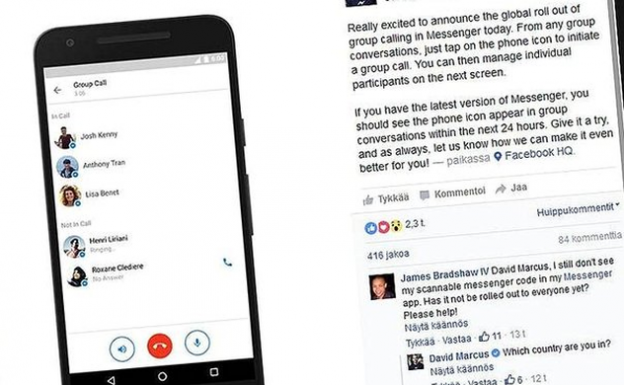 With a group-calling feature, Facebook Messenger application enables users to dial up to 50 friends simultaneously over the internet. The Messenger chief David Marcus said it should show up as a phone icon in group chats. From there, users can able to add new participants to call. Facebook clears that Messenger restricts to a video-chatting feature, it is just one-on-one conversations.

Messenger is one of the fastest Facebook’s products having more than 800 million monthly active users. The company also added new features left and right to capitalize on its huge audience. Those features include artificial intelligence-powered bots, fun mini-games like chess and basketball, a Venmo-like payment feature.

Have you got the latest Facebook Group Call feature? That’s great.

It’s time to get connected with your friends and talk together through the Messenger. In order to make a call, you just have to tap the phone icon and the next screen allows you to manage the people, who are participating in the call.

Users can use Google Hangout and Skype when they don’t find multiple people participate in video chats. However, it is only a matter of time before Facebook makes it possible, as something more than 800 million monthly users of Messenger wants.

The group calling experience is similar to a person-to-person call, however, the user can only find the group’s name and the list of members. Every member of the group has the right to accept or decline the call, as per their convenience.

This feature enables users to call and talk with multiple family members and friends. And also, you can use this feature for work calls.

There is no group video calling available in Facebook Messenger. However, Facebook started offering VoIP in 2013 and individual audio calls in April 2014. After one year, Mark Zuckerberg announced that the Messenger had already made 10% of all mobile VoIP calls worldwide.

Sharing his thought about one-on-one video calling, last year, Stan Chudnovsky, Messenger’s head of product, said, “Group video calling is definitely a use case that a lot of our people might be interested in at some point…[and] it would be a big deal if the whole [shakes hand to simulate the lack of video stabilization] thing goes away.”

Messenger also enables people to easily block people, unlike phone numbers, where you have some control once stranger knows your contact number. All thanks to Facebook’s spam detection systems that make difficult for people to create a new Facebook account to harass anyone.

Messenger could serve as a better replacement for Line, WeChat, and Skype as it allows users to set up easy conference calls with people, whose contact number you don’t have. Group calling within a messenger platform isn’t exclusive for the people. In fact, in March, Line offered group calling that supports up to 200 people, and WeChat added support with group video calling in September.

Right now, Facebook added group calling up to 50 people, however, it is capable of competing with Line, WeChat, and Skype, as it has more than 800 million users.

We have developed group calling app, schmoozer that connects two stranger people, who have a common interest. Schmoozer aims to connect people each morning on the way to work, jogging, etc. on the basis same interest, sports, music, TV shows and even, speak the same second language. It enables people to be the part of their favorite fan groups and start chatting to discuss fan theories.

Develop Your Own App with Feature like Group Calling Integrated in Messenger.

Why Yik Yak Launched Private Chat? [A must learn lesson]