Around 60% of the music, listeners are using smartphones to listen to music and developing music ios app with a different approach will always be on top.

There are different types of music applications, ranging from free radio apps to video community app, where users can create, share, and discover short videos. 13% of smartphone users have at least one music application on their device whereas 15% music-lovers have one premium paid music app.

Recently, we have found one interesting application that loved by Teens. This new Instant Video Community App, Musical.ly enables them to create, share and search short videos. More than just a lip sync video development app like Dubsmash, musical.ly app is the full on social networks with challenges, talented, and hilarious creators to entertain every user.

Musical.ly is mix clone of Vine, Dubsmash and other types of video apps

Having similar features like Vine and other video application, it allows users to record different clips that can be joined together to develop the best video.

This application allows to shoot and import a video to an app to add music to it. It also allows adding a variety of effects to upgrade it.

Here is most popular video which tells you how to create videos through musical.ly

1) ‘Challenges & Contests’ Feature for Users to Show their Talents

People love to compete and win in challenges, that’s why musical.ly app has the contests and challenges. Users find a rotating list of trending topics to compete and show their talent with a focused topic.

There is a musical.ly lip sync contest and ‘Don’t Judge Challenge’. Moreover, to find more trending tags, you can tap the search icon. Interestingly, you can also create your own version of songs, you can tag the circle with the album art and a small yellow dot available in the upper right. When shooting the video, you just ensure that the musical.ly videos are in portrait mode.

Don’t want other users to see your musicals? It’s simple to make your account private by just going to profile and tap on the head in the lower left and tap on the ‘Settings gear’ in the upper right. Scroll down until you see the Private Account and then, toggle on this.

3) How users get Featured on Musical.ly?

Users can also get featured on Musical.ly by creating with “creative, original, entertaining, or a combination of all three qualities.” Users don’t have to pay any amount to be featured, however, they have to boost their odds by checking the trends that available on the Discover screen with hashtags and have to create more videos connected to the trends.

The company stated –
“Musical.ly does not condone or endorse any website which offers to sell crowns, features, likes, or followers. We are not responsible for damages that result from participation in these websites.”

How Music Apps like Pandora and Musical.ly Make Money?

Earning money through a music app is hard, but not impossible. There are users, who pay for playing games, but not for other categories of apps.

There is a definite space for advertisements through which you can monetize app application. 2016 is a goal for being profitable for every app owner. That’s why they focus and refine monetization strategy, considering the market, audience and of course, business goals.

When your main aim is to boost your brand or business with an app, you may not go for ads and in-app purchases but, expand your customers. No matter, what strategy you implement, ensure to track your own data especially when you are giving free to paid upgrades.

Once you have gathered data, just innovate and give new things to your users. This surely works for your users and business as well.

Now, this application has rounded $500 million post-money valuation. This application is popular among the 60 million users in the U.S. Being similar like Dubsmash, musical.ly is more of the social media platform and thus, the company calls it a “video social network.”

A board member at musical.ly and a partner at GGV Capital, Hans Tung said that he was “impressed by the founder’s ability to turn a tool into a social network.” He sees it as an “opportunity to create a new form of expression.”

This application has more focus on the music video, however, we are heard that some pending updates that would expand the app’s appeal to older demographics.

MusiXmatch is the #1 Music Lyrics Player, having over 25 million users. This application is popular for powering the lyrics feature in Spotify’s desktop app. with this application, users let read the words of their favorite songs on the go.

The Musixmatch app for iOS has been updated with Spotify integration, displaying the lyrics, as you are playing music in the application. If you have Spotify Premium account, then you must have this app on your smartphone.

Musixmatch has more than 30 million monthly active users and this application has been downloaded by 50,000,000 times. Music application for iOS, Musixmatch has big plans to become the biggest data provider of the music industry in 2016.
CEO Massimo Ciociola says,

“We’re the same as Foursquare; they collect venues and sell location data, we collect music words and we want to sell data that shows why we know what you listen better than others. We can prove why millennials love Taylor Swift and don’t like Coldplay, and we can prove why millennial boys love rap vs millennial girls because our platform understands all the meaning and the vocabulary and the expression of any single track.”

Is Musixmatch Connecting with Spotify for Revenue?

Musixmatch app with 6.0 version connects with Spotify and can link its huge catalog of lyrics to the music streaming service’s huge collection of music, and show it on mobile. Since February, Spotify has been offering Musixmatch lyrics on the desktop.

Want to see Musixmatch lyrics of your Spotify music? Just connect Spotify Premium account in the updated music application. After that, you can stream your favorite tracks, saved lists and synced Spotify’s library within this app. As everything is done within Musixmatch, you don’t have to play music first in the Spotify app.

Ensure to remain exclusive to tracks played from Apple Music, as Musixmatch’s Spotify integration doesn’t work with Musixmatch’s Today widget. Don’t you think Spotify is sharing some amount to Musixmatch for every user that connected with it?

Musixmatch licensed their data, i.e. lyrics, and music vocabulary data to the companies, who are interested in getting the data about music.

Musixmatch 6.0 application also has LyricsCard themes, which are suitable for sending cards in the holiday season. To send the card, you just have to tap the ellipsis button in Musixmatch’s player and choose Create LyricsCard, click on images to select from any of the five-holiday themes.

There are many other music applications like Rap Genius, Sing by Smule, Croak.it & Carenga (developed by us) become popular due to its coolest features. Croak.it app enable users to share their sounds of 15 seconds. Whether users want to record song, poem or to say weather forecast, Croak.it! easily get your voice out among your friends.

Carenga spreads the power of music by focusing on music sharing. This application allows users to create playlists, search and listen to songs and share it with their loved ones. We have wonderful journey while working on Croak.it and Carenga applications, we would love to discuss with you for the future possibility of music apps for iPhone and Android devices.

We have wonderful journey while working on Croak.it and Carenga applications, we would love to discuss with you for the future possibility of developing music ios app for iPhone and Android devices.

Want to hire the best people around to design, develop, and turn your music app idea into reality? Well look no further! 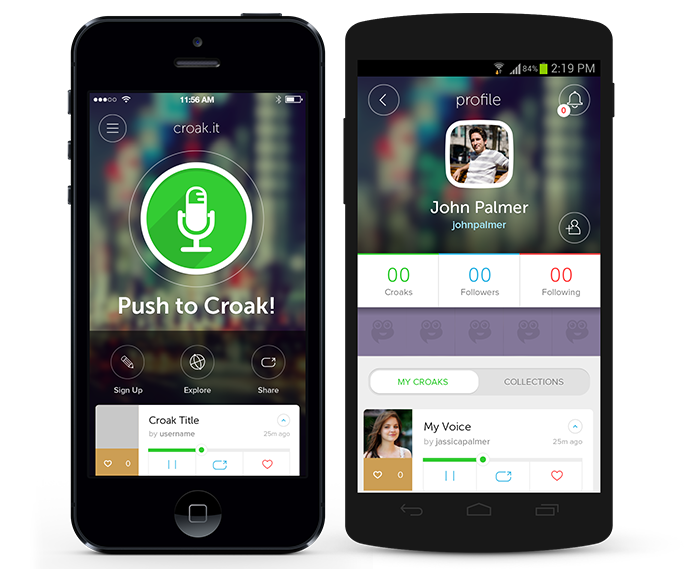