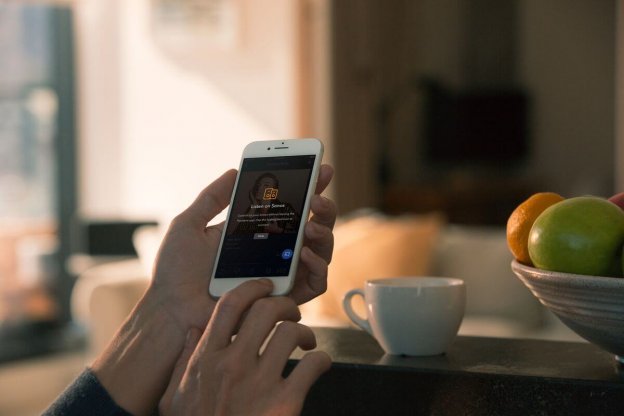 This blog is for startup newbies and the Entrepreneurs, who want to build a business model in terms of music streaming app, which can connect to the wireless home sound system. Herein, we’ve built up top features of the music app, and validate your idea in which you’re working on.

Remember, in the old time, listening to music was just limited to cassettes and records, walkman, and CD players. With the advent of technology, whereas each and everything has been shifted to apps and handy devices, which you can access on-the-go throughout the day. Similarly, with the music streaming apps like Spotify, you can follow artists, and sync music from the desktop, or create radio stations like Pandora radio app.

To start with the insights of the growth of music apps. According to the report of Business Insider, because of the emergence of all these music apps, “Music streaming has saved the industry.” It means that music streaming apps has been creating a buzz, and if you are planning to create your own music app like Spotify, then it is time to invest in it.

Here we’re now moving ahead with the growth of music apps, according to the sources, “With 112 million paying subscribers to services like Spotify, Apple Music, and Tidal, which ensured growth in streaming revenue, and it went up more than 60% in the year of 2016”.

Talking about the total revenue of music streaming apps in the U.S market, and the graph shows the upward trajectory – according to report of Business Insider. And, it also shows that the music apps will always be on the trend. If you are thinking to create music app, then you need to look into the below image: 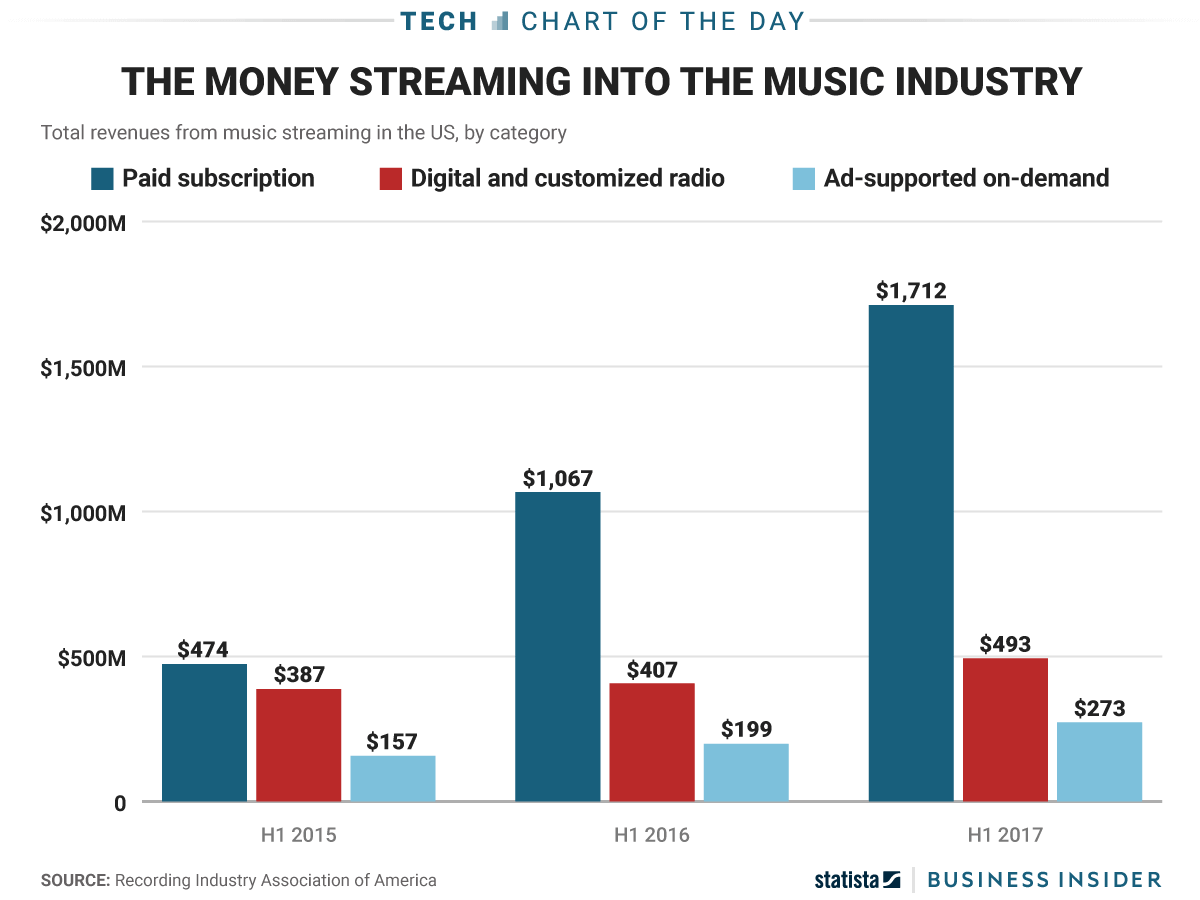 If we would talk about the examples of one of the best music streaming apps are Spotify, Apple Music, Pandora, and Google Play Music. In the graph below, you can see the Spotify is still dominating among other music apps. 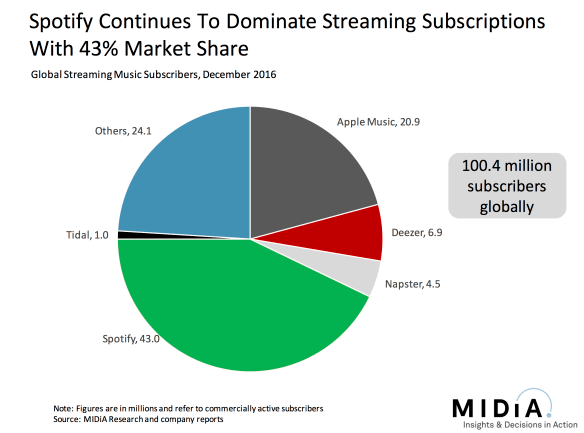 Herein, you have checked out that the music applications, which has been exponentially growing since its exposure.

Now, let us talk about a different idea, which can make you think out-of-the-box. You may be aware of the Sonos – the wireless smart speaker for your home. With the help of Sonos, you can connect up to 32 components. So that, the entire home fills with music.

Emerged in 2002, Sonos is the whole-home smart speakers. According to the report, “the company, Sonos has raised $135 million in a growth equity round of funding in the year of 2012”.

Also, in order to improve the usability, they came up with the Sonos controller App in the year 2014.

When it comes to controlling Sonos, users need to connect it with the app on their smartphones, simply. It allows the mobile app users to play music or podcasts, which can be stored on the Smartphone or Tablet. Furthermore, according to the latest report from The Verge, “Sonos speakers can now work with IFTTT.” It means that its app users can easily automate their music.

The Sonos controller app makes easier to find and control the music for app users. Check out its top features of Sonos Android app:

One of the major features of Sonos controller app is that it provides app users – the simple navigation. The Navigation bar of the app provides essentials like My Sonos, Rooms, Browse, and Search option. So, considering these essentials in music streaming app play a vital role if you want to build a music app for the Sonos-like wireless home sound system.

Allows App Users to Control the Music in Any Room

You may be aware of with the fact that – the Sonos can connect with up to 32 devices, and it can fit any room size. Therefore, considering this feature to build like Sonos controller app, it allows users to control the music in any room through “Rooms Tab” option in the Sonos controller app. The room, which is currently controlled by the user, will be highlighted in the black color as shown in the image below: 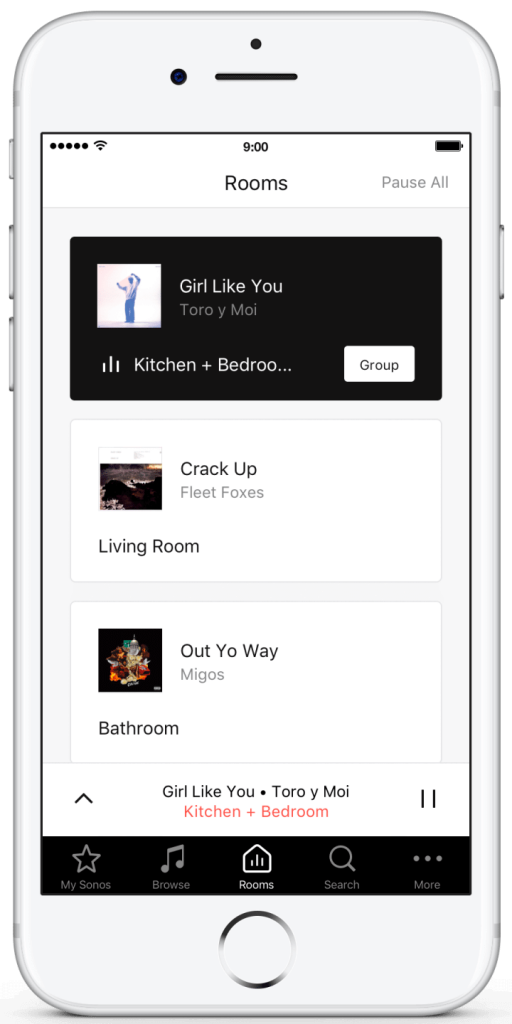 In order to control the music within the app, the app users can select the option “Room Selection” drawer, which is displayed on the ‘Now Playing screen’. By tapping the “name of the room”, the user can listen to the music from the room selected by him.

After going through with top features of Sonos controlling app, you can pick ideas from the aforementioned attributes, but first, you need to validate your music app idea with us. Let’s see how you can do this.

With the increasing demand for developing apps like Sonos, make sure you do not make a mistake while finding and hiring android app development company.

Herein, we have analyzed top features of SONOS controlling app, which can make the Home sound system like Sonos more likable among users. If you have better ideas or features, which you can include in to make your own music app, you can discuss with us. We will get back to you with the optimal solution.

Still, if you may have confusion or have queries related to music streaming app, all you need to get in touch with us through the given form in below, we’ll revert you within 48 hours.

How to Apply Custom Font in Notification Title (RemoteViews)?

Browse Through These Features of Queer Dating App – Thurst. How is it Changing the Game?