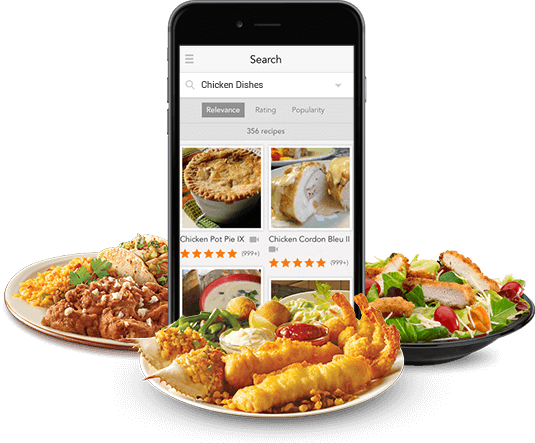 Out of these iPhone / iPad users, approximately 22 Million people who live across the U.S., Canada, U.K., Australia, and India have searched for food recipes and cooking in iPhone / iPad category.

This means, 1 out of each 5 iPhone / iPad users are interested in cooking and food recipe category. And there are three types of users of recipe mobile apps.

Now assume that you’re building a freemium-based food recipe app for your target audience. And you’re charging as a minimum like $1 for in-app purchases.

Also, don’t forget that the data is just for iOS. You can imagine how big and profitable it would be for developing food recipe apps for Android.

And as you probably know, mobile applications are making our lives easier by not leaving a single part of our lives untouched. Not even the kitchen. Today the healthy recipe apps offer step-by-step instruction guides to curating a monthly breakfast plan and even shares amazing recipe tips and tricks. In simple words, a food recipe app converts the smartphone into a cookbook.

There are different types of food recipe apps. Some of those best recipe apps Android cater to the needs of chefs, while others are useful for anyone who’s struggling with basic recipes. In fact, there are also all-in-one recipe apps and apps that focus on a specific functionality such as listing ingredients for recipes and providing step-by-step instructions.

However, whether it’s an all-in-one food recipe sharing an app or specific functionality focused app, the most successful food recipe apps share similar qualities. They all have a simple design that combines mouth-watering food images with its ingredient lists, and instructions to make it.

At Space-O, we’ve already worked on such Food Recipe App Development projects with different clients. You can access our best recipe apps portfolio from here. And what we’re going to do here is, we’ll look into the most successful food recipe apps and identify what makes them popular.

After taxi apps, the healthy food recipe apps are next in the race of mobile takeover. It is a lifesaving solution for many people who have no idea of cooking. And once you check out the below comparison between top recipe apps, you’ll have a better understanding of what type of food recipe app works in the cooking app industry.

Now, let’s get started with top food recipe apps or we can say best cooking apps of all-time.

How should an ideal food recipe app look like?

Remember that the recipe app industry is no longer limited to recipe information only. Therefore, you need to consider the top features of best food recipe apps before developing your own.

In fact, the food channels and networks are also developing their own recipe apps to tap the recipe and cooking app industry. So in order to make your recipe app vital to your target audience, you need to consider the best features of top food recipe apps. And with a couple of certain features and flawless UX, you can too enter the cooking industry with your own food recipe app.

Also, keep in mind that there are already 300+ recipe apps or best meal planning app on both platforms. This means it takes attention to detail and a well-thought-out design in order to build a food recipe app that has a chance of winning in the industry. So if you’re really interested in developing a recipe app, ask yourself these questions:

If you don’t have answers to these questions, then don’t worry. You can cross-verify these questions with us as we’re a native mobile app development company, and have already over 3500 apps along with unique features and functionalities.

In case, if you still have any query or confusion regarding grocery list app development, best healthy recipe app development features, develop a meal planner app or soul food recipe apps development, then you can get in touch with us through our contact us form. One of our sales representatives will revert to you as soon as possible. The consultation is absolutely free of cost!