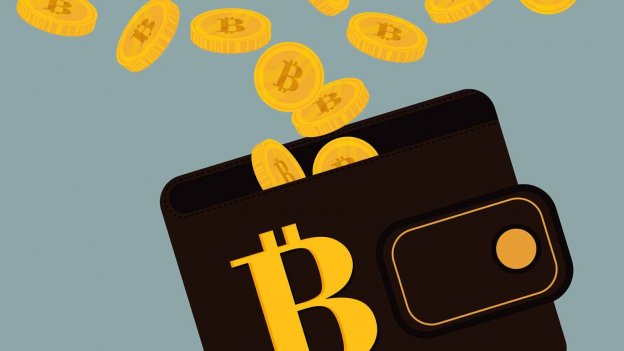 Today, a lot of people are becoming familiar with bitcoins as this cryptocurrency has become the most popular and profitable resource for investments. In the last five years, it has been grown by more than 560 times.

Moreover, the term cryptocurrency states for a medium of exchange, which works the same way as any other currency like EURO and USD. However, the main aim of it is to ensure the security of transactions and keep under control the entire process of new coins creation.

An Introduction to Bitcoin and Bitcoin Wallet Apps

Talking about Bitcoin, it is the first virtual currency created in 2009 by an unknown developer, called Satoshi Nakamoto. Transactions can be made with no middlemen – meaning there will be no banks in the middle.

Now, you might be thinking about Bitcoin wallet, it is just like a regular bank account making it a lot easier to send, receive, and store bitcoins. Generally, there are two types of Bitcoins wallets, including hardware and software.

Currently, Coinbase is the best Bitcoin wallet app that is at the top of Apple’s App Store, beating Snapchat, Instagram, and YouTube. Across the world, Bitcoin-related apps are highly in-demand than ever.

Even, the new numbers from Sensor Tower, an app marketing firm, highlights just how much Bitcoin’s current surge has impacted the wallet apps in the Google Play as well as Apple App Store. 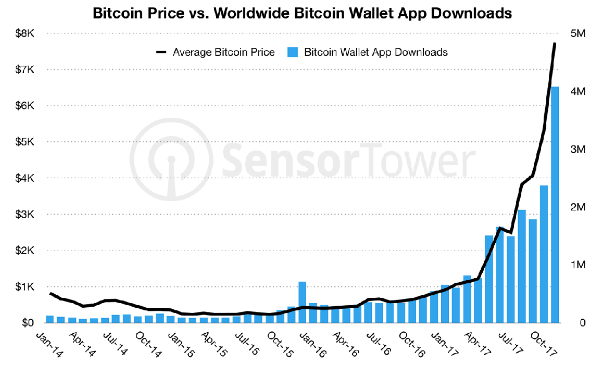 Bitcoin wallet apps have been downloaded more than four million times as you can see in the above-given graph. It shows year-over-year growth of approximately 800% since November 2016.

One of the most important features that you can include in a bitcoin wallet app is allowing users to transfer bitcoin easily and instantly. Earlier, when it comes to transferring money, it takes a certain period before the funds become available.

And, banks usually charge transaction fee from both parties’ recipients and senders. But now, you can allow people to transfer money instantly using your bitcoin wallet app as it will make the process far faster and oftentimes with no fees.

2. Automatic Generation of a new Public Key for Every New Transaction

While creating a bitcoin wallet app, it is a must-have feature that you can consider as it will work wonderfully in terms of privacy and security. Considered as a lot easier feature to implement, it will make it quite difficult for frauds to follow the ownership coins.

When it comes to Two Factor Authentication, it is also known 2FA, and it is an additional level of security that is known as “multi-factor authentication” that needs not only a password & username but also something, which the only user
has with them like information or have an instant to hand like their presence.

It is another important feature that can enhance the security of all the transactions that bitcoin app users are performing. Moreover, it will be smart to allow users to decide whether to allow 2-factor authentication or not, developing this feature won’t make it hassle for users that’s for sure.

Apart from the above-mentioned security feature, you can also provide your app users with one additional security protection measure that is an auto-logout feature. This highly secure and safe feature won’t allow strangers or any other person to use the wallet if a smartphone has been stolen or lost.

Recurring billing and invoicing is another essential feature that plays an important role for all those people, who are using Bitcoin wallet apps for their business.

The recurrent payments will save a lot of time of the users and make it easy for them everything. So, including this feature can make your bitcoin wallet app apart from other apps.

So, these are some of the highly important features that you can include in your bitcoin wallet app to make it successful from other bitcoin wallet mobile apps that are already obtainable on the market.

Blockchain – Bitcoin Wallet is also the best digital wallet app that allows using bitcoin and Ethereum safe, simple, and fun. You can securely store your funds and easily transact with anyone across the world. There are more than 17 million people, who are using this application. It also provides the best in the class support team that will be always there for you.

Now, you can have your Bitcoins always with you in your pocket with Bitcoin Wallet application. You can instantly pay by scanning a QR-code. Being a merchant, you will receive payments reliably and instantly. Moreover, this Bitcoin Wallet is the first mobile Bitcoin application that is considered as the most secure.

Zebpay is a lot simpler yet easier bitcoin exchange with more than 1 million happy users. Featured in Zee Business, The Economic Times, Times of India, the application can be used to purchase and sell bitcoins in India. They can send and receive bitcoins as easy as instant messaging. Using this bitcoin wallet, you can easily send bitcoins to contacts with just their mobile number.

Though developing a bitcoin wallet application that is powered by Blockchain is not as hard as it sounds, but working with this advanced technology needs a high level of understanding and proficiency in development.

As bitcoin wallet apps have already secured the place in the most-up-and-coming business ideas. So, you can also have your own exclusive Bitcoin wallet application, just hire an iPhone app development company that has expertise in developing wallet apps.