One of Apple Music’s biggest competitors would be neutralized by the acquisition and probably hand the tech giant Tidal’s impressive roster of exclusive artists by expanding Apple’s footprint in the music streaming space.

Early, Apple efforts in music streaming as an interesting sort of Rorschach test.

Apple, the world’s richest company, has cumulated only 50% of the paying subscribers, as category leader Spotify in a year’s time. Moreover, Apple only takes one year to convince 15 million people to pay for its streaming service. And, Spotify took around 7 years to persuade subscribers like Apple. 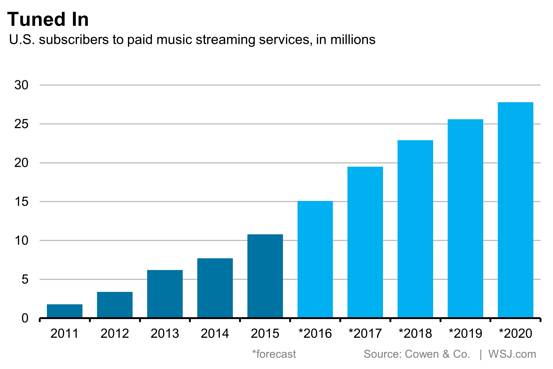 Beyoncé and Kanye West released their latest album through Tidal, one of the best streaming services run by Jay-Z and co-owned by several other top-selling music acts. Tidal has helped the service gather 4.2 million paying subscribers. The talks between Apple and Tidal are continuing, however, the cost is still unknown.

Last year, Tidal enjoyed $6.7 billion digital music sales revenue, which is 10% up from the prior year. Subscription streaming was 32% of total digital revenue in 2015, which is 23% higher compared to the year before.

The second point is, Apple Music is already fixed on most of the company’s devices in action. It’s a huge addressable market. According to the Cowen, Apple Music subscribers comprise 2.5% of active iPhone in the market. It’s beneficial that somewhat balances offset an awkward user interface. Purchasing Beats before two years may help Apple to start its streaming efforts. However, Apple is interested in Tidal.

At What Cost Apple Would Purchase Tidal?

One thing seems to be positive: here, we find different situation from when Tim Cook, Eddy Cue and company paid $3 billion for Beats two years ago. After, it was acquiring several executives like Jimmy Iovine and Dr. Dre, including the Beats Music team and a hardware business that was selling many expensive headphones.

On the other hand, Tidal has much less to give to its users. It some ways Tidal would be a tuck-in or a take-out. According to the Wall Street Journal, Tidal has about four million paying subscribers whereas Apple Music has 15 million. Apple’s subscribers can’t be moved over to Apple Music automatically, but Apple should be able to convince most of them. We can say Jay-Z brings to the table for artist relationships and consumer marketing.

Possibly, this deal would take Tidal out of the market, as the competitor for artist exclusives, which have made much of its buzz. This likely means Apple would not have to think about not being able to stream the new Kanye West album.

Apple Possibly Doesn’t Have Much Competition

Right now, Apple didn’t find any competition, as Samsung walked away from its earlier talks with Tidal, Google owns its own streaming service and Spotify can’t afford it. Owning Tidal would give fewer options to the listeners. Moreover, if it put some more interesting music in one application, then Spotify users also have to switch to Tidal.

How to Integrate Alamofire in Your Swift App Development Project?

It Seems Hard at First. But These 4 App Design Fundamental Can Drive You Towards The Prestigious Award in The World