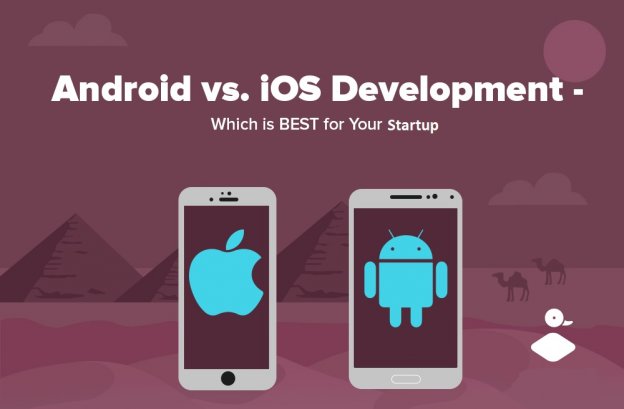 But, according to Fastcompany, Apple sold more phones than Samsung in quarter 4, 2016.

Despite the fact that number of activated Android devices is higher than Apple, yet a lot of app startups build iOS app first. In fact, Instagram launched on Android platform 18 months after iOS. Nike’s mobile app – Nike+ FuelBand – still hasn’t made the leap. Furthermore, much praised child’s app maker Toca Boca has 18+ apps available on iOS platform, only one of them is on Android platform.

Today, Entrepreneurs can’t think of a business without smartphone. And, to stay in competition, iOS is the best platform to offer services efficiently. For any business or startup, preference of its target audience is a major factor to consider when selecting a platform for startup app development.

If a business is made around an app, iOS platform helps it generate desired revenue. In fact, iOS apps generate 85 percent more revenue for their owners in comparison to Android. In addition to this, the iOS application development has several more advantages over Android and other platforms, and today we’ll learn about these advantages offered by iOS app development platform.

Experts have been comparing iOS and Android platform for quite a time now and they’ve concluded that iOS apps are more beneficial. Developing iOS apps means making sure that they work nicely on small range of iPhones and iPads.

On Android platform, it’s a different story. More than 12000 Android devices out there with wide range of processors, screens, and versions. Yet, many developers lack the enthusiasm because the resources required to support them once they’re launched is a critical concern.

Experts always recommend to create iOS app, and iterate that app over a couple of updates to obtain feedbacks from their users. Number of apps developed on Android platform do outnumber number of apps on iOS, but when the quality is taken into accountability, iOS apps are winner.

Payment apps, shopping apps, and many other apps transfer sensitive information to their servers. And, in this scenario, iOS apps have always proved to live up to the expectations.

The app approval process of App Store in iOS platform is strict enough for not allowing malicious apps pass through it. Apple has put up so much emphasis on safety that regardless of their sizes and types, they’re all safe apps.

Unlike Android, which is supported by huge range of devices in market, the iOS devices are always compliant with each other. This means, it becomes quite easy for iPhone app development company to focus more on development, rather than compatibility of the mobile app running on different devices.

Moreover, the whole iOS software ecosystem is controlled by Apple itself. The OS of Apple is a close-source, meaning no one has permission to make changes in it.

Apple manufactures all its devices thus Apple has full control over its core software, where Android OS can be modified by mobile manufacturers. In fact, Apple has advanced its functionalities, increased processor speed, and added huge storage space so that businesses can build feature-rich applications and provide their services most efficiently.

While both platforms have their advantages and disadvantages and Android does allow you to reach a broader audience, but Apple’s audience is more engaged and loyal. This means, Apple users tend to stay with Apple, rather than switching to Android or other platforms. Moreover, for businesses and startups, attracting loyal audience in the marketplace is a key factor to keep their brands on forefront and boost company’s revenue.

Have an iOS App Idea for Tech Startup? Let's Discuss!

Who Else Wants to Make Money Fast Through a Shopping App Like Wish?

List of 12 Car Pooling and Ride Sharing Apps That Are Doing Surprisingly Well in 2020, Despite Heavy Competition From Uber & Lyft