After sending requests for proposals or posting the job, you can sit back and watch the proposals roll in. Most proposals will appear in the first one or two business days after the posting is created. A few might come in on the third day, but by the fourth day you probably have all the proposals you will receive, so if you are ready to proceed at that point then there is no reason to delay. The same is generally true for proposals from contractors found through direct search. Start evaluating the proposals to select a developer.

For providers you found by direct search, don’t be surprised if 50% of them do not respond to your inquiries, or reply initially but then do not respond with a proposal in a timely way. It might be surprising, but this is typical. You may have experienced similar instances in your personal life, for example you leave a message with three different plumbers but only one bothers to call you back. If you contact 10 app developers directly and you end up with eight proposals, then you did a great job of selecting developers to contact.

For directly contacted developers, there is probably no need to do an initial screening since you probably only have a handful of proposals. For jobs posted on freelance sites, though, you may get 25 or 30 proposals, or even more. Many of these will be so unqualified that you can eliminate them immediately. If you get numerous of proposals on a freelance site, the first step is to make an initial screening pass. Before spending time closely evaluating proposals, let’s get rid of the definite rejects. Reject any proposal from any source for these reasons:

The goal is to get down to a manageable list of about five of the most qualified programmers with a demonstrated track record. If the initial screening still leaves more than five potential outsource programmers, then additional intermediate reviews are needed to get down to the final list, each iteration going a little further in detail. For each stage, create a list of criteria that programmers have to meet in order to move on. For example, the next iteration could eliminate proposals outside a price range or a geographical region. Another review could focus on the relevance and quality of samples provided. 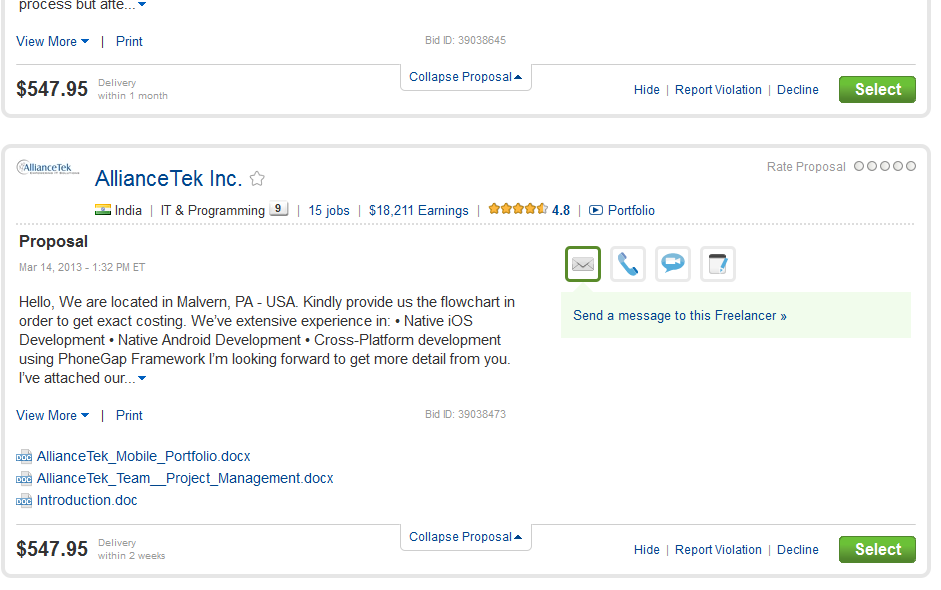 The goal in the early provider reviews is to eliminate proposals that don’t fit, so later you can concentrate on the ones that do. Most sites have a way of declining or ignoring proposals, so the list of prospective proposals will shorten. As you review the proposals in more detail, it becomes apparent that a set of proposals rise above the rest.

These are the finalists. Again, make sure all your finalists are the original source of the app programming. Avoid dealing with middlemen who add little value but will increase the cost by 50%-200%.