Establishing project milestones and estimated delivery dates are also part of these early discussions. Timeframes and delivery were part of the proposal and selection process, but those were only rough estimates. When you start reviewing the project in detail with a developer the project schedule should always be part of the discussion. Start with an overall, major project milestone list or map to share with the developer. For example, if an app has three major functional sections, finishing and demonstrating each segment is a milestone (with a partial payment), The final integration is a milestone. Testing and acceptance will be the last milestone. Each of these milestones maybe three weeks apart – at least as a starting point.

While discussing the projects, more milestones may come up or time frames altered.Again, be open-minded when the developer makes suggestions, but stick up for your interests as well. 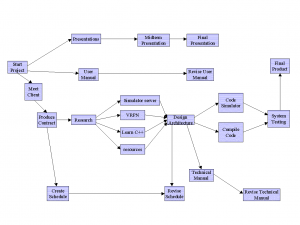 A PERT chart shows the sequential relationships between project and develop-ment activities. Include completion dates as well

At the end of reviewing the app design, a complete milestone and schedule that both parties agree to should be a required outcome.

Toward the end of these initial project discussions, consider creating a PERT chart. PERT charts show the relationship between project milestones – particularly what milestones must be completed before starting other activities, and what activities can be done separately in parallel. For example, you don’t have to wait for the app code to be completed before you start taking steps to market or distribute the app. We will explain this in more detail in the marketing chapter.

It is important to remember the importance of going into great detail when reviewing the app concept design. Go over every screen and function along with every user action and response until you are sure the programmer understands your intentions. Do not assume the programmer will intuitively know or understand something. While you should be delivering detailed screenshots (if not the graphics themselves) and functional flow charts, some nuances may not be captured in these documents, or something may have been overlooked that will be seen here. Take careful notes and mark up descriptions, drawings, and charts as needed. Then the developer(s) will have carefully reviewed and accurate documents to work with as they begin writing the code.

"After spending a lot of time researching online, I settled with Space-O due to the reviews and the fact that their site claimed that conversion of excel spreadsheets to apps was a specialty (which it is). The team offered an innovative approach to mitigate communication barriers. The best thing is – the app operates and flows exactly as I had hoped! Saving many man hours and waste through simply using this app as opposed to how things were previously done. Space-o Technologies did everything I asked to them and provided the exact product I was looking for. I intentionally left the project open ended. It is my desire to see this app adapted by other municipalities along the Front Range of Colorado in order to Standardize and streamline the audit process. Looking forward to work again with Space-O. Cheers, team!"