Some claim that the early days of the internet were like the Wild West; wide open and no rules or guidelines. Brave and smart could compete and even win over big and powerful. In spite of the fact that that big companies control most of the traffic these days, the Internet still presents great opportunities for small entrepreneurs.

The popularity of smart devices and the wide open range of the apps market it has created, is, in a sense, the new frontier.

No one company is dominating the app market:

There is no Microsoft or Google of apps. Can you name an app company? Probably not. While there are a few well-known development sources, the overwhelming majority of apps are developed by small startups or individuals.

The smart device market is ever-growing:

Billions of people around the world own at least one smart device and over the next few years billions more will. Between 2011 and 2012 alone the percentage of adults in the U.S. with smartphones went from approximately 1in 3 to about 1 in 2. By 2015 it is likely that 75 to 80% people will own at least one smart device.
Every smartphone user downloads apps- perhaps dozens of them. So it only makes sense to say that the apps market could be exponentially larger than the device market. 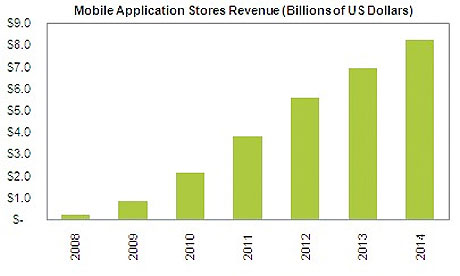 Application sales are projected to have continual growth for the coming years. (Source: http://arstechnica.com /apple/2012/05/ios-app-success-is-a-lottery-and-60-of-developers-dont-break-even/)

Developing an app is not overly complex.

Most apps perform basic functions; making them easily developed using the skills of most talented coders. Apps can be sophisticated; using high levels of rules and processing or complex interactions with data sources. But they don’t have to be and frequently aren’t.

These facts make app development attainable and affordable for even the smallest businesses. There are also numerous tools-many of them being free. This fact adds to the simplicity and ease of developing your own app.

The app market is growing dynamically.

The two main reasons for the constant growth and development of apps are the facts that apps are inexpensive to develop, making them inexpensive to buy. This means that not only will a device owner buy multiple apps, he/she is also willing to buy multiple apps for the same purpose. There is little risk in spending a few dollars to buy a different app you may like better than one you already have. And as for game apps, there is literally no end to the amount of games a user may buy.

So while the smartphone market growth may have a few dips and peaks during periods when new product development isn’t in sync with market saturation, the app market shows every indication of remaining strong with apps for Apple devices being projected to have a large majority of the share of that growth.

These are just a few of the reasons that the app development market should be considered an open frontier with great opportunities for the smart and the brave. A good idea combined with initiative and a minimal investment can make you a viable player in the world of app development and marketing.

"The app was successfully launched and fulfilled original expectations. The Space-O Technologies team was communicative and effective in completing the project. The app is available in the Google Play store, and we’re thrilled with the final product. They were a highly efficient team to work with. They were strong communicators—whenever I had an issue they were available. Additionally, they were timely in getting deliverables to us."